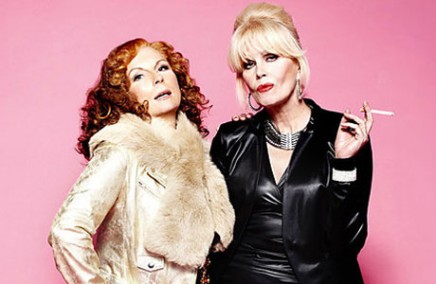 The beloved cult series has had an exceptionally erratic history – it  ran for three seasons on the BBC between 1992 and 1995, had a two-part “finale” television film in 1996, was resurrected for two more seasons from 2001-2003, then had a few one-off specials until it finally (we thought) ended for good in 2005. It returned (again) for a trio of anniversary specials in late 2011, and that’s been the last we’ve heard of it. But not for much longer apparently.

Saunders appeared on Jonathan Ross’s late night chat vehicle The Jonathan Ross Show recently and confirmed that she has agreed to write a script for a feature film version of the popular comedy. She says she’s also made a bet with her comedy partner Dawn French that she (Saunders) has to pay her £100,000 if she doesn’t come through with the big screen adventures of Eddie and Patsy. So hopefully that’s motivation enough for anyone!

Watch the full interview with Saunders below. It’s hilarious and rather charming, so if you’re in any way a fan of her work it’s worth the ten minutes:

Rumors about an AbFab movie have been swirling for some time now – largely due to co-star Joanna Lumley, who kept insisting that the movie was happening and a script was in progress during various interviews. This tactic seems to have actually been quite successful, as Saunders cites Lumley’s comments as a major reason (outside of that massive cash bet, one would assume) as to why the film’s happening at all.

No idea when we might reasonably expect to see a movie like this come to pass, but that's okay. It's enough to know that it legimately seems like it’s going forward - though possibly not any time in the near to foreseeable future. That’s okay. We can wait. The champagne and Pop Specs will keep.

What about you? Would you watch Eddie and Patsy in a movie?