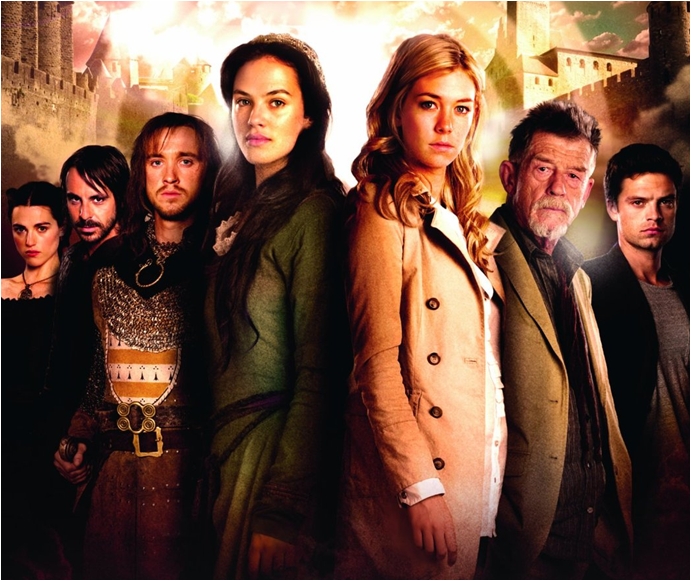 Look at all these familiar faces in "Labyrinth"! (Photo: Channel 4)
If you’ve been missing Lady Sybil on megahit costume drama Downton Abbey, you’ll be glad to know that you’ll at least be able to see her portrayer on your television screens again very soon.

The period fantasy series Labyrinth, which aired on the UK network Channel 4 last Spring, is finally making its way Stateside. Teen-focused network the CW announced at this week’s Television Critics Association Winter Press Tour that they have picked up the drama as an “event” series for 2014.

A four-hour fantasy series, this drama is based on Kate Morse’s best-selling global hit novel of the same name. The novel interweaves the stories of two women born centuries apart. Present day archaeologist Alice discoverers two shattered skeletons and a labyrinth-engraved ring in a cave, while 800 years ago in medieval France, a young herbalist named Alais is entrusted with hiding the secrets contained within three sacred books. All of these things do connect eventually, and concern the search for the Holy Grail.

Watch the UK trailer for Labyrinth below:

"It's the right acquisition," the CW president Mark Pedowitz said after the network’s panel. "When this became available from Tandem Communications and Ridley Scott's company [Scott Free], we knew that we were doing Reign. This is set in the 13th century and thought this could be a fun companion piece, particularly when Reign ends its run for the season."

No word on specific airdates for this series just yet, but given Pedowitz’s commentary above it looks likely that we’ll see Labyrinth at some point in the Spring. We’ll keep you posted!

Thoughts on the trailer? Does this show seem like something you’d watch?