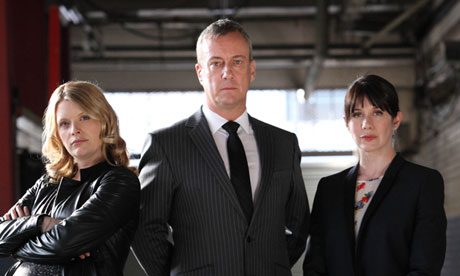 Gritty contemporary mystery series DCI Banks was officially renewed for a third season last June, but we haven’t heard much about what Series 3 might look like.

Happily, that’s no longer true, as we now officially have our first look at the drama’s next set of episodes.

DCI Banks will return for a new six-part series starring Ballykissangel’s Stephen Tompkinson, Andrea Lowe and Doc Martin’s Caroline Catz. Series 3 will based on three of Peter Robinson’s  novels, and two episodes will be devoted to each of the three stories entitled Wednesday’s Child, Piece of My Heart and Bad Boy.

Now ITV has released the first trailer for DCI Banks Series 3 and it has the same dark and gritty feel we’ve come to expect from this show. It’s also surprisingly tense for something that’s only a minute long.

Per the official press release the new series will see DS Annie Cabbott return from maternity leave, explore whether a romantic relationship between Annie and Banks can ever be a reality, and introduce Banks’ university dropout daughter Tracy.  DI Helen Morton is also returning and she, Annie and Banks will have to sort out how to work together as a team.

The first story, Wednesday’s Child, which revolves around a strange and sinister child abduction undertaken by a man and a woman claiming to be social workers, will be written by lead writer Robert Murphy and Rob Williams. Murphy will also adapt Piece of My Heart, where the body of a journalist in a remote village connects Banks to a death in the 1980s revolving around the surviving members of a cult band.  In the final story Bad Boy, which will be written and adapted by Cath Tregenna, a terrible chain of events is set in motion by the discovery of a loaded gun in a young girl’s bedroom, that ultimately puts Banks’ daughter in mortal danger. Dun dun dunnnn.

No word yet on an official UK transmission date, though if history is our guide given ITV’s general pattern of trailer releases, we’re probably still a few weeks to a month away. The drama is scheduled to become available to public television stations here in the States this April, so keep an eye on your local listings to see when Banks, Cabbott and Morton will be returning to a TV near you.

Thoughts on the trailer? Are you excited for the new season? What would you like to see in it?