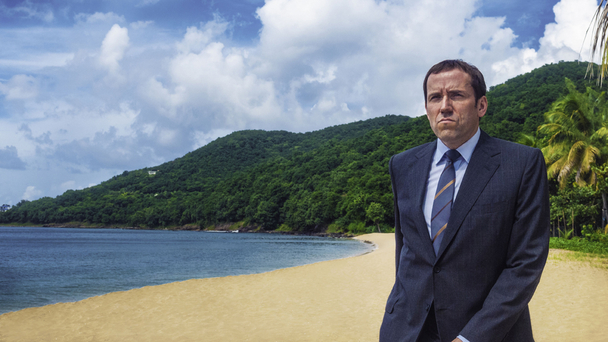 The popular mystery drama – which follows the story of a grumpy Detective Inspector who must investigate murder on a tropical island – will be back for a third season, but maybe not quite the way you think.

The mystery series has proven quite popular with fans on both sides of the pond, so much so that it was renewed for a third season early last year.  However, soon after news broke that the series’ would be returning, it was revealed that Death in Paradise would be undergoing some significant changes in its third year.  Star Ben Miller, who plays DI Richard Poole, a rather grumpy, quintessentially English (read: stuffy) detective who ends up solving cases in a tropical paradise, announced in April that he had decided to leave the show.

His DI Poole will consequently be written out in the third series, and Miller will be replaced by actor Kris Marshall, whom most of you will recognize from comedy My Family, or, more likely, as the rather bumbling Colin in the popular romantic comedy Love Actually, who travels to Wisconsin to find an American girlfriend.

Marshall will play a bright , but rather disorganized and gawky DI named Humphrey Goodman, who is stuck in a mid-life rut and is looking to find a new life and fresh start.

"I have absolutely loved my time on Death In Paradise and am sad to be leaving such a successful show,” Miller said. “However DI Poole has made no secret of his struggle with the Caribbean heat, so I felt now was a good time to put him out of his misery! I know Kris will do a superb job and I'm delighted to be handing over the detective baton to him.”

The BBC has released the first trailer for Series 3, which you can watch below. WARNING: If you’d rather be surprised by the storyline of how and why DI Poole leaves the fictional island of Saint Marie, I’d recommend you NOT watch this clip.

The third series of Death in Paradise is slated to begin this January in the UK, and will likely hit public television in the States later this year, though no firm dates have been set.  We’ll keep you posted.

Are you a fan of Death in Paradise? How do you feel about this cast change? Are you curious or furious?