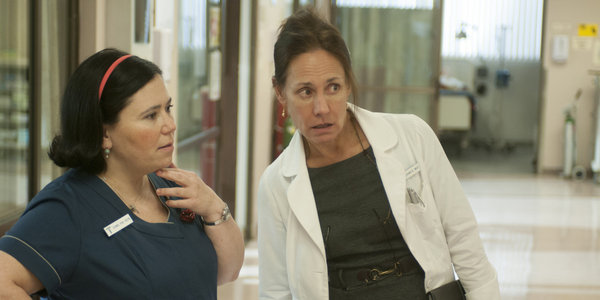 Not exactly the NHS, is it? (Photo: HBO)
Another American version of a British series is headed to a television near you – though this one actually looks kind of entertaining. Possibly because it’s from HBO, which has already had some success adapting a British comedy for American audiences in their Emmy-winning Veep, which is a somewhat roundabout remake of political satire The Thick of It.  (Honestly, the two shows are so different it feels strange to call Veep a remake, though they share a creator. But it seems fair to say it’s at least “inspired by” the British series..)

Next up, HBO is producing an American version of Getting On, the popular BBC Four comedy series about nurses working in a geriatric extended care wing of a National Health Service hospital. The US version will be comprised of six half-hour episodes, and will be set in a down-at-the-heels extended care facility in Long Beach, California. The comedy will star Roseanne’s Laurie Metcalf alongside Alex Borstein, Niecy Nash and Mel Rodriguez.

Watch the trailer for HBO’s new comedy below.

Getting On Season 1: Trailer (HBO)

Getting On is about the put-upon administrators, doctors, nurses and staff who work at this facility, and deal with the frustrating realities and dark humor that come along with it.

The British version – which ran for three series from 2009 to 2012 - was created by and starred Jo Brand, Vicki Pepperdine and Joanna Scanlan, all of whom are serving as executive producers on the American remake. HBO’s take on Getting On comes from producers Mark V. Olsen and Will Sheffer, who are best known for the network’s successful and occasionally controversial polygamy drama Big Love.

For those who are curious about what the original British version looks like, in comparison to the HBO trailer above, here’s a clip:

Getting On - Comedy on BBC Four - Lost stool sample

How does the American version of Getting On stack up against its British predecessor? We’ll have to wait and see. The series premieres tonight/November 24 on HBO. Does it sound like something you’d watch?