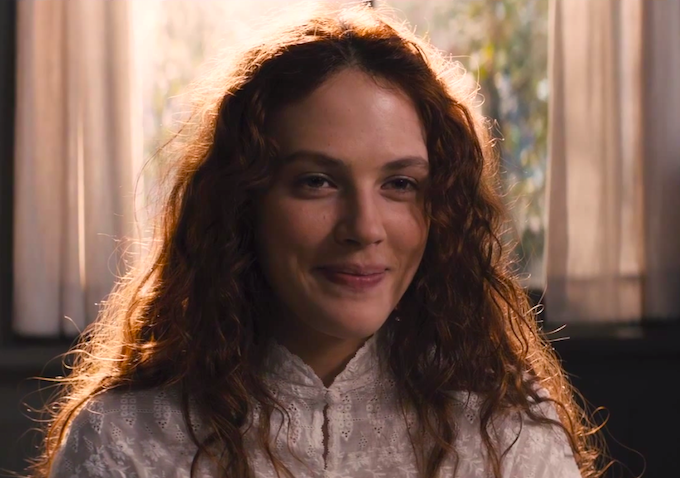 Lady Sybil no more. (Photo: Warner Brothers)
We’re getting ready for our first full season of Downton Abbey without Jessica Brown Findlay’s Lady Sybil, but you can still see her at your local multiplex this Spring. Findlay’s first big Hollywood role will be in an adaptation of Winter’s Tale, alongside such recognizable Colin Farrell, Russell Crowe and Jennifer Connelly

This film is based on the novel by Mark Helperin, not the Shakespeare play with a similar title, before anybody gets their hopes up about Findlay playing Hermione or anybody exiting pursued by a bear. (Seriously, Hollywood, someone make that movie.)

Anyway, the story goes like this: A thief named Peter (Farrell) breaks into a wealthy man’s home, sparking a relationship with his terminally ill daughter, Beverley (Findlay). There are some unclear complications, which appear to involve Crowe as some kind of evil Irish gangster who may actually be a demon or something. Luckily, Peter and Beverley’s love is epic enough to also involve time travel and possible reincarnation, as Peter finds himself in modern day New York, looking at mimeograph photos of Beverley with Jennifer Connelly to help him remember his past. What happens after that? Why is Peter there? What happened to Beverley? Who knows.

But this trailer sure does make you want to figure out what’s happening.

Kudos to whoever put that preview together, because it’s gorgeous and even though it only gives you the only the vaguest and most basic sense of what the movie is about (and seriously if anyone knows what’s going on with the white horse that also appears to have time traveled, do clue a girl in), it certainly does a great job of making you want to see it.

Winter’s Tale opens on Valentine’s Day in 2014, so it’s probably got the weird romantic date movie market all sewn up already. For those who can’t get enough of the dearly departed Lady Sybil, Findlay will also be starring alongside Harry Potter’s Daniel Radcliffe in Frankenstein, but that film likely won’t screen until later next year.

What do you think of Findlay’s post-Downton career choices? Does Winter’s Tale look like something you’d want to watch?