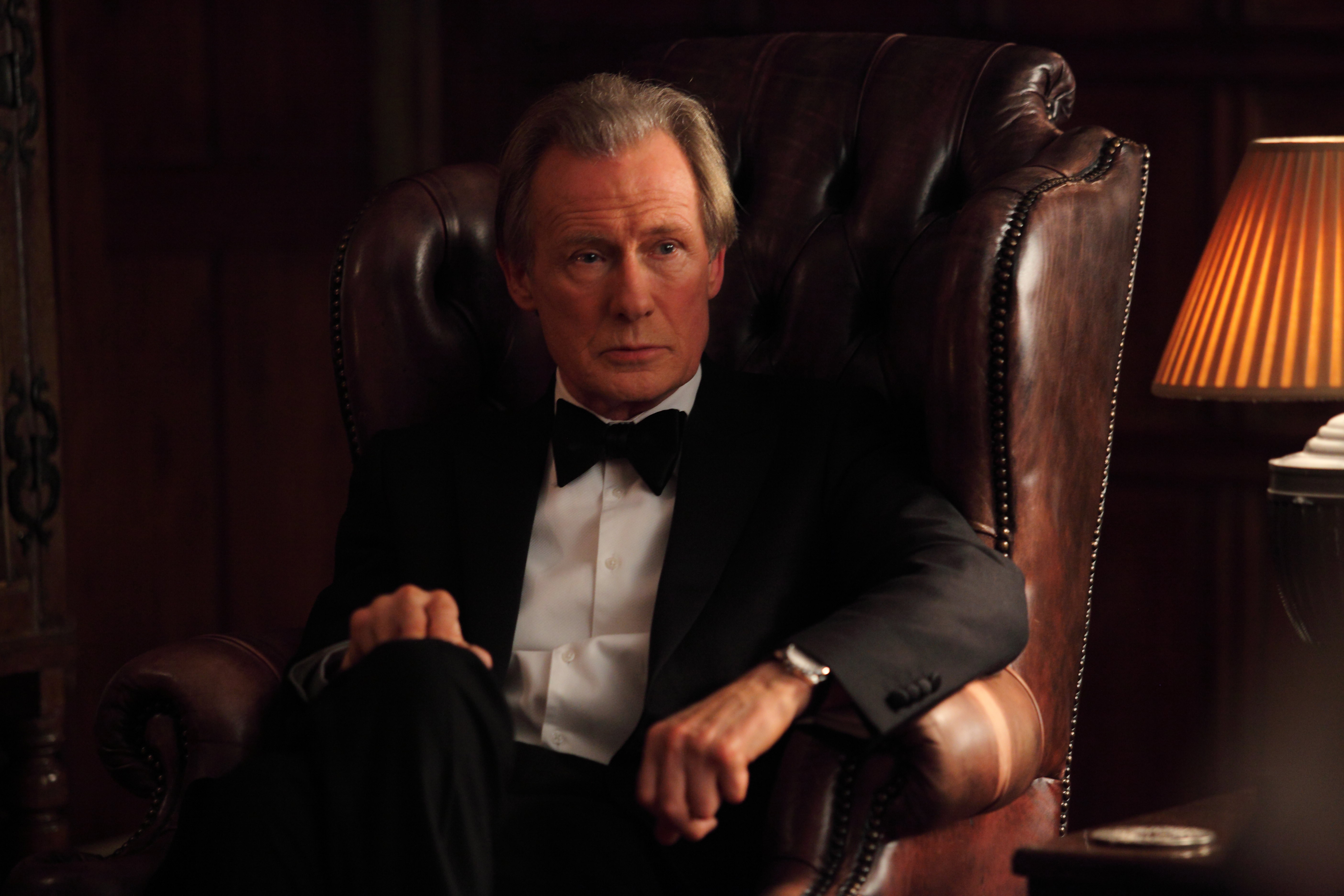 Bill Nighy as spy Johnny Worricker in "Page Eight" (Photo: Courtesy of © Carnival for MASTERPIECE)
Our British Actors You Should Know series is on a bit of a trend lately where we talk about actors that you probably actually do know, you just may not realize it yet. Bill Nighy is another one of those people, a total “Hey! It’s That Guy!” kind of actor who has actually been doing film, television and theater work for decades. So, don’t be surprised if you have a few moments of “Oh, that was *him*?” as you go down this list of some of his more memorable performances.

Confession time: Nighy’s list of accomplished – or at least interesting – performances is so long, there’s no way it would fit in one blog post. These are highlights, at best, of an exceptionally long and varied career as one of Britain’s finest character actors. If you like any (or all) of these roles, there are definitely more where they came from. (And if you have a must-see Nighy performance that didn’t make this list, tell us about it in the comments.)

The Best Exotic Marigold Hotel. This is a wonderfully charming and sweet film about seven elderly Britons who all respond to an online ad for a retirement community in India for a variety of reasons. Their stories end up crossing in a variety of surprising ways, and it’s a lovely look at life and relationships and getting older. Marigold Hotel is also basically a festival of British acting talent, featuring Dame Judi Dench, Dame Maggie Smith, Penelope Wilton, Tom Wilkinson, Celia Imrie, and Dev Patel alongside Nighy. It’s wonderful. (And apparently a sequel is happening!)

The Constant Gardener. This 2005 drama/thriller follows the story of a British diplomat (Ralph Fiennes) as he tries to solve the mystery of his murdered wife Tessa (Rachel Weisz), who was attempting to uncover the truth about dubious drug tests being performed in an African village. Nighy does a wonderful, understated job playing a villainous government minister, who is complicit in all kinds of shady activities.

The Hitchiker’s Guide to the Galaxy. This is a 2005 film adaptation of Douglas Adams’ beloved novel of the same name. Sherlock’s Martin Freeman stars as Arthur Dent, a man who  discovers that his house is to be immediately demolished. His friend Ford Prefect, convinces him to go to the pub with him and confesses that he is both an alien from a planet in the vicinity of Betelgeuse, and a journalist working on the Hitchhiker's Guide to the Galaxy, a universal guide book, and that the Earth is to be demolished later that day by a race called Vogons, in order to make way for a hyperspace bypass. Then it just gets stranger after that. Nighy plays Slartibartfast, a  planetary construction engineer who, who not only has the longest name of anyone in the story, he also gets to rock the coolest outerwear. This seems to be kind of a thing for Nighy. (See also: Underworld, below.)

Love Actually. Even if you’re only passingly familiar with Nighy and his work, you probably know him from this wonderful bit of holiday fluff that explores various aspects of love through ten separate stories that (mostly) all end up interconnecting in some way. He plays washed up aging rock star Billy Mack, who reinvents his career with a cheesey Christmas single. (And is basically the best part of a movie that’s pretty much full of best parts.) Emma Thompson, Colin Firth, Alan Rickman, Hugh Grant, Andrew Lincoln, Martin Freeman, Keira Knightley, Rowan Atkinson and more also star.

Notes on a Scandal. This 2006 psychological thriller stars Oscar winners Dame Judi Dench and Cate Blanchett and is adapted from the 2003 novel of the same name. A veteran high school teacher (Dench) befriends a younger art instructor (Blanchett) and subsequently discovers that she’s having an affair with one of the students. What follows is a lot of blackmail and creepiness and tension, and if you haven’t seen this film, well, I won’t ruin it for you. Nighy plays the husband of Blanchett’s Sheba, who is kind of the queen of poor life decisions.

Notes On A Scandal - Trailer

Page Eight. Nighy stars alongside Michael Gambon, Rachel Weisz and Ralph Fiennes in this 2011 British political thriller. Written by David Hare, Page Eight follows the story of Nighy’s Johnny Worricker, an MI-5 agent who discovers a potentially explosive report that alleges the Prime Minister has details about the US government torturing prisoners in secret overseas prisons. Nighy is quietly compelling as a Cold War-era spy attempting to deal with the moral dilemmas posed by the modern day global intelligence community. Though it doesn’t have a lot of heart, Page Eight will certainly make you think – and the cast it top notch all around.

Pirates of the Caribbean: Dead Man’s Chest/At World’s End. You also probably know Nighy from the blockbuster Pirates of the Caribbean franchise, though you might not know that you do. Nighy acted all his scenes in makeup and a skull cap before getting covered over by CGI effects to play the infamous, tentacle-covered Davy Jones in the Dead Man’s Chest and At World’s End sequels. Yeah, that’s really him.  And he’s pretty awesome.

Shaun of the Dead. While Nighy has actually appeared (in some fashion) in all of Edgar Wright’s Three Flavours Cornetto Trilogy, zombie caper Shaun of the Dead is his largest (and probably most entertaining) role. He plays Phillip, stepfather to Simon Pegg’s Shaun, with whom he has a rocky relationship. As this is a zombie film, you probably shouldn’t be surprised to learn that Nighy (eventually) has a great reaction to getting bitten, and the movie’s pretty great as well.

Shaun Of The Dead Trailer

State of Play. Nighy stars alongside several other familiar British faces in this super compelling conspiracy thriller, including John Simm, James McAvoy, David Morrissey and Kelly Macdonald. Without giving too much away, State of Play tells the story of a newspaper's investigation into the death of a young woman, and centers on the relationship between the leading journalist and his old friend, who is a Member of Parliament and the murdered woman's employer. Twists abound, and it’s a great ride.

This six-part drama served as the inspiration for the 2009 feature film starring Russell Crowe and Ben Affleck (so if it sounds familiar, that is probably why). However, as is the usual case, the British version is the superior of the two (though the film is fairly entertaining).

Underworld.  The very definition of “guilty pleasure,” Underworld is a sci-fi/horror film about an ongoing war between vampires and lycans (also known as werewolves) beneath the streets of the world we know. Nighy plays Victor, one of the ancient Elders of vampire-kind and he has a ridiculously good time camping it up in a variety of dramatic outerwear. Kate Beckinsale, Scott Speeman, Michael Sheen and Sophia Myles also star. (If this sort of ridiculousness is your cup of tea, he also appears in sequel Evolution and prequel Rise of the Lycans.)

Honorable mention: Doctor Who. Nighy puts in a fantastic (and oddly emotional) quick appearance in the Series 5 episode Vincent and the Doctor, in which he plays Dr. Black,  an art expert who loves Vincent Van Gogh and also bow ties. He gets to meet his idol at the end of the episode and it’s a brief appearance all around, but it’s lovely.

Doctor Who: The Doctor and Amy Pond in "Vincent & The Doctor" [Series 5]

What about you all? Obviously some great performances were probably left off this list  - what would you put there instead?