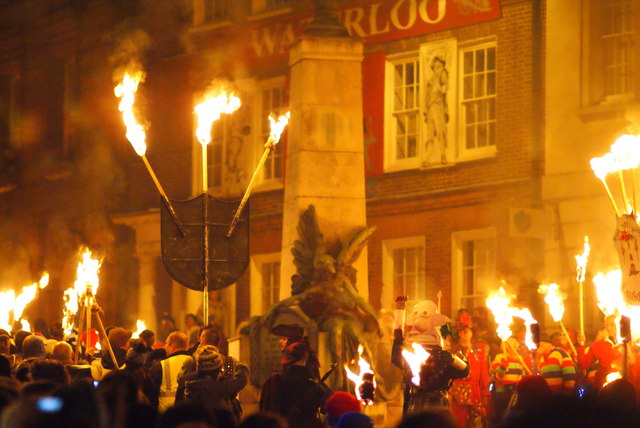 The Gunpower Treason and plot

I know of no reason the Gunpower Treason

Should ever be forgot.

Nowadays many Americans are more likely to be aware of the Remember, remember the fifth of November rhyme from the Wachowski Brothers’ cult hit V for Vendetta  or the flurry of Facebook status updates on the subject in their Newsfeeds once a year, rather than because of actual history, but did you know that there’s an actual British holiday associated with this saying?

November 5 is celebrated in the UK as Guy Fawkes Day, or Bonfire Night, depending on what you want to call it. It involves bonfires and fireworks and general merrymaking, and is a pretty big annual tradition across the pond. Of course, we Americans do not get fireworks to mark this occasion, which seems a real shame when you see how pretty some of the UK celebrations look.

But what’s the big deal about Guy Fawkes? Well, he’s kind of a traitor. And is often burned in effigy as part of Bonfire Night celebrations. It’s kind of a big deal. The British Council’s even made a video about it!

This modern-day event is based on a real historical one, however: On November 5, 1605, a Catholic plotter named (surprise) Guy Fawkes was caught with thirty-six barrels of gunpowder in the cellars of the House of Lords. The “gunpowder plot” was meant to blow the Houses of Parliament sky-high and kill Protestant King James I in order to replace him with a Catholic head of state, and thereby put an end to the Church of England.  Fawkes was arrested, tortured for two days until he confessed (note the grotesque difference in his signature afterward), and sentenced to die a traitor’s death by being drawn and quartered.  At his execution, Fawkes flung himself from the gallows, breaking his own neck and thereby avoiding the even more horrific fate of being cut open while still alive. His remains were quartered and sent to the four corners of the kingdom, as a warning to others.  Ick.

At any rate, in the aftermath of Fawkes’ arrest, bonfires were lit all over London to celebrate the King’s safety, and the tradition of observing November 5 (then known as Gunpowder Treason Day) by lighting bonfires continues to this day. Now there are usually large fireworks displays and community gatherings taking place as well. Effigies of hated public figures often appear on the bonfires – Guy Fawkes himself, or Hitler, or any person who is widely hated by the populace at large (apparently sometimes Simon Cowell figures show up, so it would seem people have wide and varied opinions on X-Factor.) It's closest American parallel is probably July 4th, though obviously the reasons behind both holidays are very different!

But still - sounds kind of fun, right? Do you wish we could celebrate something like Bonfire Night here in America?