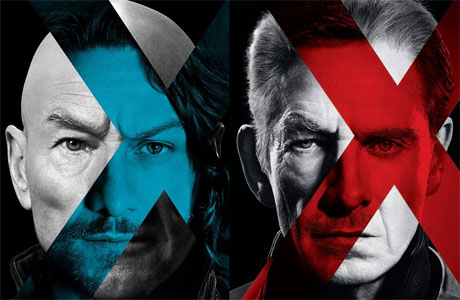 Casting buckets of British actors in your upcoming blockbuster film certainly seems to be the thing to do nowadays – The Hobbit’s bursting with Brits, and the recent Star Trek sequel had more than its fair share. And, of course, that’s not counting the art house-style films that are always packed with accent-ridden thespians, like 12 Years a Slave, Philomena or Great Expectations. Adding a bit of Britishness to your upcoming feature film certainly seems to be a popular choice amongst casting directors and producers – which means it’s basically a great time to be an anglophile who happens to live near a multiplex.

And this trend doesn’t seem to be slowing down any time soon. One of Summer 2014’s most-anticipated films is the sequel to X-Men: First Class, a film which was, in itself, a prequel to the super successful X-Men trilogy from the early 2000s. Yeah, it’s a bit timey wimey if you think about it too hard. Anyway, called Days of Future Past, this prequel sequel looks set to give us an amazingly good time – and will blend together the best parts of all the films, including two sets of Charles Xaviers and Erik Lehnsherrs (that’s Professor X and Magneto to y’all that don’t follow comics much), who are all British in real life.

That’s a lot to say that the first trailer for X-Men: Days of Future Past is here, and it’s kind of awesome.

But, did you really doubt? How could anything that gives us Sir Patrick Stewart, Sir Ian McKellen, James McAvoy and Michael Fassbender all together be bad?

The plot, which Bryan Singer – making his triumphant return to the X-Men director’s chair - says is going to fix all those horrible bits you’ve blocked out of your mind from X3: The Last Stand, seems to involve Professor X and Magneto somehow sending Wolverine back to do some inexplicable timey wimey stuff with their younger selves to alter some kind of pending calamity. But, really, once you watch the trailer, you won’t care if all these awesome people read the phone book for two hours as long as you get to see this film as soon as possible.

As you can see, a ton of familiar faces from both X-Men film series are set to return for this film besides Stewart, McKellen, Fassbender and McAvoy – including Hugh Jackman, Halle Berry, Anna Paquin, Jennifer Lawrence, Shawn Ashmore, Nicholas Hoult, Ellen Page and more.