The first image has been released from upcoming BBC Two drama Legacy – which boasts a trio of recognizable British stars as its leads. The Cold War thriller stars Boardwalk Empire’s Charlie Cox, Sherlock’s Andrew Scott and The Hour’s Romola Garai (who recently showed up on our British Actresses You Should Know list).

The three are also joined by Simon Russell Beale – who recently won a BAFTA for his performance as Falstaff in The Hollow Crown - Olivia Grant, Christian McKay and Tessa Peake Jones.

Check out the first promotional image below – and tell us what you think is more dramatic – Scott’s mustache or the collar on his jacket? (Amazing!) 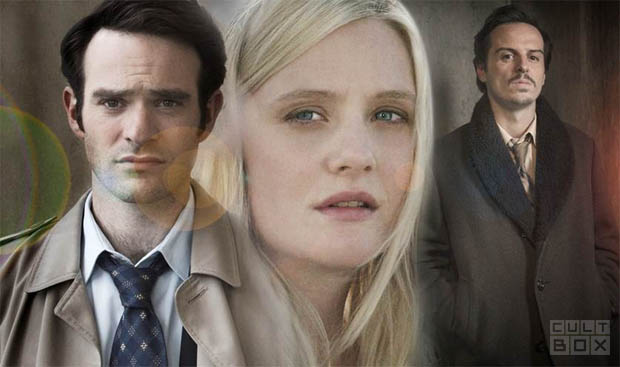 Based on the novel by Alan Judd, Legacy is written by Paula Milne, who also penned the recent The Politician’s Husband with David Tennant. The drama tells the tale of a British spy named Charles Thoroughgood, who, at the height of the Cold War in 1970s London, discovers some rather unsettling information about his father’s complex past.  .

Milne describes Legacy as more than just a British spy thriller, claiming that it has "an extraordinary personal twist" because of the family relationships involved in the story.

Mostly, it’s just very exciting to see Andrew Scott busily doing television work again. With his character the recipient of an untimely self-inflicted bullet to the head on Sherlock, it seems unlikely we’ll be seeing much of the infamous Moriarty in that drama’s upcoming season. And he’s too good an actor to waste. (Plus, it’s nice to see Garai doing something new now that The Hour is no longer with us. Not that we’re still bitter. Much.)

Sound interesting? We’ll share more news on Legacy as we have it.