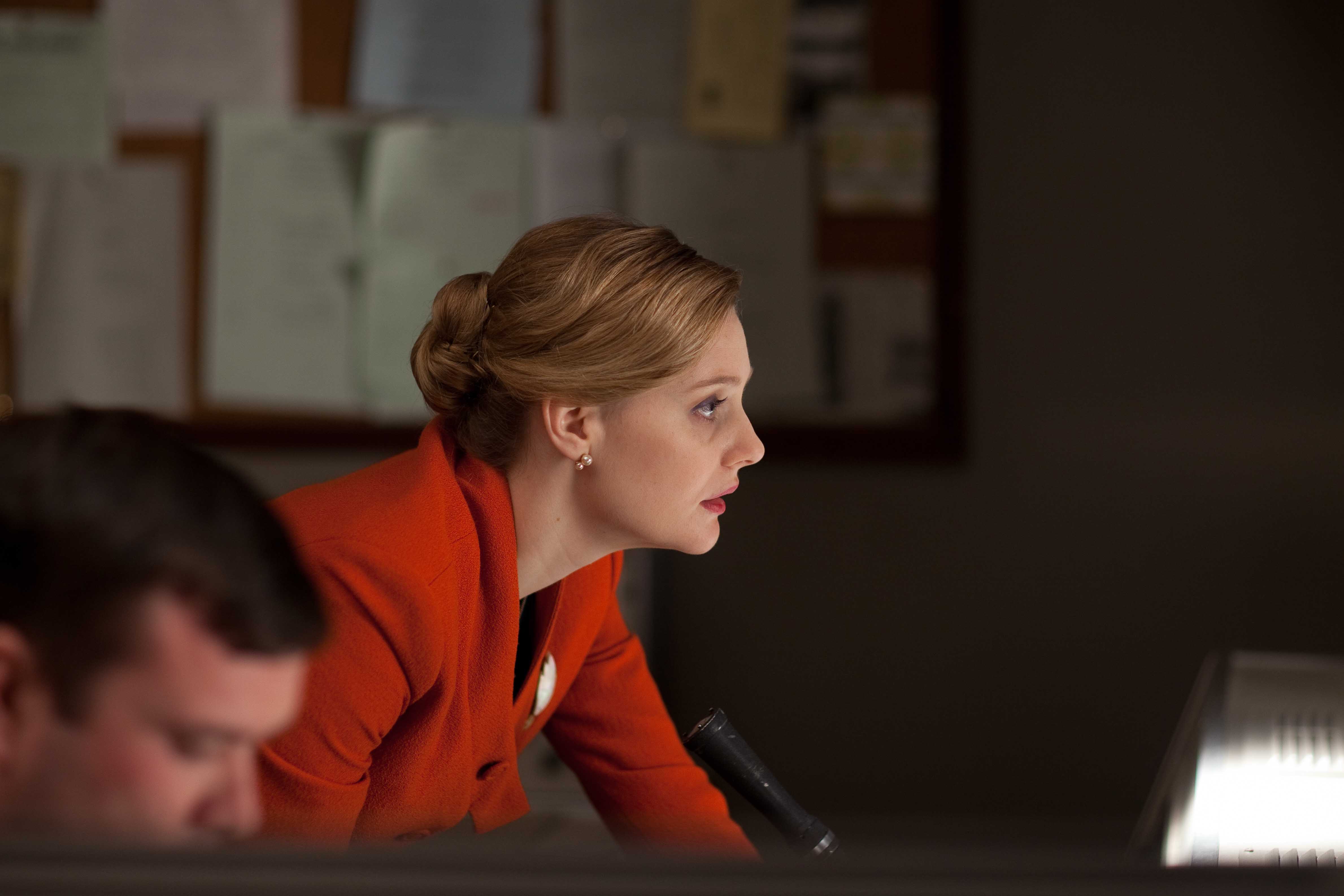 Garai as Bel in BBC America's "The Hour" (Photo: Photo Credit: © Laurence Cendrowicz / Kudos)
Thought it might be time to spotlight another woman during our British Actors and Actresses You Should Know series, so here’s a look at a one of the most interesting up and coming ladies in the field, Romola Garai. You’ve probably seen here in something, whether it was her star turn in news drama The Hour, her role in Best Picture-nominated film Atonement or her dance moves in sequel Dirty Dancing: Havana Nights. (It’s also possible you heard about her speech at the 2013 BAFTA Awards, which got really personal, really quick about the recent birth of her child and made more than a few headlines.)

But, regardless of how much or how little you know about this actress, her career to date is so varied that it’s likely you’ve missed a few of her projects along the way. Here’s a look at some of them – and why they’re worth your time.

Atonement. Adapted from the Ian McEwan novel of the same name, the film tells the story of a star-crossed relationship, a great lie, and lives forever changed. (It’s hard to get super specific without spoiling it for you.)  Garai stars opposite James McAvoy and Keira Knightley (with a bonus appearance by Sherlock star Benedict Cumberbatch) as the adult version of the child Briony Tallis, who tells the great lie that reverberates through her life for the next sixty years.

Babysitting. This eighteen minute short film also stars Downton Abbey heartthrob Dan Stevens. Garai plays Maggie, a young woman who is asked to babysit for her boss’s wife. The incident forever alters her outlook on life, as well as an old relationship. This is a bit weird, but fairly adorable, and Garai and Stevens have lovely chemistry together.

The Crimson Petal and the White. This four-part miniseries is an adaptation of Michael Faber’s bestselling novel of the same name. This series follows the story of Sugar, an intelligent and alluring young Victorian prostitute who dreams of a better life for herself. She thinks she has found her way out of the slums when she secures the patronage of a successful businessman named William Rackham, but things are not entirely as they seem. Garai was nominated for Best Actress at the 2012 BAFTA Television Awards for her performance as Sugar. Chris O’Dowd, Amanda Hale and Shirley Henderson also star (and keep an eye out for an almost unrecognizable appearance by Gillian Anderson).

The Crimson Petal and the White trailer

Daniel Deronda. This 20020adaptation of George Eliot’s novel stars Hannibal’s Hugh Dancy as Daniel Deronda, Garai as Gwendolen Harleth, Downton Abbey’s Hugh Bonneville as Henleigh Grandcourt, Greta Scacchi as Lydia Glasher and Jodhi May as Mirah Lapidoth. The story encompasses two distinct social worlds – the privileged country gentry and the destitute urban Jews – and is wonderfully complicated and fascinating. Trying to adapt a 700 page novel for the screen is always a challenge, but this production generally succeeds. (And since there doesn’t appear to be a real trailer for this online anymore, have one of Garai’s most awkward scenes instead – though it probably does require a tremendous amount of skill to be able to sing this badly on purpose…)

Dirty Dancing Havana Nights. This 2004 film isn’t so much a sequel to classic Dirty Dancing, as it is a re-imagining, taking the same basic story and transplanting it from New York to Cuba on the eve of the Cuban Revolution. Garai plays Katey Miller, the equivalent of Jennifer Grey’s Baby Houseman, who falls for a handsome Cuban waiter played by Diego Luna. He teaches her to dance and partners with her for an upcoming contest. Fidel Castro’s rise to power forces Katey’s family to depart, putting their relationship in jeopardy. You know how it goes. Silly, but mildly fun.

Great Performances: King Lear. Sir Ian McKellen, who was nominated for a 2009 Emmy for his performance as William Shakespeare’s tragic king, stars in this television recreation of a Royal Shakespeare Company stage production. Garai plays Lear’s youngest daughter Cordelia and her interpretation of the character is interestingly modern/feminist. The sets and staging of this Lear are fairly minimalist, but this only serves to highlight the fantastic acting from the whole cast, as well as the power of Shakespeare’s words. (Bonus: Doctor Who’s former Seventh Doctor Sylvester McCoy plays the Fool!)

You can actually watch the entirety of King Lear online for free from the Great Performances website by clicking here. McKellen’s performance is stunning.

The Hour. This drama depicts the launch of a new current-affairs show in June 1956 at the time of the Hungarian Revolution and Suez Canal crisis. Garai stars alongside Dominic West and Ben Whishaw as the trio of journalists who make the show possible. She plays Bel Rowley, the producer of the weekly newsmagazine series The Hour, who shares an ill-advised affair with West’s Hector and a confusing relationship with Whishaw’s Freddie. Her character is a wonderfully interesting look at the experiences of women in the workplace during the 1950s and while the complicated Bel is occasionally a bit abrasive, the character is wonderfully complex.  Sadly, the series was abruptly cancelled after its second season – ultimately ending on a truly awful cliffhanger, to boot. (Yes, this fact still stings.) Garai was nominated for a Golden Globe for Best Actress in a Mini-Series for her performance in The Hour.

What about you all? Are you very familiar with Garai? Enjoy any of her performances in particular?