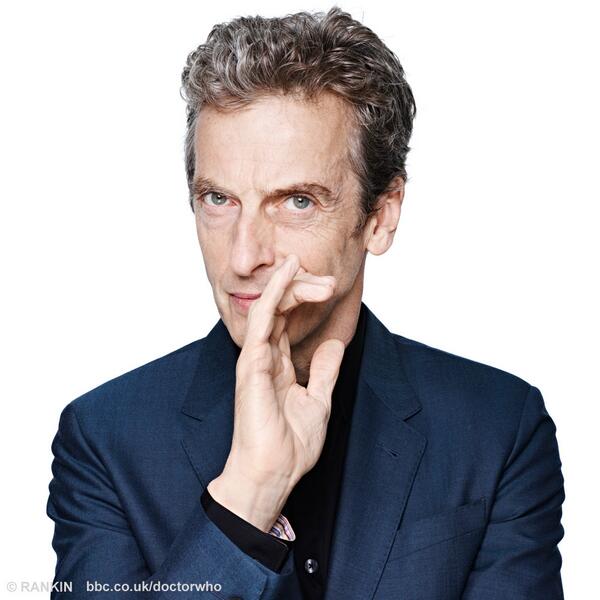 The new Twelve: Peter Capaldi. (Photo via official Doctor Who Twitter)
The identity of the new Twelfth Doctor was announced today in a rather unprecedented BBC One live program – which was simulcast here in the States on BBC America.  After about twenty-five minutes of interviews from Doctor Who alumni past and present – including Peter Davison, Bernard Cribbins, Jenna Coleman, Janet Fielding, headwriter Steven Moffat and more – during which the BBC drove us all absolutely crazy with tension and teasing and waiting, the official announcement of the new Doctor was made.

The Twelfth Doctor will be played by well-known British character actor Peter Capaldi.  You may have seen him as Malcolm Tucker in The Thick of It, in his turn on as the new Head of News during The Hour’s second series, or as the villainous John Frobisher in Torchwood’s Children of Earth miniseries. He’s a fantastic actor – and an exceptionally exciting choice to play Twelve. (Though I’ll be honest, I was kind of secretly hoping for a Time Lady – or Ben Whishaw. But I am overall happy with this pick.)

It’s also so lovely to see the show choose to go with a slightly older actor this time around – nothing against outgoing Time Lord Matt Smith, of course, but it should be interesting to watch a version of the Doctor who possesses a bit more gravitas after the past few incarnations. Capaldi is 55, the same age as First Doctor William Hartnell when he originally stepped into the TARDIS.  How’s that for some nice symmetry in the 50th anniversary year?

What are your thoughts on the choice of Capaldi to play the new Doctor? Pleased? Surprised? Annoyed? We’d love to know.