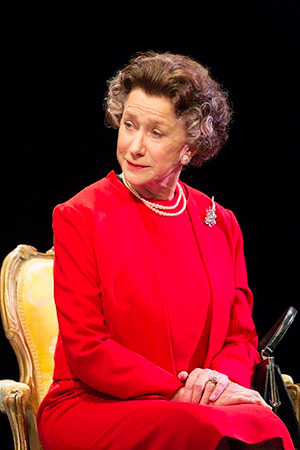 Helen Mirren in The Audience (Photo by Johan Persson).
Dame Helen Mirren is famous for many things, but most people (especially in America) probably know her best from her Academy Award-winning turn as Queen Elizabeth II in the 2006 film The Queen.  So it probably shouldn’t surprise anyone that when Mirren took up the crown again. reprising her role as the British monarch for a new West End production called The Audience, tickets sold out pretty quickly.

Written by British playwright Peter Morgan – who also wrote the script for The Queen – The Audience centers on the weekly meetings (audiences) given by Queen Elizabeth to her prime ministers, from her accession in 1952 to the present day. These audiences are private and strictly confidential, and the play imagines what those conversations might have been like. Since the Queen has had twelve Prime Ministers thus far during her reign – there are certainly plenty of stories to go around. From Winston Churchill to David Cameron, each Prime Minister has used these meetings differently, and while politicians come and go through the revolving door of electoral politics, the Queen remains constant. Mirren won Best Actress at the 2013 Olivier Awards for her performance in this role, which requires her to play Queen Elizabeth both as a fresh-faced twenty-something monarch new come to the throne, an octogenarian with six decades of experience under her belt, and everything in between.

National Theatre Live will be broadcasting the June 13 performance of The Audience live to various cinemas around the world. Many American theaters – who tend not to show the live broadcasts the day they air – are offering encore presentations at various dates in June and July.

Watch a trailer for the production below.

You can find your nearest theater that participates in NT Live here. For us DC folks, The Audience will be shown at the Shakespeare Theatre’s Sidney Harman Hall on Monday, July 22 and Saturday, July 27.

I was lucky enough to grab ₤10 day tickets to see this production when I was in London last month – and I can’t recommend it highly enough. It’s surprisingly funny, the costume changes that accompany a switch between time periods are clever and Mirren’s performance is as fantastic as you’d expect. Plus, there are actual corgis! It’s absolutely worth seeing if you can find the time to fit in a screening. (If there’s interest, I’m not averse to organizing a local meetup one night – do tell!)