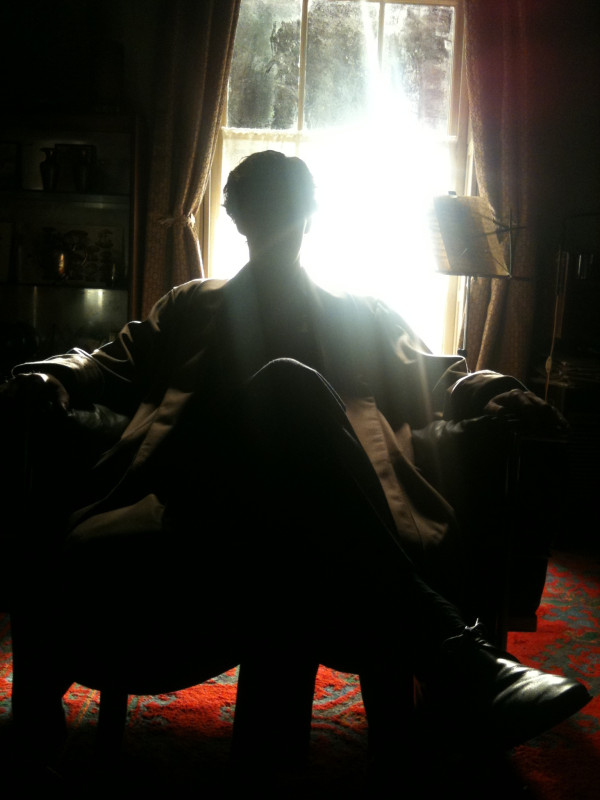 Benedict Cumberbatch on the Sherlock set, courtesy of Mark Gatiss' Twitter feed
Well, it’s official: Filming on the second episode of the highly anticipated third series of Sherlock wrapped this week, according to co-creator Mark Gatiss. Good news: We’re two-thirds of the way to done! Bad news: Production is about to take a two month hiatus to accommodate the busy schedules of leads Benedict Cumberbatch and Martin Freeman, who have a bunch of movies to make. They’ll reconvene to shoot Episode 3 – whatever it’s going to be called – later this summer. Welcome back to the waiting game, gang!

Gatiss also took to Twitter to clarify that all the rumors surrounding a potential airdate for Series 3 are just that – rumors. “Incidentally, anything online about transmission dates etc is entirely bogus. Nothing will be decided for months yet,” he wrote.  (Oh, and he also shared that rather artistic – and teasingly lit – photo of Cumberbatch you see to your right.)

So, there we have it – official confirmation that none of the wild speculation – and sometime outright declaration – that Series 3 would premiere in whatever XX timeframe are all false. The internet has been abuzz with constant chatter on this topic ever since filming started, since pretty much everyone is dying to see the world’s only consulting detective back on our screens as soon as possible. There have been supposedly confirmed reports touting UK airdates in August, September, and November making the rounds for months, even though none of these claims were sourced from anyone who might actually know something about the situation.

But, when might we actually expect to see the third series actually air? Of course, the answer is that this depends. Putting our best deductive earhats hats on, let us consider the facts.

It takes them roughly a month to shoot an episode, give or take a bit, so that puts us at a full wrap on Series 3 around late August or the beginning of September. Even assuming that post-production work continues on The Empty Hearse and The Sign of Three during the hiatus – which seems likely – that’s still a good three or four weeks before the same work could be completed on the third episode. However, since that episode will be the last to screen, it is possible that workarounds could be put into place that would allow a Fall transmission, if everyone was super motivated to do so.

This seems extremely unlikely for a couple reasons. First, producer Sue Vertue herself has said September is not happening. The other issue with a Fall airdate concerns a manor house-sized elephant in the room named Downton Abbey. ITV is slated to screen the fourth series of its mega-hit costume drama this Fall – and if past is prologue it should air through September and October. Downton is such a ratings monster that it seems unlikely that the BBC would be willing to put critical darling Sherlock – which is also a ratings success in its own right – up against those odds. The prospect of November also has its own set of problems, mostly centered on the fact that there will inevitably be a slate of programming – not to mention the actual episode itself – surrounding the Doctor Who 50th anniversary that will probably be in the way. This puts us in December by this point, which runs in the path of holiday programming, so while this could feasibly happen, it’s also possible we’re looking at a repeat of Series 2 all over again, with a New Year’s Day premiere. Great Hiatus indeed.

Of course, this is all so much speculation as well, well-intentioned thought it is, so who knows. It’s my personal best guess, so feel free to argue with me. (Convince me the wait will be shorter! Please!)

At the BAFTA Awards a couple of weeks ago, Freeman did an interview on the red carpet where he says that Series 3 should screen in December or January. This statement jives with a claim made by Cumberbatch way back in March that he thought the series would air in the winter, probably around Christmas. So, maybe this is one of those mystery plots where the answer’s actually been in front of us the whole time and we just refused to accept it. Because it’s really far away. Sigh.

And what of us American viewers? Well, sadly, there’s little news on that front and to be quite honest about it, a lot probably hinges on when the series screens across the pond. Cumberbatch himself – as well everyone behind the scenes – is quite keen to shorten the gap between UK and US transmission, which is always lovely to hear, but there are so many other factors at work (including the looming US broadcast of Downton Abbey in January) that it’s impossible to know for sure what might happen. Best to hope for the best, but prepare for a wait is my advice, though hopefully the wait for US fans will be as short as possible. Fingers crossed.