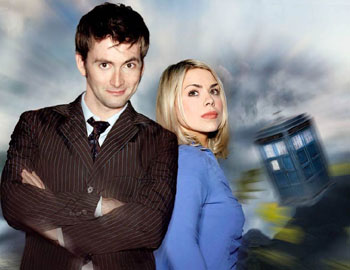 You probably don’t need to read this blog post, given the fact that it’s likely you have already seen the massive online celebration or heard my tremendously loud shrieks of joy, but just in case, here we go. It’s officially official – we’ve got our first bit of absolutely true and confirmed news regarding the upcoming Doctor Who 50th anniversary and it couldn’t be more exciting for Whovians everywhere.

The BBC announced over the weekend that Tenth Doctor David Tennant and former companion Billie Piper are both set to join current stars Matt Smith and Jenna-Louise Coleman for the celebrations surrounding the show’s fiftieth year on the air.  Tennant played the Doctor for three full seasons and several specials, and was last seen on the show in early 2010. Piper was the original companion when Doctor Who returned to televisions for its 2005 reboot and starred alongside both Tennant and Ninth Doctor Christopher Eccleston for two series.  To say I am over the moon with joy about this news is possibly the understatement of the year. (The only thing that could possibly make me happier is an announcement that Eccleston is also returning, but I’m trying not to get my hopes up about that.)

Filming on the 50th anniversary special begins in the UK this week and thus far no one has any idea what the episode will look like, beyond the fact that Smith has called the story “epic” and “the biggest event in the history of the show”.  My personal pet theory is that this will be Rose and the Series 4 metacrisis version of Ten (or 10.5 if you’re counting) rather than the Doctor actually meeting up with a previous incarnation of himself, but then again that could just be me projecting. But, it’s an easy solution to the inevitable paradox problems and interesting to boot. But, obviously, we’ll have to wait and see. And to be honest, I’m so happy at the prospect of seeing Rose again that I can’t bother with being anxious over the how of exactly how all these characters are going to fit together into the same episode.

Still – what’s possibly the most exciting realization to come out of this is the idea that we could still see anyone from Who history show up for the 50th anniversary now. Piper had previously denied any involvement in the anniversary special, but obviously that wasn’t strictly true, now was it? Therefore, it’s totally okay that you still have a tiny piece of your heart that’s holding out hope that your particular Doctor or an especially beloved secondary character might pop back up again out of the blue. Because they could.

What do you think? Are you excited at the thought of seeing Tennant and Piper again? Who else would you like to see pop back up for Doctor Who’s 50th?