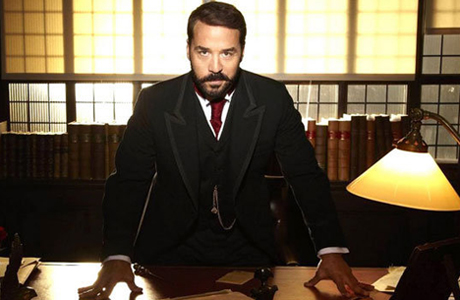 While the Masterpiece premiere of new period drama Mr. Selfridge doesn’t happen until this Sunday here in the US, there’s already some good news for interested fans about the future of the show. ITV has already renewed the costume drama for a second series, as a result of its consistently high ratings (averaging somewhere around 8 million viewers) across the pond. The UK network also said that Mr. Selfridge has been the channel’s most watched new drama since detective series Scott & Bailey premiered in 2011. Woo and hoo.  (Apparently this information  was announced a couple of weeks ago – did I miss it while I had the flu? Who knows? It’s still good news!)

Star Jeremy Piven will return as flamboyant entrepreneur Harry Gordon Selfridge, and most of the drama’s main cast, including Zoe Tapper, Amanda Abbington, Samuel West and Frances O’Connor, are all slated to be back. ITV bosses have also hinted that more new faces will join the current players as the drama surrounding the famous Oxford Street department store and the lives of the people who work there continues to unfold.

Writer Andrew Davies will also be back to pen Series 2, and will be joined by two additional lead writers, Kate Brooke and Kate O’Riordan. The drama’s second series will also consist of ten episodes – the same as Series 1 – and the story will be set in 1914 amid the onset of the first world war. Filming is scheduled to begin later this Spring, with an eye to a 2014 airing in time to mark the centenary of the start of World War I.

Are you looking forward to checking out Mr. Selfridge when it premieres on Masterpiece this weekend? Personally, I find the knowledge that the show has already been renewed makes me feel even better about tuning in on Sunday – there’s nothing worse than getting into something only to have it disappear on you.