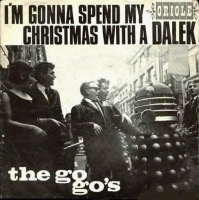 Yes, this is a real thing. It’s a bit hard to believe – and yet, it’s pretty awesome that it even exists, because it's possibly the kitschiest piece of music ever made. (It's almost up there with the whole Leonard Nimoy "Ballad of Bilbo Baggins" thing, if you ask me. Though it lacks the star power.)

In 1964, a band from Newcastle called The Go-Go’s – most definitely not the same group as the American all-girl band famous for hits like Vacation and We Got the Beat – recorded one song. This song was a Christmas ditty meant to capitalize on the popularity of Doctor Who’s now infamous enemy, the Daleks, who were apparently quite the thing at that time. (Remember, the show had only premiered the year before!)

I’m Gonna Spend My Christmas with a Dalek is completely silly, and not even a particularly good song, but the lyrics are hilarious, complete with a representation of Daleks that is off base enough to make one wonder if any of the band members ever actually watched Doctor Who.  Take a listen for yourself!

I'm Gonna Spend My Christmas With A Dalek - The Go Go's

In other surprises of the “Yes, This Actually Exists” variety, there was even a documentary made about fact that the UK was completely obsessed with all-things-Dalek in the 60s. It was called Dalekmania (which is something that obviously I need to see in my life immediately, but that’s a whole ‘nother post). This is also how people apparently refer to the nation’s Dalek craze at that time. Dalekmania. It was a thing. Wow.