I had the best time at Comic Con – largely because it was so awesome to be surrounded by so many devoted fans of shows like Doctor Who and other things that are awesome. I spend the most time at the Con doing Whovian-related things, so that’s the first story I’ll tell you guys – but keep an eye out for an early review of CBS’ Elementary, my favorite outfits I saw at SDCC, and some general flailing about getting to see a bit of Peter Jackson’s The Hobbit. (Spoiler: Incredible).

To the surprise of no one, I imagine, Doctor Who is one of the most popular series at Comic Con, year in and year out – whether it’s an official panel, a screening or just fans dressing up as their favorite characters, you’ll see the Doctor everywhere in San Diego. This year was no exception, with several exciting events taking place over the course of the long weekend. I went to two separate Who panels featuring various cast and production team members, saw countless Elevens on the exhibit floor, and even ran into a Dalek or two. It was awesome.

Click through for a recap of all the exciting Whovian activities at SDCC, including video clips and highlights from both cast panels. (Seriously, can we have Series 7 now?)

Since I was lucky enough to attend two separate Doctor Who events, I’ll break them out for your reading enjoyment below.

Doctor Who Nerd HQ Panel Raises Over $5,000 for Operation Smile, Is Both Touching and Hilarious. 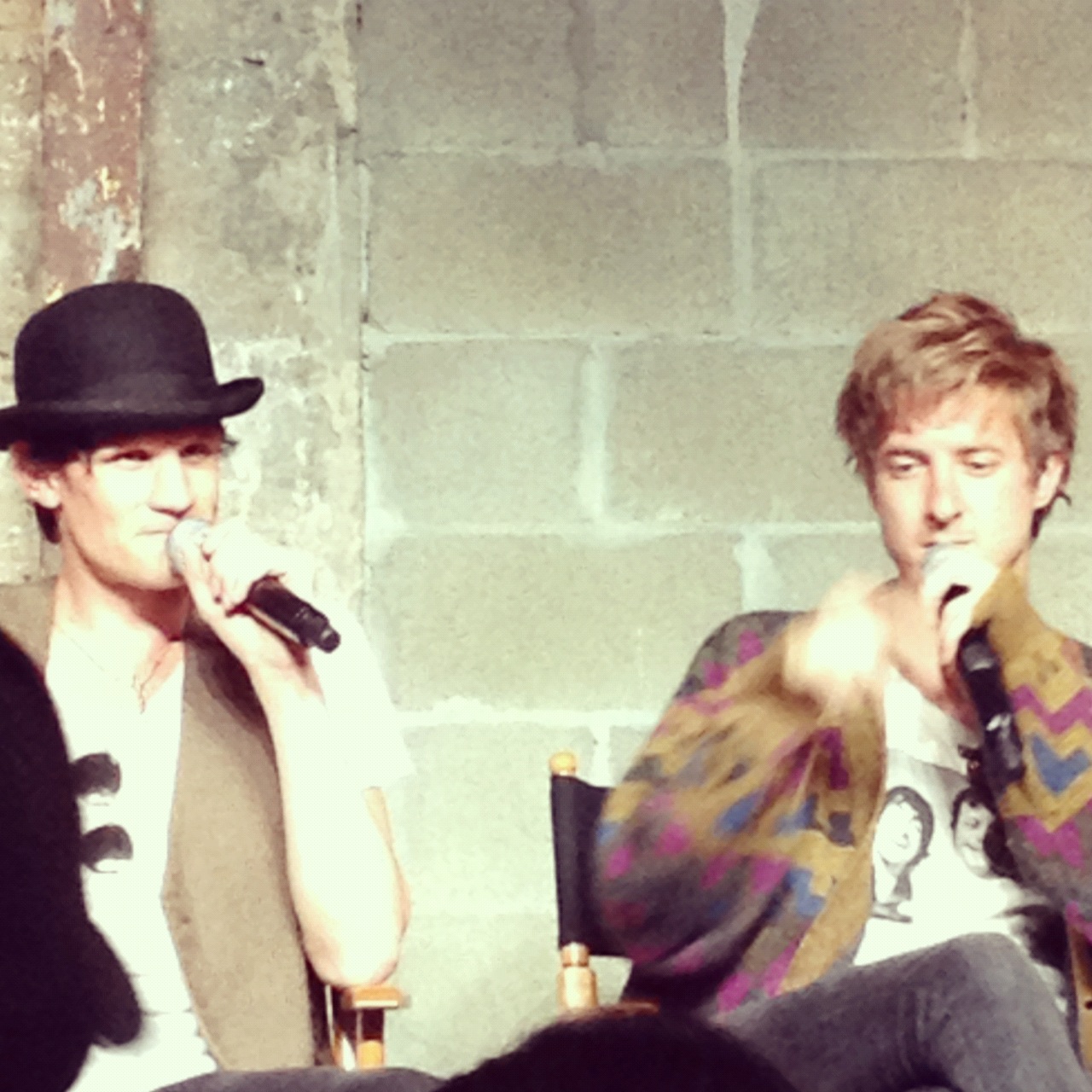 Probably the best event I attended at Comic Con was the small panel put on by the awesome folks at Nerd HQ. For those who are unaware, Nerd HQ is an offsite event (meaning that it happens outside the convention center activities) put on by Zach Levi – of Chuck fame – that puts on “Conversations with a Cause” during Comic Con.  These are small panel discussions with the goal of creating intimate, memorable fan experiences and raising money for a good cause at the same time. Proceeds from ticket sales – and a seat at these mini-panels was only $20 a pop – all went to Operation Smile, a great charity that helps provide free surgeries to children around the world with cleft palates or other facial deformities.

There were only about 200 people allowed in to this panel – with maybe another 30 or so given standing room only spots – which made the entire thing feel very small and cozy and like an actual big group conversation. Stars Matt Smith, Karen Gillan and Arthur Darvill just sat down on the stage and chatted with us all for a bit about their experiences filming the show, their friendship, their ideal Doctor Who settings, and a lot more. There was even some singing!

The Nerd HQ panel was livestreamed as it happened, so you can watch it in full, glorious HD for yourselves, and not just rely on my scribbled notes and jetlagged memory. It’s a fantastic Q&A – in some ways actually better than the Hall H panel that occurred later on Sunday, in terms of actual content – and well worth a watch if you’re a fan. Highlights (and trust me, there’s loads more than this!) include:

Nothing is Cuter Than the Doctor and Kids. One of the first questions came from Sydney, a tremendously cute six-year-old girl who wanted to know if “the Doctor” (Matt) was afraid of the Weeping Angels. His response is so perfect – and so suddenly really in character as the Doctor – it’s a bit amazing all of us in the audience didn’t pass out from how cute this entire exchange happens to be.

Best Friends Forever. This interview will actually make you quite sad that Arthur and Karen are departing the TARDIS during Series 7 – no matter what your feelings on Amy and Rory might be – simply because it’s so clear that they are all genuine friends in addition to people who work together. There are several adorable moments where they discuss their time together on set and their relationship, which they describe as being like “siblings.” This includes awesome demonstrations of some of the random things they do on set – including a game called “The Gap,” Arthur’s “Lunge” and more. Their very real friendship is so sweet to watch, even when the three of them are talking about nothing at all of any consequence. They finish each other’s sentences in places, frequently interrupt and answer questions for each other, and just, it’s all very adorable.

Dressing Up for Comic Con. One of the most famous bits of Comic Con is that there are so many people that dress up as their favorite characters from comics, movies, television shows, whatever. After being polled, Karen said she’d be a Klingon, Arthur went with Jabba the Hut and Matt said either Batman or the Joker, with an outside possibility of the Penguin. (I suppose we can’t expect them to dress up as Who characters ALL the time?) 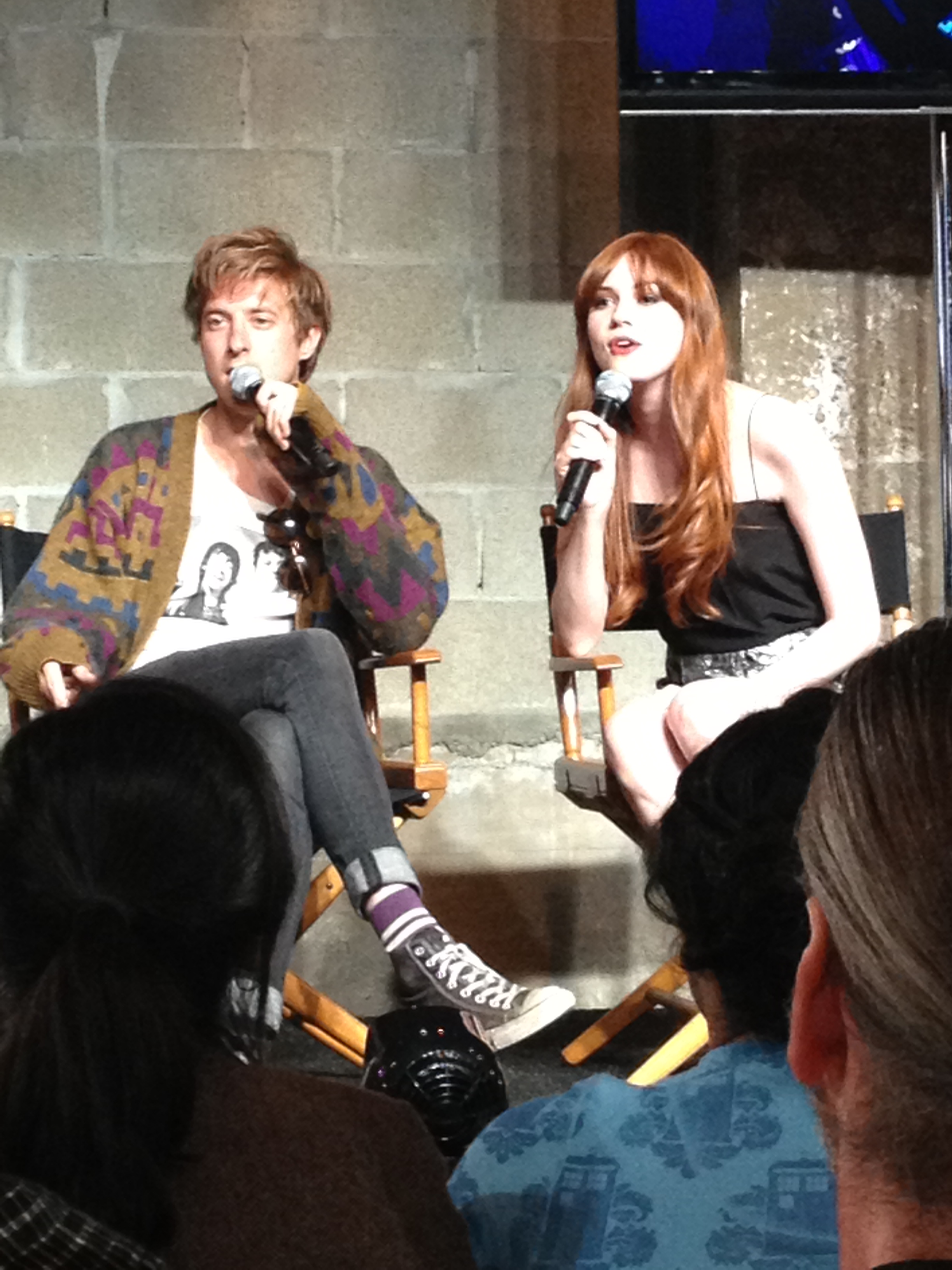 Vocabulary Lessons. The cast debates the plural of TARDIS, after a group of ladies in TARDIS dresses asks. Group consensus was that plural would also be “TARDIS” as it would technically “Time and Relative Dimension in Spaces”.

Series 7 Details. Matt, Karen and Arthur have clearly been to the Steven Moffat School of Withholding Information, because while multiple people asked about various details of the new season – including River’s role and how Amy and Rory will be leaving, they basically gave us nothing, beyond some adorable personal anecdotes (such as their trip to Sea World while in San Diego) that had nothing to do with the show.  The three of them talked for nearly an hour, yet I don’t think we actually learned anything we didn’t already know.  A gentleman asked about the possibility of a multi-Doctor episode in the new series, to which Matt responded that it would be amazing to see former Doctors David Tennant and Christopher Eccleston again, but that that would probably be quite difficult to make happen. Literally, that’s the closest thing we got to a legit spoiler the whole time!

Doctor Who Crossovers the Cast Would Like to See. I love the idea of inserting the Doctor into other universes/series. Karen said she’d pick Mad Men, mostly because she’d like to meet Jon Hamm. (Matt says that the Doctor would find the residents of Sterling Cooper Draper Pryce boring.) Arthur’s pick was Sesame Street (which, personally, I think is the best idea ever!). Matt said he thinks the Doctor would find the Breaking Bad boys interesting. An audience member then shouted out Sherlock as a suggestion, though Matt then said that he thought that both Sherlock and the Doctor would find the other ridiculous. (I’d still like to see it though, just saying.)

Karen and the Babes Perform.  If you watch nothing else from the panel video linked here, please fast forward to 37:56 or so, and watch Matt, Karen and Arthur sing Queen’s Bohemian Rhapsody along with the crowd. It’s that awesome. (And the backstory/running joke about the “Karen and the Babes” thing – apparently if she weren’t an actress, Karen might be in a girl band according to Matt – is also hilarious.)

This event basically made my Comic Con, so you know, since you can watch the whole thing for yourself, you should!

Then Doctor Who Packs Hall H On Sunday 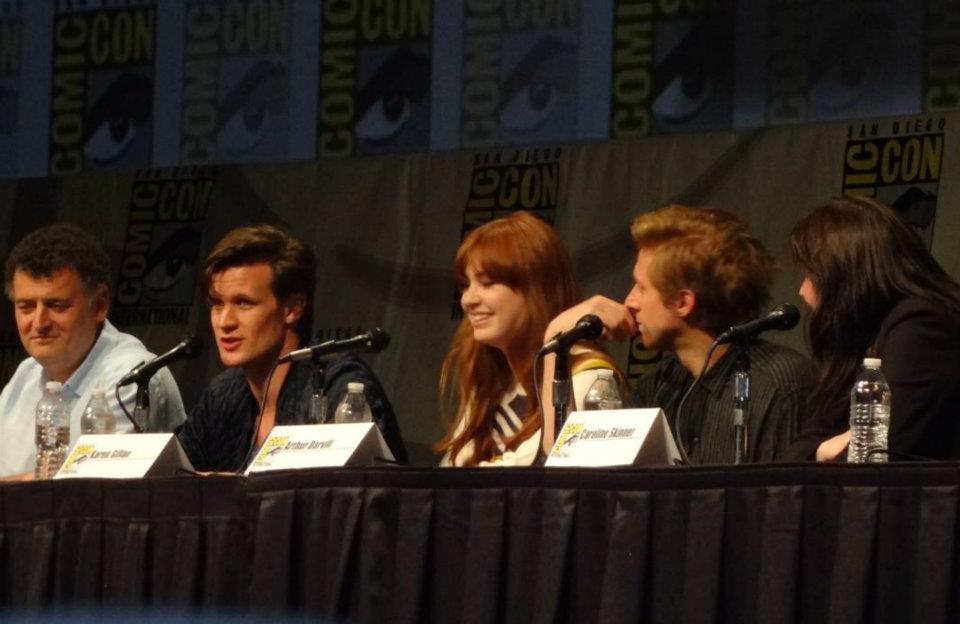 Sadly, I did not have nearly as amazing seats for the official SDCC Doctor Who panel on Sunday, for two reasons. One, this room was muuuuch bigger – Hall H seats about 6,500 people and the line started forming for this panel the night before. I actually got in line quite early (around 4:30am for a panel that went on at 12:30), but there were loads of people already in front of me!

The devotion of Whovians is incredible, and oddly the best part of going to the Who panel at Comic Con isn’t even the actual event, but the experience of being there with so many other people who love the show.  I’ve never seen so many sonic screwdrivers in one place!

The panel featured Matt Smith, Karen Gillan and Arthur Darvill once more, joined by head writer/executive producer Steven Moffat and executive producer Caroline Skinner. They were asked a barrage of questions from moderator Chris Hardwick (of The Nerdist), along with several from audience members, including a Dalek, a TARDIS, a child in a Dalek dress and a few regular (or at least uncostumed!) fans.

To get us all in the proper mood of emotional devastation to talk about the Ponds’ exit from the show, the audience was shown a very emotional scene from Series 6 episode The Girl Who Waited where Rory had to choose which Amy he would be able to save (alternate timelines strike again!). Then, once basically everyone was crying, it was time for the cast and crew to talk about how hard it was to see Karen and Arthur leave,  how emotional their last days on set were, and how their exit is “genuinely, properly sad.” 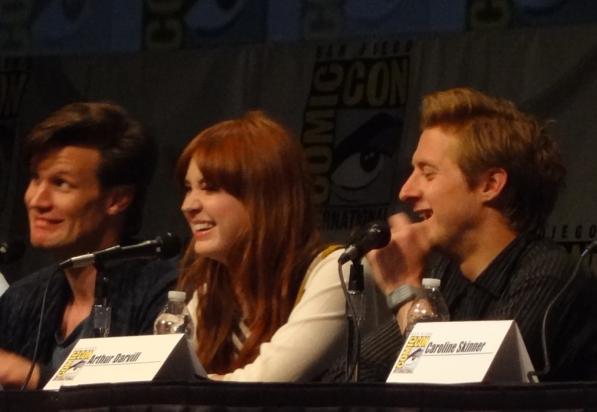 This discussion was also full of very sweet personal moments – we learned that the cast regularly “nicks bits of TARDIS” from the set, that Matt’s weirdest fan encounter was when a woman told him he was an exact replica of her pet hedgehog and that the cast regularly liked to creep out guest actors by repeatedly invading their personal space. Everyone was charming and awesome, once again.

However, this time we did manage to get a few more tidbits about the new series out of this panel, and even saw two clips from the new episodes!

Alas, the full panel does not appear to be available online, but you can seem some of the highlights and a bit of behind-the-scenes stuff courtesy of this video from BBC America.

Rumor has it that Doctor Who returns  this August, but that’s yet to be officially confirmed. From the looks of things, it’s going to be a great season!