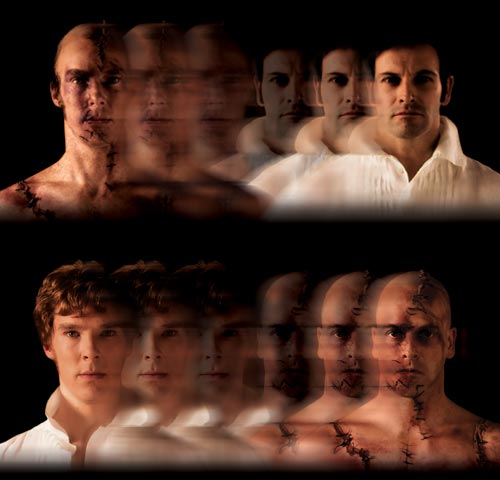 Due to popular demand, director Danny Boyle’s award-winning 2011 production of Frankenstein will return to cinemas worldwide this summer as part of this year’s National Theatre Live program. The play features Sherlock star Benedict Cumberbatch opposite Jonny Lee Miller (recently tapped to play the lead in CBS’ unfortunate upcoming Holmes adaptation), with the two actors alternating between the roles of the Creature and Victor Frankenstein during every other performance. The pair recently became the first in history to share the Best Actor prize at the London Evening Standard Theatre Awards for their work in this production.

As you’ll see in the new trailer – which incorporates actual footage from the show – the play does a tremendous job using creative visuals to tell the story of Dr. Frankenstein and the monster he creates. If you missed out on seeing this production onstage or when it screened in cinemas last year, I cannot encourage all of you strongly enough to catch it this time around. It’s fantastic. (Personally, I’m partial to the Miller as Frankenstein/Cumberbatch as the Creature set-up, but both versions are brilliant.) Click through to take a look for yourself, and see how to find out screening information near you!

Screening dates or cities are officially listed as “from June” and “worldwide” on the NTLive website. However, by doing some Sherlockian-style internet sleuthing (not really), you’ll find that both versions of Frankenstein will be screening in the Washington, DC area this August at the Shakespeare Theatre’s Sidney Harman Hall.  Give me a shout if you’re planning to go as we get nearer the date, I will most certainly not be camped out outside probably be attending them both!