Earlier this week, filming for Doctor Who Series 7 officially kicked off in Cardiff, Wales. This series will see the last days of the Ponds in the TARDIS, as Karen Gillan and Arthur Darvill return for their final season alongside Matt Smith’s Eleventh Doctor.

Click through for a first look at stars Smith, Gillan and Darvill in costume on the set, as well as an update on some confirmed upcoming guest stars many of you will probably be excited about – particularly if you’re Sherlock or Harry Potter fans.

On returning for his third season as the Eleventh Doctor, Smith says, "It's thrilling and exciting to be back and working with two of my closest friends."

Gillan adds, "It's just brilliant to be back on the TARDIS with Matt and Arthur for our craziest adventures yet."

Their friendship certainly seems obvious in this fairly adorable photo of the three of them from the first day of filming. 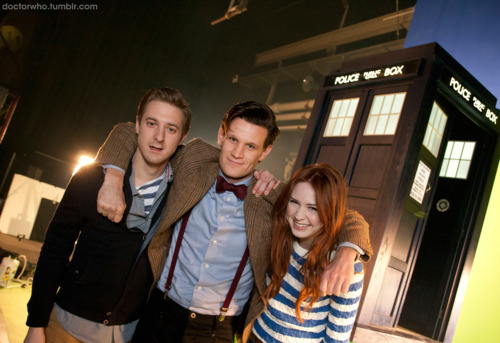 In other Who updates, the first batch of guest stars for the new season have been confirmed. My personal favorite bit of news is that Rupert Graves – better known to many as Inspector Lestrade on producer Steven Moffat’s other show, Sherlock – will be stopping by to do a guest spot.  No word on what sort of character he’ll be playing, but still. That “Wholock” phenomenon is apparently just a little bit real!

For the Harry Potter enthusiasts, Mark Williams, who played Arthur Weasley, is also set to guest star in Series 7 and has actually already been seen on set. While there’s been no official statement about this, rumors are flying that Williams could be playing Rory’s father. (There is a bit of a resemblance there, so I could see that.)

Things are starting to look very interesting for next season! For the Who fans out there, what are you most looking forward to seeing in the new episodes?