Those of us who are fans of both of Steven Moffat’s current productions – Doctor Who and Sherlock – all basically harbor a secret dream that one day someone on one of those series is going to make some sort of wink-wink-nudge-nudge reference to the other and then we’ll all basically pass out from an overload of geek joy.  (There’s even an entire sort of interesting fandom subset called “Wholock” which basically exists to further crossover ideas and things. Internet, you really never fail to impress me.)

Except it appears that that sort of actually happened? Maybe? Well, we’re not sure. But it might have.

Click through for the full story – and don’t worry, those that are concerned about spoilers, even though I’m about to talk about something that takes place in a Series 2 episode, it reveals nothing of the plot unless you were unaware that The Hound of the Baskervilles involves some creepy outdoor settings.

Basically, it kind of looks like the Doctor’s trusty TARDIS might have made an appearance in Sherlock’s world. There’s no way to prove this, but at the very least it’s an intriguing (and amazing) coincidence.

If you look carefully at this early scene from Series 2’s second episode, The Hounds of Baskerville, there does appear to be something that looks an awful lot like a blue police box hanging out in the background in the woods above guest star Russell Tovey.

Check out the photographic and video evidence below for yourselves: 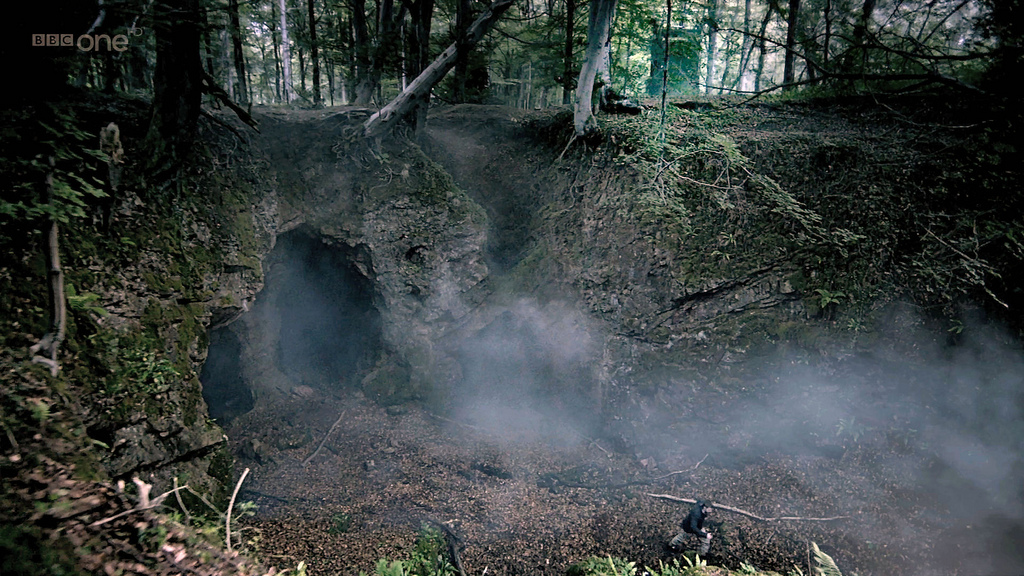 After this episode aired in the UK, Sherlock co-creator Mark Gatiss tweeted that “there’s no TARDIS cameo” in the show and that the presence of this item was a “total mystery” because “there was nothing there at the time.”  Dun dun….. a mystery for Sherlock himself to solve, I suppose!  Could it have been added in as an ultimate in-joke after the fact? I’d like to believe so.

Consider this post the first in a sporadic series I like to think of as “Sherlock: Surviving the Hiatus.” Expect more seemingly random Sherlock-related posts because 1.) I have a serious obsession problem and 2.) There are so many more days to go until May. Let me know if it gets annoying.

Source: My Twitter feed, which was blowing up about this little oddity the weekend this episode aired. Thanks, y'all.

Sherlock Masterpiece Mystery Is It May Yet? Filling Time During the Hiatus Doctor Who Wholock