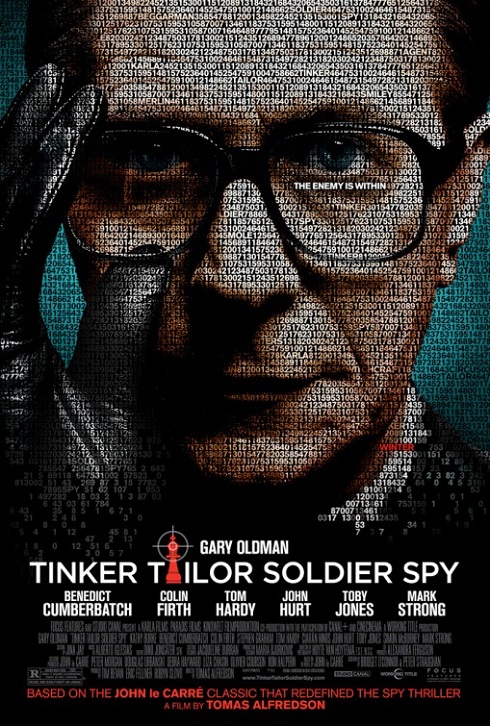 people started screening Mission Impossible 4 for the first time.  Not because the two films are in any way alike, but because of the strong contrast they present to one another. (Full disclosure: I’ve not seen MI 4 yet, but I’m guessing that it’s not probably not moving the needle too far from its three predecessors in terms of tone.)

Tinker Tailor sits firmly on the side of the classic espionage thriller, the kind which does not rely on impressive stunts, nifty gadets or breathtaking explosions to carry the story. Popular mainstream spy films, like the MI franchise and others of its ilk (Looking at you Bond, Bourne) often appear far more interested in the trappings of spycraft than the people who perform it, or the often boring particulars of how they do their jobs. (I imagine it’s a lot more talking than car chases for those folks, most days.) Conversely, Tinker Tailor, as a film, feels a bit like watching a stage play – a good two thirds of it is comprised of various combinations of men sitting in variety of dimly lit rooms and talking, but it’s just as riveting as if things were exploding throughout. It does require you to really pay attention to the many twists, turns, and seemingly throwaway moments that turn out to be anything but.

The film is based on John le Carre’s 1974 novel of the same name, which was also turned into a very popular six-hour BBC miniseries starring Alec Guinness. (Personal aside: I’ve just gotten a coyp of  this and can’t want to watch it.) The film’s premise is deceptively simple: it’s the height of the Cold War and there’s a Soviet mole/double agent operating at the highest levels of British intelligence. Gary Oldman plays master spy George Smiley, whose job is it to sort through the Who’s Who of British character actors that comprise the rest of the cast and determine which of them is passing secrets to the Russians.

So what can you expect if you see it? This is not a movie for everyone, first of all. It’s very intricate and a little bit on the slow side, and it actively requires that you, as a viewer, pay (a lot of) attention, because if you don’t you’ll definitely miss something. There’s a great deal of talking - there has to be, if they’re going to condense a 400+ page novel into a two hour movie – and less in the way of action than a typical MI-style spy film. But it’s a densely plotted mystery with many layers that peel back like an onion, and an extremely well done character piece. I loved it, but there will certainly be those that call it boring rather than intriguing. (I also think those people are wrong, but I can see why the argument is being made.)

If you’re curious about the specifics, click through for my take on the film’s highlights and occasionally problematic areas. If you’ve seen this – what did you think? Leave your thoughts in the comments..

There are a lot of things to recommend this movie – but the biggest plus is the acting. I can’t remember the last film that had this many fantastic performers together just knocking it out of the park.

Why Should You See It?

Though Tinker Tailor has been in limited release the two weeks, it’s actually achieving decent box office numbers – its first weekend in New York and Los Angeles, it averaged over $75K per theater in just four locations. I saw it at the Landmark E Street Cinema here in DC – known for its dedication to artsy and/or indie fare – and it sold out every show that day.

In our area, you can catch Tinker Tailor at either at E Street or Bethesda Row, though word on the street is that the film will have a full nationwide wide release on January 6, so you’re likely to get more options then.  And though it’s early days, there’s already talk about the possibility of a sequel, an adaptation of another La Carre novel, Smiley’s People. There are certainly enough characters introduced in Tinker Tailor to populate another film in the same universe. And I’d watch it for sure!