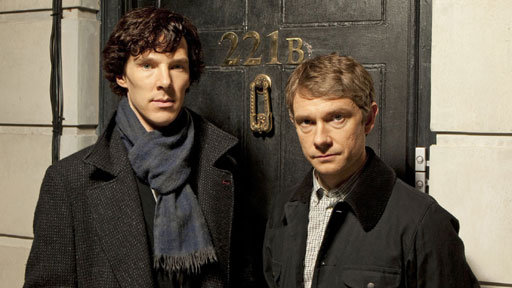 Our rebroadcast of Masterpiece Mystery’s Sherlock continues tonight with the second episode, “The Blind Banker” at 8pm. Loosely based on Sir Arthur Conan Doyle’s short story “The Dancing Men,” the premise involves a mysterious break-in at a major London bank, possible suicides that turn out to be murders, an unintelligible code left in graffiti, a Chinese traveling circus, and an underground smuggling ring.  Just go with it – it ends up being a pretty great ride. This episode also really cements the wonderfulness that is this new Holmes-Watson partnership; Benedict Cumberbatch and Martin Freeman are just gangbusters together onscreen and I would like to applaud the casting director who was genius enough to come up with this pair.

But, to be fair, “The Blind Banker” is my least favorite of the three episodes of Sherlock’s first series. That statement is also kind of like saying, Oh, yes, that’s the Van Gogh painting I enjoy the least, but nevertheless.  Whether it’s because its lacking the really great villain of the other two episodes, whether the mystery is just a teensy bit less compelling and more convoluted than the other two offerings, whether it’s the absence of Lestrade, Mycroft or the other interesting supporting characters from “A Study in Pink” while we’re stuck with the truly dreadful Sebastian, I don’t know.  Maybe it’s just that “Pink” is a really hard act to follow.  All that said, there’s not a lot that’s truly “wrong” with this episode – most of its problems really are more missteps than outright failures – and while it may not reach the heights of the pilot, it’s still loads better than pretty much anything else you could be watching on a Tuesday night.

Click on through for some of my favorite things about this episode – mostly a lot of small moments that add up to a pretty great whole. One thing this episode does do very well is character moments and relationship development – and these are so strong and well done that the centerpiece mystery matters less.

It was actually sort of fun to walk down memory lane about the things that are great about “Banker,” instead of kind of viewing it as a stop on the road to the brilliance that is “The Great Game.” (Which by the way I can’t wait to write about next week!)

So, what really works about this episode?

Benedict Cumberbatch is just a really ridiculously good actor.  I could go on for pages about how wonderful and nuanced and weird and just generally perfect Cumberbatch is in this role, but instead I’ll use just an example. This episode actually has one of my all-time favorite Cumberbatch moments in it.  The set-up: Sherlock is attempting to get in to the apartment building of a recipient of one of those coded graffiti messages and said person of interest is not at home. Cue an amazing maybe twenty second scene that’s just a close up on Cumberbatch’s face on the intercom screen as he puts on a posh accent and tries to convince the upstairs neighbor – whom Sherlock insists is new to the building due to her taped-on nameplate – that he lives in the flat below hers and has locked his keys inside and would she mind terribly buzzing him into the building and also perhaps letting him rappel off her balcony? Cumberbatch’s rapidly shifting facial expressions are ridiculously awesome – awkward embarrassment, earnest friendliness, anxious lip-biting, all in quick succession.  And the moment Sherlock breaks “nice guy” character for a quick second to give John a “told you so” smirk when the woman confirms she is in fact a new resident  is a blink-and-you’ll-miss-it bit of amazingness that I didn’t even catch until a second viewing. But it’s perfect – and, for me, perfectly illustrates why Cumberbatch makes such a fantastic Holmes.  (Bonus points also go to the scene in which Sherlock attempts to establish the sightlines to one of the graffiti messages by creepily popping up from under desks and behind pillars in an office.)

John Watson gets a chance to shine. Martin Freeman deserves at least as many accolades as Cumberbatch gets for his performance on this show.  I know everyone’s first instinct – including mine most of the time – is to fall all over themselves to love on Cumberbatch and his Sherlock.  All the critical acclaim is definitely deserved because Cumberbatch IS amazing, but Freeman’s work as John is equally exceptional.  The best part about “The Blind Banker” is probably that John really gets a chance to shine.  Freeman has the opportunity to show off his wonderful comedic timing – from his battle with the self-checkout at the beginning of the episode, to getting an ASBO accidentally, to just generally putting up with the weirdness that is living with Sherlock.  He’s very funny.  And, in this episode, you can easily see how John is being allowed to develop as a true partner for Sherlock in his own right and is learning to be a real sleuth himself.  John is allowed to come up with answers this time and procure valuable evidence on his own - instead of just asking Sherlock how he came to some brilliant deductive conclusion.  He provides a more practical point of view that Sherlock needs – I’m thinking particularly of the moment where Sherlock starts whirling John around in a weird attempt to try and jog his mind’s eye, and John responds by saying that all of that’s unnecessary because he took a picture of the graffiti message on his phone before it disappeared. Sherlock’s methods are much more piece together the big picture through tiny, seemingly insignificant details like old shopping receipts, and it’s brilliant to watch, but John’s more practical – dare I even say obvious – methods are also needed, because sometimes it takes Sherlock a bit to see the forest for the trees. Love the scene where they literally bump into each other in Chinatown, both having gotten to the same place through different sorts of detective work.

Sherlock and John, clearly on their way to becoming THE Holmes and Watson. The continuing emphasis on the strengthening of Sherlock and John’s friendship is wonderful – as we see all over this episode, they’re at their best when they’re together. Otherwise John can’t manage to get the shopping without incident and Sherlock ends up being choked by assassins in strange houses.  Their interactions still have some rough edges and occasionally frosty moments, but the developing camaraderie between the two is great. Freeman and Cumberbatch excel at the duo’s fast talking banter, and it’s surprisingly lovely to watch as Sherlock comes to the realization that maybe he actually needs his flatmate around a bit more than he’d originally expected, that John’s perspective is a valuable asset, and that maybe, they’re actually good as a team.  Compare the random home brawl that opens our episode – which Sherlock doesn’t even bother to clue John in on – to Sherlock gatecrashing John’s date and actually proclaiming, though petulantly, that John can’t leave because Sherlock needs his help.  The mystery of this episode wanders a fair bit, but the fact that Holmes and Watson are becoming a real team that works together – rather than simply Sherlock standing around deducing everything immediately and John having nothing to do – makes up for a lot. Maybe even for the fact that John’s date Sarah doesn’t seem to realize she could avoid the problem she finds herself in at the end by simply tipping her chair over, but, I digress.

Sarah is actually pretty awesome. I don’t know if Sarah Sawyer is meant to be the Mary Morstan of this particular adaptation or no, but as a character in her own right she’s pretty fabulous.  My aforementioned nitpick about her reactions in the episode’s ending scenario aside, she’s smart, resourceful and feisty - definitely a refreshing departure from the typical damsels in distress that usually populate mystery stories like this. Love when she knocks one of the circus villains in the head! Her character gets bonus points for the fact that she isn’t fazed by the fact that Sherlock spends most of their interactions clearly barely tolerating her existence and she is even allowed to provide a vital clue when she points out to Sherlock that he already has part of the graffiti’s mysterious meaning in hand, but hasn’t realized it yet. (Have I mentioned how much I love that this adaptation has a Holmes who is fallible and clearly NOT all knowing? It’s fantastic.) Plus, Zoe Telford has great on-screen chemistry with both Freeman and Cumberbatch, and I wouldn’t mind seeing more of Sarah next season.

Next week: We finally get to see what all this Moriarty fuss is about in “The Great Game,” an episode where Sherlock as a series does pretty much everything right.