With filming wrapped on the much-anticipated second series of Sherlock, everyone's been waiting for some more information to be released about the new episodes and what we can expect. Finally, it seems that the first actual promotional photo of stars Benedict Cumberbatch and Martin Freeman has surfaced!

[Possible spoiler after the jump, but nothing beyond the photo itself.] 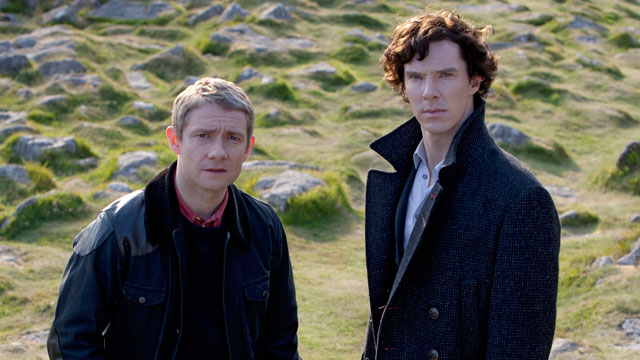 Other than Sherlock’s missing scarf (well, at least *I* miss it, at any rate), this seems to be a pretty legitimate, though mostly non-descript picture.  If you’re aware of the stories being told in this next series and/or the episode titles, you can probably guess which episode this shot is likely from. Out of respect for those attempting to stay spoilerfree this is worded vaguely as possible on purpose (but shoot me an email if you want to know my best guess).

Not sure what this shot’s meant to be used for, if anything – perhaps to promote the rumored British Film Institute screening in December, but really who knows? It may just be a leak, or a particurlarly astute online fan is a supersleuth in training. At any rate, no matter where it came from, it’s fantastic to see something new from the world of Sherlock! Watch this space for more info, as soon as ever we can get it.

In other Sherlock news: Last weekend, composer David Arnold confirmed via Twitter that there will be a Sherlock soundtrack released at some point, perhaps in conjunction with the new series. Keep an eye out for further details on that, as well.