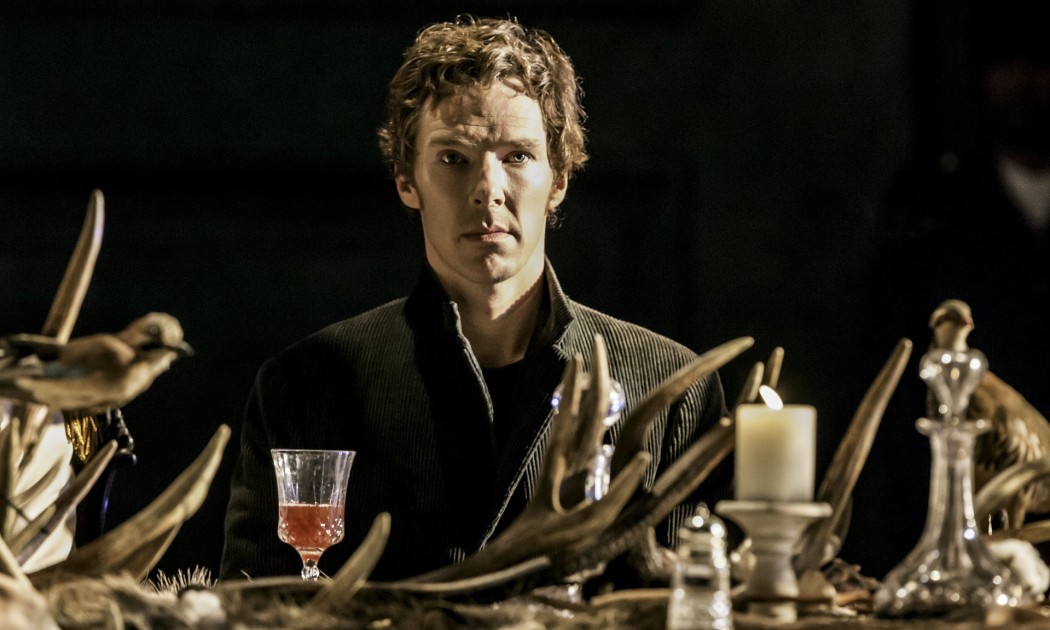 Benedict Cumberbatch, brooding, as Hamlet. (Photo: Johan Persson)
Hi guys! I’m back from a two-week trip to the UK, which was wonderful, though now I feel a bit out of the loop as far as entertainment news goes…bear with me while I catch myself and the blog up!

Good news for everyone who isn’t planning a trip to London this Fall – you don’t have to miss out on seeing the biggest theatre ticket of the moment! Sherlock star Benedict Cumberbatch is currently treading the boards in the West End, playing William Shakespeare’s most famous role in Hamlet.

The production is already something of a phenomenon in England – it pretty much instantly became the fastest selling ticket in London theater history and many fans have camped out for hours for the chance to secure one of a handful of coveted reduced-price day tickets. Cumberbatch’s performance has been met with largely positive reviews, and he leads a strong ensemble cast that includes Cirian Hinds as Claudius, Anastasia Hille as Gertrude, Sian Brooke as Ophelia, Jim Norton as Polonius and more.

Now, you can see the whole thing for yourself without having to cross the pond – National Theatre Live will be presenting a live broadcast of the production on October 15. (In the UK, this will actually be a live broadcast; unfortunately, thanks to time zones, we’ll have to make do with a “captured live” version a few hours later.) You can see which theaters near you are participating at their official website – here in the DC area, you’ve got a couple of area movie theater options for the October date, and then an encore presentation in December at the Shakespeare Theater, which frequently does NT live screenings here in the city, and is a slightly more posh viewing experience than your local multiplex.

I was personally lucky enough to see the actual stage production myself during my recent trip to England, and I can tell you that this is definitely a Hamlet worth seeing. It’s not perfect – there are elements I loved about the show and elements that I thought could do with some improving – but it’s a pretty epic, overall compelling staging. The production design alone is worth the price of admission, in my opinion – the set is just tremendous, and almost as much a character in the show as the humans are. (There’s a bit right before intermission where the set explodes. Really. It’s incredible.)

Get a look for yourself by watching the official National Theatre Live trailer, which will give you a glimpse of Cumberbatch reciting some Shakespeare, while glowing reviews scroll past:

Will you be checking out this Hamlet on the big screen?