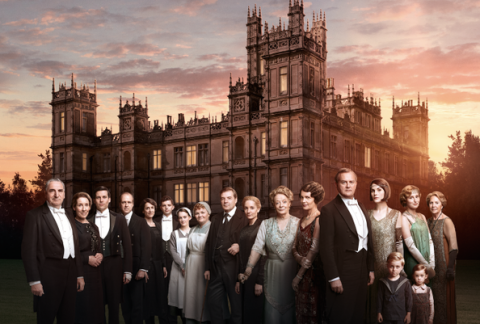 Our very last "Downton Abbey" wishlist post. Sniff. (Photo: (Photo: Nick Briggs/Carnival Film & Television for MASTERPIECE)
Now that the trailer for Downton Abbey’s final season is out and airdates have been announced on both sides of the pond, the end of the series is starting to feel really real.  Sure, we all knew the end was nigh and all that, but on some level many of us Downton fans sort of were operating as though the finale was never actually going to happen.

Some people – yours truly included – may now be finding themselves emotionally compromised or aggressively nostalgic over the thought of the show coming to a close. (Please take a wild guess at how loudly I shrieked when I saw this picture of Michelle Dockery and Dan Stevens together at a BAFTA event.) It’s like the stages of grief, basically.

But the end is happening, and it’s almost here. We’ve got about nine hours left to spend with the Crawley Clan and their various friends, servants and associates, so, here’s hoping that the show makes them count.

However, just because I am something of an emotional wreck about this situation does not mean that I don’t have a firm list of demands, hopes and general thoughts about things the show needs to make sure to deal with before we leave Highclere behind forever. And obviously we all need to talk about them.

I am, thankfully, somewhat hopeful that this dream may come true, given the fact that there’s a shot in the Season 6 trailer that seems to feature Team Servants lined up in something that looks like a church pew. While there are several other potential candidates in the running to get “final season weddings” on Downton – namely Mary and Edith – the Carson/Hughes nuptials are the only service that would be likely to spotlight the other downstairs residents so heavily. So here’s hoping. It seems obvious that they do get married this season, since there are several shots featuring Carson giving up his room in the great house, as well as what appears to be the two of them wandering off down the road to what I assume must be their new home. In short: My entire Season 6 wishlist could probably be comprised simply of: as much Carson and Mrs. Hughes as you can cram into a nine-hour story, but I suspect other people may have different interests and priorities, so I’ll settle for the wedding and happily ever after.

Bring Back Matthew Goode. We all know that whoever Mary ends up with, most people are probably just going to wish Matthew was still alive, so can we just make sure she gets paired off with someone that isn’t completely objectionable?

We spent two years watching her go back and forth between two utterly useless dudes, Tony Gillingham, the stalker, and Charles Blake, the rich guy who wanted to front like he wasn’t. Neither of these romantic interests set the world on fire – Gillingham was, quite frankly, sort of repulsive – but at least the Downton powers that be seemed to realize that neither was a suitable match for Mary and, subsequently, wrote both of them out. And, lo, it came to pass that Matthew Goode suddenly appeared in last season’s Christmas episode as Henry Talbot, a rich, sarcastic, sassy, good-looking guy with a fast car who seems tailor-made for Mary.

Henry Talbot is ticks all the “new love interest boxes” in the extremely sort of blatant, manipulative way that generally puts my back up, except Matthew Goode has such great chemistry with Michelle Dockery. Plus it seems that they’ve just decided to have Henry not take any crap from Mary right out of the gate – which makes the two seem refreshingly well-matched, particularly for a romantic pairing that will likely forever be in the shadow of one-half’s previous relationship.

Since I can’t imagine that they will allow this show to end with the classic move of Mary “choosing herself” or deciding to focus on raising her children or whatever, we probably have to deal with her romancing someone. And Henry Talbot seems like a better choice than many others she’s made. So, let’s do that.

Daisy Needs to Get a Life. Can Daisy just move to Mr. Mason’s farm please? I still don’t understand why she’s even bothering with any other life plans, and it’s obvious that that’s where her storyline’s been heading since William died way back in Season 2.

Over the years the show has tried some truly disastrous storylines for Daisy – the horrible love triangle with Alfred and Daisy, the ridiculous twist where she becomes obsessed with learning and it makes her suddenly become rude and terrible to people who’ve done nothing but be supportive towards her. Can she just please take her new love of learning and apply it to skills that would help her run the Mason farm? Plus, this would mean more screentime for the always amazing Mr. Mason, who is awesome, and unafraid to hit Daisy with real talk and sense when necessary.

Please Stop Torturing Anna. Anna Bates is probably the most unlucky character on television. Despite the fact that she’s one-half of one of Downton’s most beloved couples, she has experienced approximately three seconds of happiness. Her myriad of ridiculous struggles have included a brutal rape, her love interest-then-husband being suspected of murder – not once but twice – and even ending up in jail for it at one point, and the surprise revelation of an abusive stepfather in her past. Anna herself was even arrested on suspicion of killing her rapist, and though she was released from jail at the end of last season, there’s an overhanging feeling that this terrible storyline isn’t over, since we still don’t know who killed Green. (Though, honestly, does anyone even care anymore? I’d be fine with it if we never mentioned it ever again.)

In short: Bates and Anna’s grim, depressing storyline was basically the worst part of last season. So, please, can we get something happy for them? Have a baby, adopt a puppy, open that bed and breakfast they’ve talked about for years – just anything that doesn’t involve Anna crying anymore, or either of them facing jail time. It doesn’t seem like that much to ask, right?

More Molesley! Personally I have always had a soft spot for Molesley, particularly ever since he had that conversation in his dad’s backyardway back when about what he was going to do with his life now that Matthew was dead. He’s awesome. I’m also 100% on board for the Molesley/Baxter flirtation that seemed to be building last season and certainly hope that continues.

But, what I really hope we get to see more of in Season 6 is just further development for Molesley in general – one of the scenes I loved the most last season was the random revelation that he had a keen interest in history, and that he’d wanted to be a teacher before life circumstances forced him into a life of service. Molesley is just so interesting to me – the choices he’s made, the life he’s built, the way he’s willing to adapt himself to less than ideal circumstances, but not turn into a garbage person like Thomas. And especially after years of basically being the butt of the joke around Downton it would also just be nice to see him get some happiness too.

Do Something Else with Thomas. Can we please figure out something to do with Thomas that isn’t him coming up with elaborate schemes to ruin people’s lives? His character was at his most obnoxious in Season 5’s Christmas special with his attempt to expose Lord Sinderby’s illegitimate child, and while scheming Thomas is a great look for Robert James-Collier, surely the whole Thomas twirling his mustache in a corner and plotting thing has run its course by now?

Given the setting of this show – history is history as much as we may not want it to be in some aspects – it seems unlikely that we’re about to suddenly witness a romantic happily ever after for Thomas, but it would be nice to at least see him make some sort of peace with himself and his identity. Whether that means he leaves service entirely or just goes to work somewhere else – possibly in a less rural environment? – or decides he’d rather learn to do something else, I don’t know. (And honestly don’t particularly care.) I’d just like to see some sort of forward movement for his character before the show ends.

How about you guys? Do you have any particular plot points that you feel have to happen in Season 6? Let’s dish.