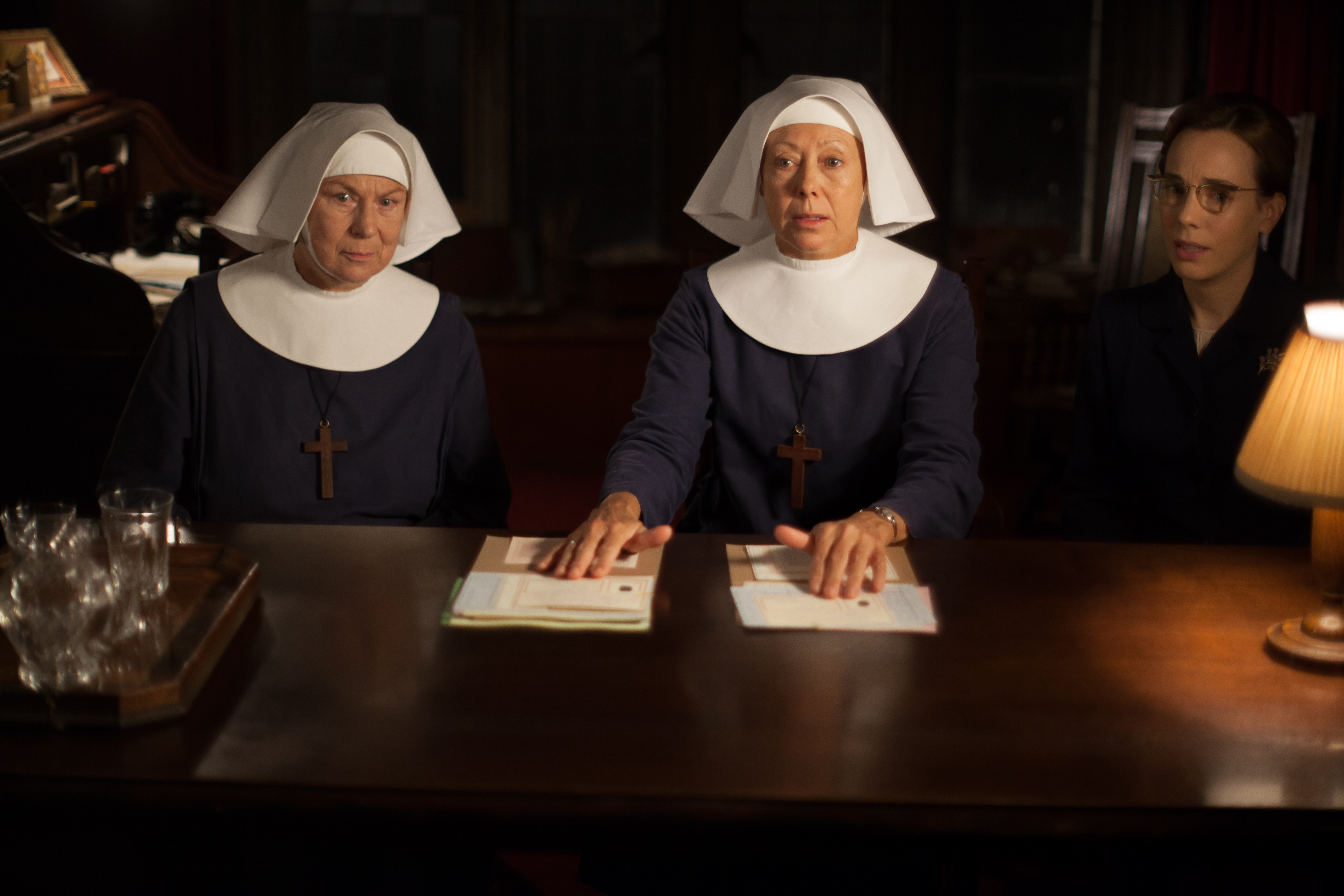 Welcome back to this our next to last Call the Midwife recap and quite a heartbreaker it was. The power of love in its many forms is the main premise of this show; be it the love of parents for children, between romantic partners, or among untraditional families as well. All these varieties were on display in this week’s installment so let’s get right to it and let the lovefest begin.

It may be Halloween but love is busting out all over Poplar like Valentine’s Day. While the newfound yet mature courtship of Fred and Violet is one shippers can root for, it is our first storyline involving Gert (Sherlock’s Una Stubbs) and Tommy Mills (the late, great character actor, David Ryall) that ends up serving as an inspiring example of what enduring love is all about.

Tommy Mills is an elderly invalid suffering from severe bedsores. He is cared for by his devoted wife Gert who is quite frail herself. Sister Mary Cynthia comes regularly to clean and dress his sores. But when Nurse Gilbert stops in and tries her best to convince Mrs. Mills to sign on for the council’s free laundry service, she politely declines. The young nun explains to Barbara afterwards that the couple lives for one another and Gert takes pride in caring for her husband. Barbara must wait until help is requested.

Cynthia also reveals that Tommy and Fred are cousins. When she next sees the handyman, she kindly suggests he stop in to visit the Mills when he’s not too busy. Fred, uncomfortable with chit-chat, recruits Violet to come along when he goes to look in on his ailing relative.

As expected Violet is a good intermediary and the visit goes well until she walks in on Gert checking on a nasty looking lesion on her chest. Barbara has just dropped in to turn Mr. Mills (a promising treatment prescribed for healing bedsores more effectively) when she stumbles upon Violet and Gert discussing her wound. Mrs. Mills is distraught at the thought of worrying her husband or taking away from his care. Barbara and Violet reassure her that there is enough help for both of them and that she must be seen by Doctor Turner who in turn refers her to a specialist.

The specialist tells Mrs. Mills that she needs a radical mastectomy and that while he can’t promise she won’t die after having the surgery, she will certainly die without it. As they leave the hospital, Gert confides in Barbara that she always thought and hoped Tommy would go first. That way he wouldn’t have to be alone. Nurse Gilbert tries to convince her that she mustn’t dwell on those thoughts, only on getting well.

Meanwhile back at the Mills’ house, Fred and Tommy are having a heart to heart about how lucky they are to have Gert and Violet in their lives. But Fred protests that he can’t compete with the memory of Violet’s deceased husband because he was perfect. Tommy insists that no one it is perfect and it is love that perfects us. Alas Fred has already told Violet in not so many words that he won’t be wooing her any further.

When Mrs. Mills returns home with her diagnosis, she and Tommy discuss their options. Gert protests at first, but Tommy wants her to have the surgery. In the short run they will be apart, but it’s her best chance to stay with him as long as possible. She agrees to go and the Nonnatus staff reworks their schedule so that they may stay overnight with Tommy and care for him while his wife recovers. 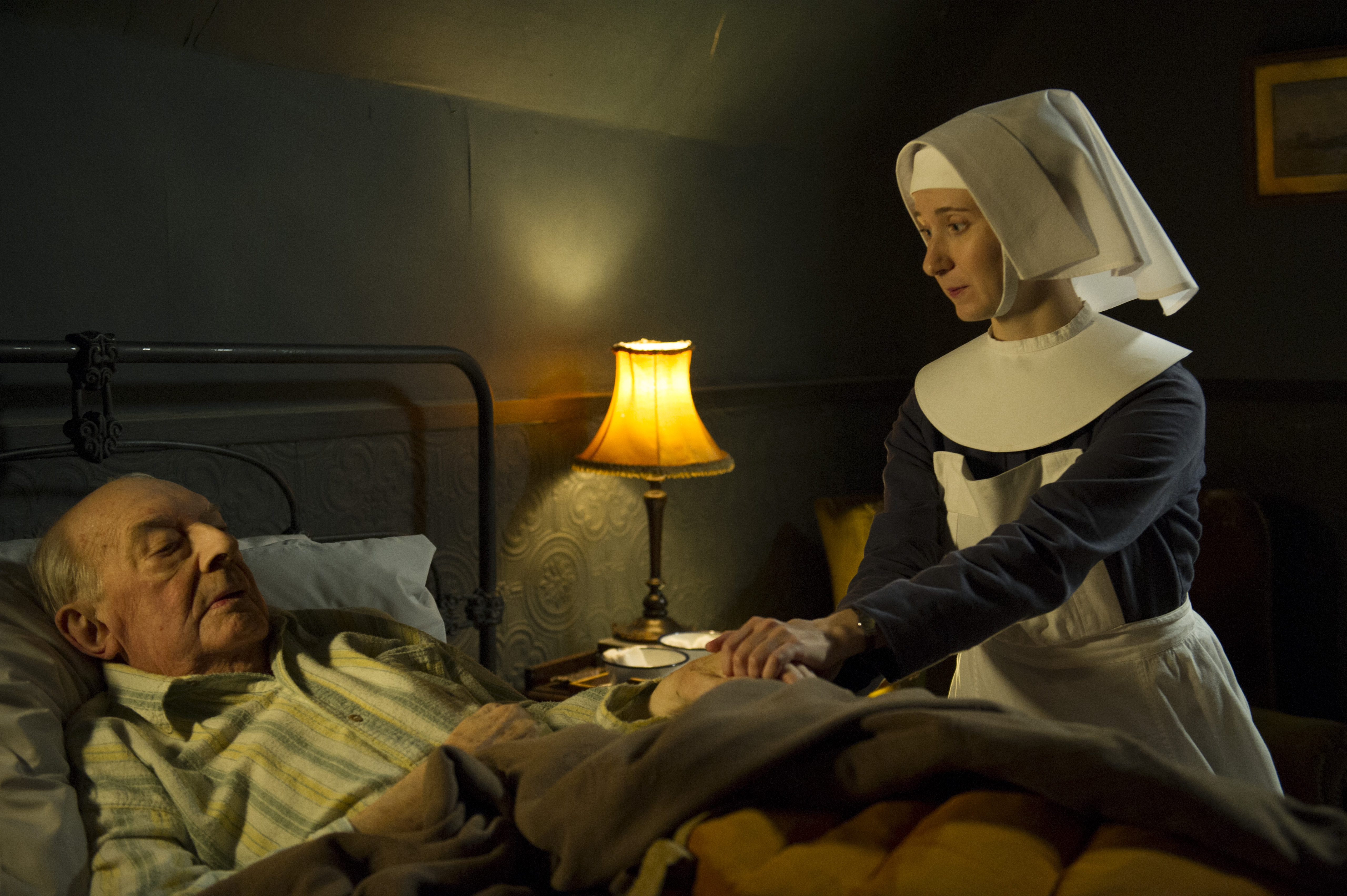 The next time Fred stops by Violet’s haberdashery he finds her packing up her stock and possessions. She has just been getting by with the shop and her son in Plymouth has invited her to stay with him indefinitely. The finality of her decision and the Mills’ example of abiding devotion is what moves Fred to declare his wish to be with her always. He asks her to marry him to which Violet happily agrees.

The second story is of two old school friends reunited in the Poplar maternity hospital.  Marion Smith (Katie Moore) and Shirley Dent (Lisa Greenwood) find themselves delivering daughters on the same night in the same place. Shirley seems genuinely happy to reconnect with “Goldilocks” but her former classmate barely seems to remember her. As she points out, “School was a long time ago,” making it clear Marion has no interest in picking up where she and Shirley left off.

When a fire breaks out in the hospital kitchen, the patients are evacuated as quickly as possible. Sister Evangelina grabs the Smith and Dent babies and once outside, hands them off to the corresponding mothers. (Extra points if you saw where this was going before the reveal.)

The mothers are sent home to be seen daily by a midwife. The Dent baby, Jackie, is thriving, gaining two ounces virtually overnight.  On the other hand, Sister Evangelina notices that Deborah, the Smith’s daughter has blueness in her lips which requires examination by Dr. Turner. Patrick suspects a heart murmur which is confirmed at the St. Ormands Street Hospital. He explains the stent procedure necessary to fix the hole in Deborah’s heart, but it will have to put off until she is older. The baby will require a lot of care if she is to survive the wait.

At the hospital, Sister Evangelina consoles Mrs. Smith regarding her daughter’s condition. Marion mentions the baby’s birthmark, what her grandmother called an angel’s kiss, which promises God’s protection. Back at Nonnatus, Sister Evangelina finds Trixie looking through the birth log for information Shirley Dent requested for Jackie’s baby book. Trixie, who delivered the Jackie, noted a distinctive birthmark on the baby which has since faded away. 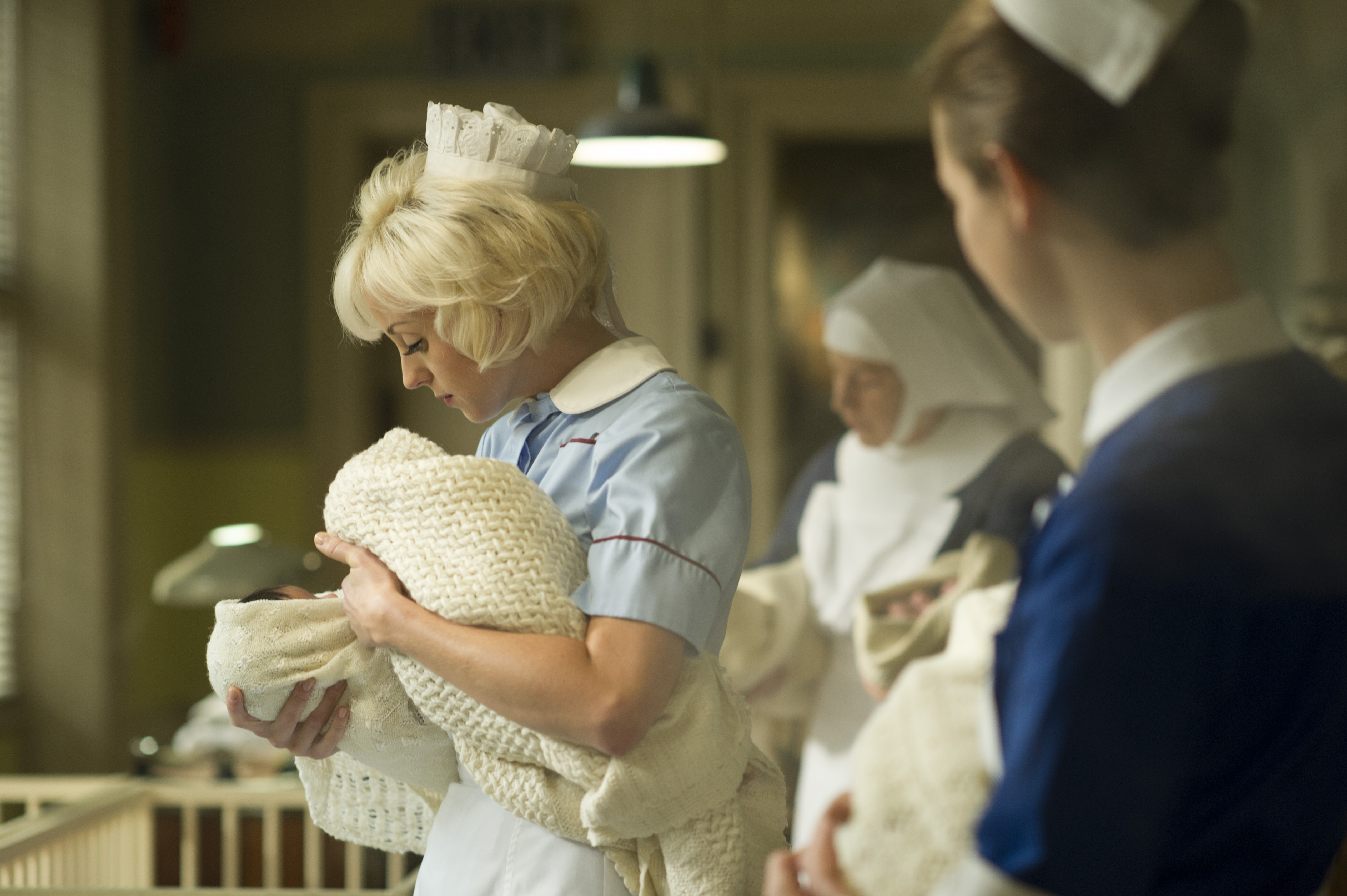 Yep, Sister Evangelina quickly puts two and two together. She arrives in Sister Julienne’s office inconsolable about the mistake she’s made. The nuns verify the mix-up by checking the baby’s blood types against their parents’ and Sister Evangelina’s worst fears are confirmed. She has sent the wrong babies home with the wrong parents.

The sisters and Mrs. Turner prepare to break the news to the Dents and Smiths. Sister Evangelina feels she should do it alone since the fault is hers. Sister Julienne overrules her saying that Evangelina is her family and they will find a way forward together.

As the facts are presented to the parents, the fathers are angry and frustrated, Shirley wants to know why her daughter is in the hospital and, oddly enough, Marion seems to want to keep the baby she has. She berates Shirley for never being serious about anything in her life and doesn’t believe her to be capable of taking care of a critically ill infant.

The couples leave with nothing resolved and Sister Evangelina feeling more guilty and worthless than ever. After dropping some china in the kitchen, she breaks down once more, clearly unable to forgive herself. Along comes Sister Monica Joan, Evangelina’s most surprising ally this series, and tells her that not only is she not useless, she is irreplaceable and they would be lost without her. The exchange ends in a short, but sincere hug. Hurray for lucid and wise, Sister Monica Joan!

The switched at birth baby drama is resolved when both mothers meet at the hospital where Deborah is under observation. Though Marion still feels she should stick with the hand she’s been dealt, Shirley explains she wants to care for the baby she carried and grew to love more each day. When baby Jackie fusses in her pram, Marion picks her up and feels an instant connection to her birth daughter. Though it’s not explicitly said, we can imagine that the babies will be reunited with their biological parents in short order. 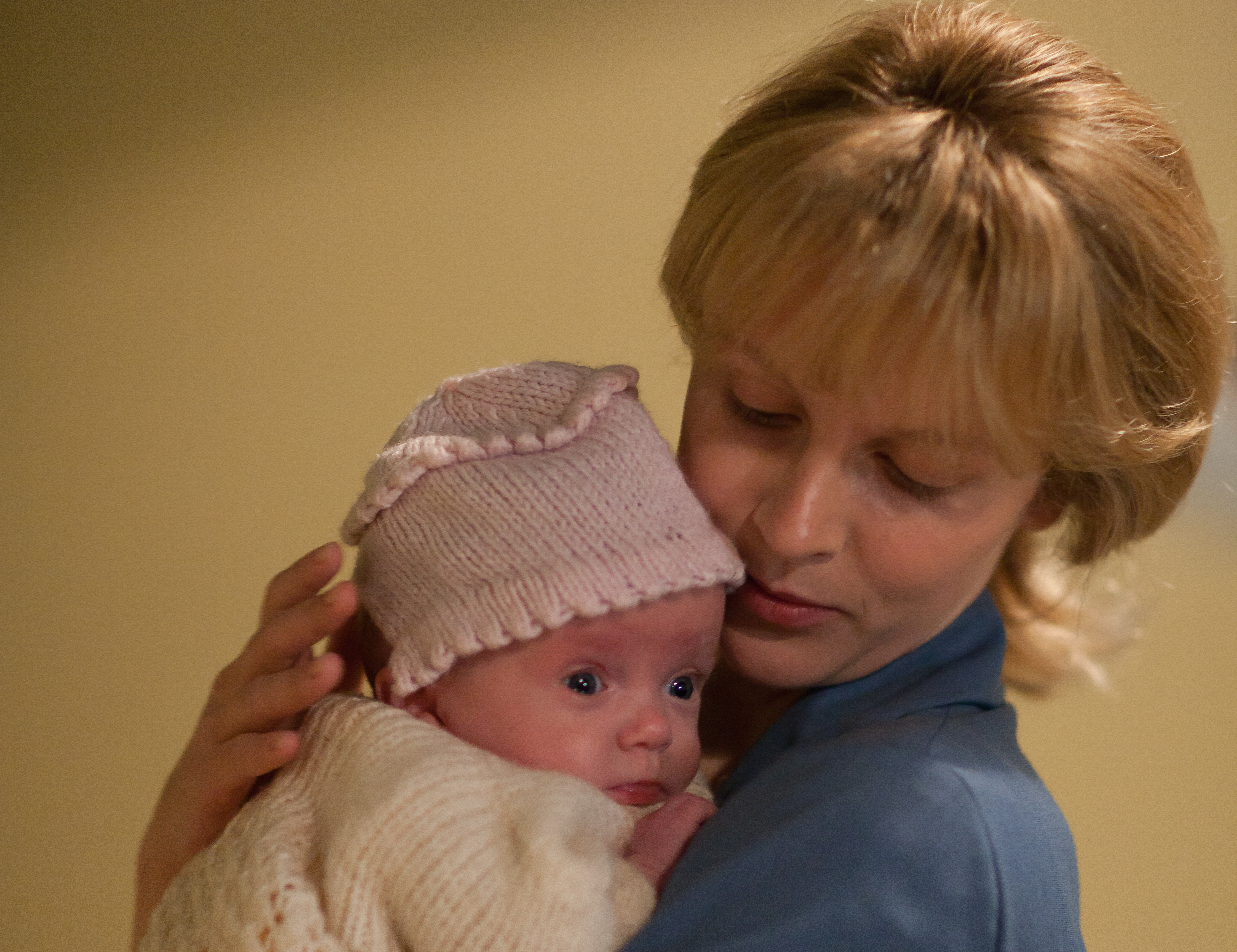 There was another story in the episode which felt not quite fleshed out to me. The quest of young Glenda Severs (Kayci Hamill) hoping to see the ghost of her mother on Halloween. We learn in short order that her mother is not deceased, but ran out on the child when she was an infant, leaving a man who wasn’t even her biological father to raise her as his own.

There was a lovely exchange between Glenda and her dad (Patrick Molyneux) when he tells her how much he treasures her and that her mother would have loved to be there to see her grow up.  It just seemed like a full-blown plotline that was cut and trimmed to fit the episode – how parents can love children despite an actual DNA connection.

So that leaves us with a wedding to attend (perhaps budding photographer Timothy Turner can be in charge of wedding snaps); Trixie’s alcohol problem to come to a head; the continued anguish of Nurse Mount and her girlfriend Delia; and yes, the promised return of Chummy!

See you for the finale next time and please share your thoughts about this week’s episode in the comments!