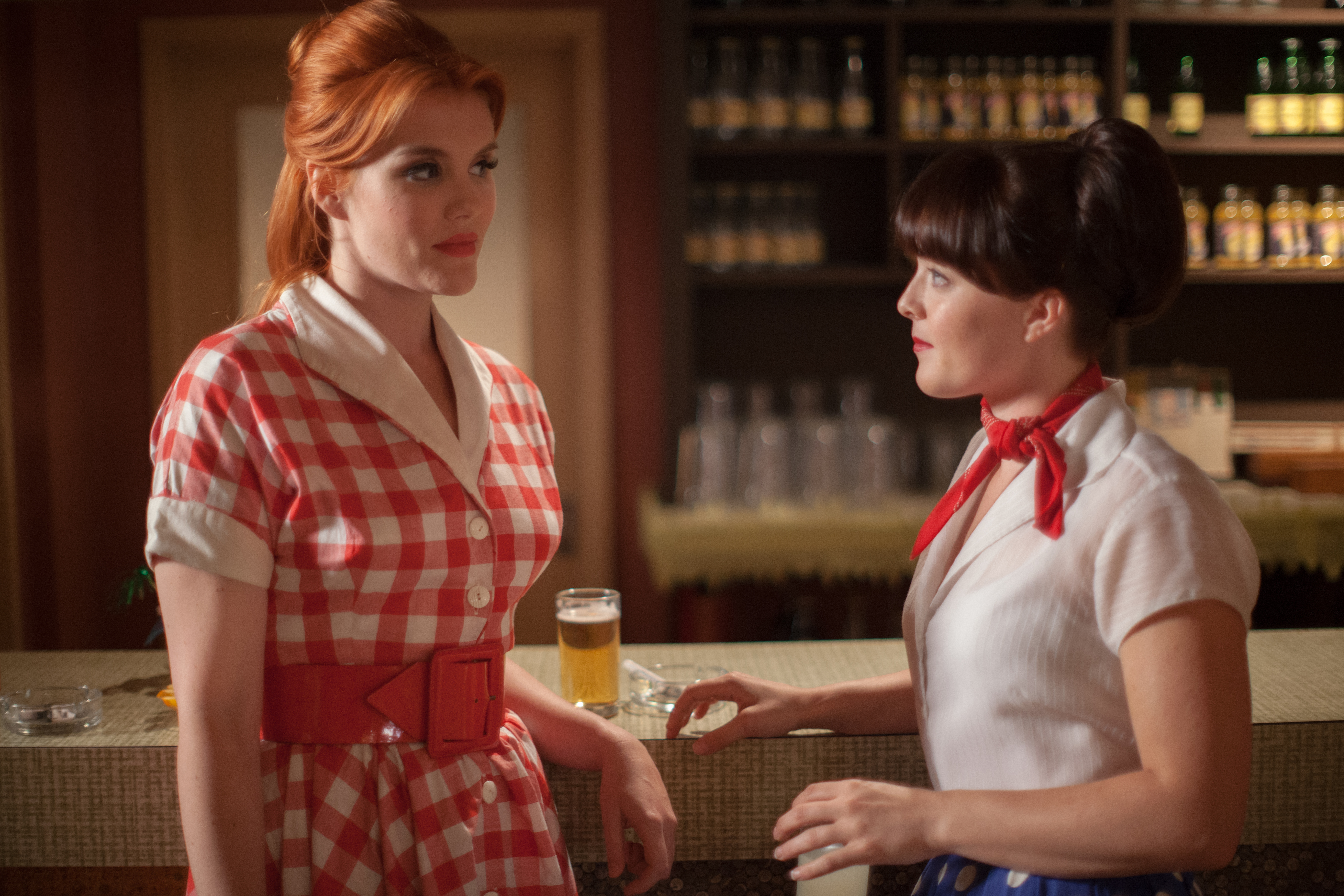 Patsy and Delia get their square dance on. (Photo: Courtesy of Robert Viglasky / © Neal Street Productions))
Previously on Call the Midwife: Last week's recap is right this way.

Before we get into this week’s storylines, can we just say, “Welcome Home, Sister Evangelina!” We’ve missed your plain-spoken opinions and your compassionate dedication to your patients. It’s apparent scuffles will persist as the Sister reclaims her previous role from Nurse Crane, but in time, I believe they’ll return to that unspoken truce they’d achieved when Evangelina left for her hysterectomy. Now we just need Chummy and all will be right with the world (or at least, Poplar).

Speaking of Chummy, her scouts are holding a fundraiser! Patsy is organizing a square dance to raise money to get the cubs to the annual jamboree. But with events like this come serious wardrobe dilemmas – checked shirt or ironic poodle skirt?

And then there’s the issue of who to ask to the dance. Seems Fred and Violet Gee (of the buttons and bows shop) are getting friendlier since she joined the civil defense corps. Both widow and widower seem to enjoy one another’s company and Violet is obviously pleased to accept Fred’s invitation to the dance. This blooming romance is contrast against the secret relationship of Patsy and Delia who long for a time when they can dance together as a couple in public as well.

This week’s feature stories include a touching circle of life moment and a very difficult medical decision for a young woman in love. We learn a surprisingly private fact about Nurse Crane and Sister Mary Cynthia returns to midwifery with a vengeance.

First off we have seventeen-year-old Paulette Roland (Nell Hudson). Nurse Crane is sent round to her house to administer her insulin injection. However, efficiency is on our nurse’s mind and she has decided that the diabetic patients on the district rolls should learn how to inject themselves. Dulcie Roland (Matilda Ziegler) and her daughter balk at this suggestion, but Nurse Crane is having none of it. Meanwhile, we learn that Paulette has been nauseous of late and actually gets sick during the nurse’s visit.

It only takes the additional information that young Miss Roland has a boyfriend, Vaughn Sellars (Sam Gittins), who comes round when her mother is away to realize Paulette’s nausea is not being caused by her diabetic condition. Nurse Crane picks up on this as well and sends off a urine sample for a pregnancy test right away. Apparently in 1960s Poplar, pregnant diabetics have almost no chance of a successful outcome.

When Dr. Turner calls with the confirmation that Paulette is indeed with child, he and Nurse Crane jump into action. Nurse Crane breaks the news to mother and daughter and when Paulette has to admit that the results are no mistake, her mother is not pleased. She goes on a tirade mostly against Vaughn, the no-good boyfriend, who has recently been released from juvenile detention and is now on probation. Nurse Crane attempts to defuse the situation by bringing in Dr. Turner. The two of them try to convince mother and daughter that it is Paulette’s health and not the character of the baby’s father that should be their main concern. Dr. Turner recommends a medically sanctioned termination in a hospital as Paulette’s best option. 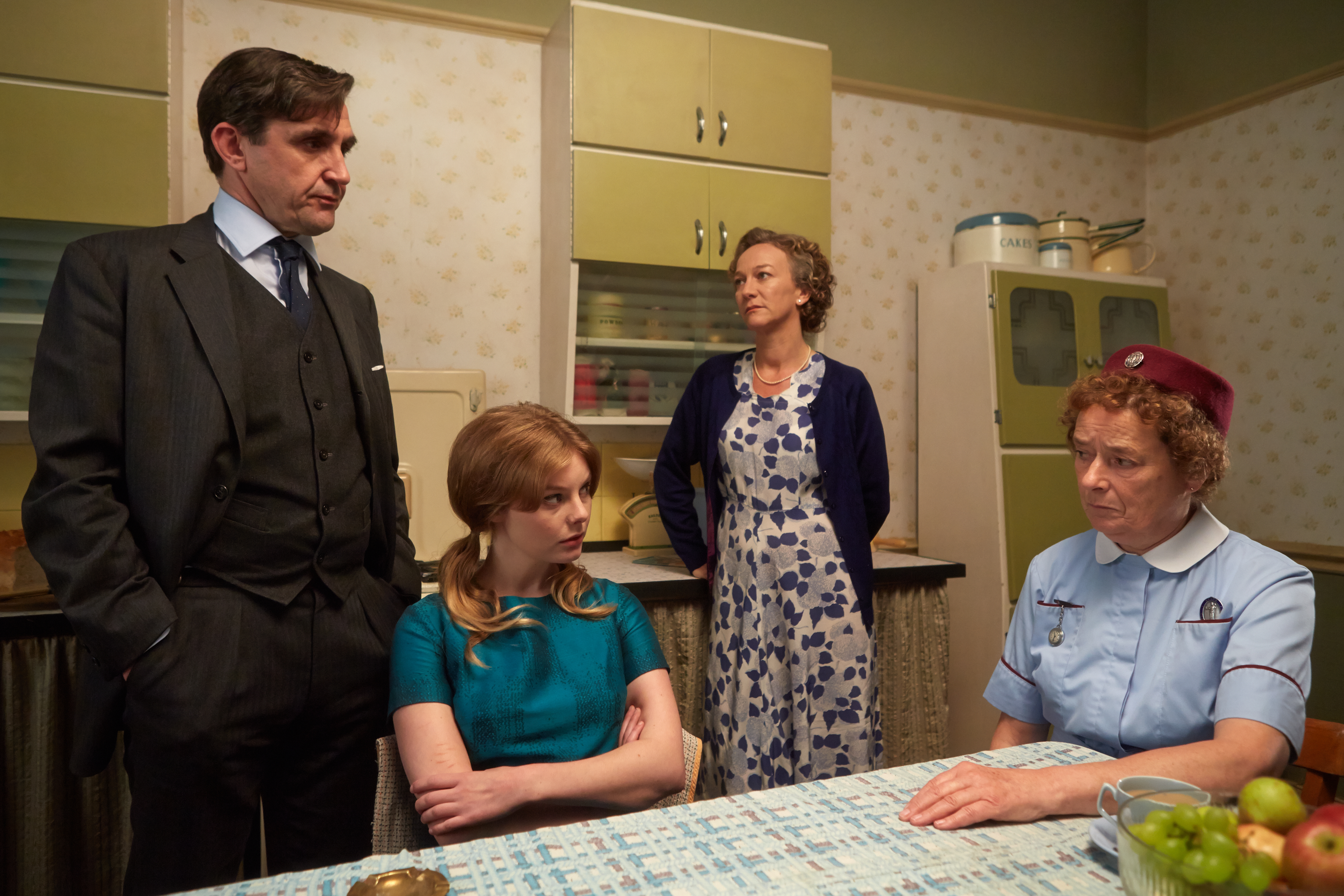 Since her daughter is under 21, Mrs. Roland is in charge of making such decisions and goes along with Dr. Turner’s advice. Amid this family and health crisis, Vaughn shows up at the Roland home to announce that he intends on marrying Paulette. (To be fair, Vaughn seems to be a fine young man. It’s revealed that he comes from a Traveller/gypsy/Roma (I’m covering all my bases here) family when his little brothers steal the hubcaps from Nurse Crane’s car. Vaughn returns them and tells Nurse Crane he is trying to change his life by being responsible and above all, honest. He doesn’t want his baby to be born out of wedlock. Nurse Crane shares that she was an illegitimate child, but she didn’t let that stop her from making something of her life.)

As a delay tactic, Patrick has Paulette admitted to the maternity hospital as a social case until a bed becomes available at the London for her termination procedure. Paulette sees this as a good sign as she believes there is no true medical reason for her to end her pregnancy and it’s just her mother’s wishes for her and Vaughn to be kept apart.

Nurse Crane concedes that she might handle things differently if she were Paulette’s mother, yet she still tries to make her see that the risks to a diabetic mother and her child are very real. The baby could grow too large; it could develop abnormally or even die. This pregnancy puts Paulette’s life in danger as well.

Unfortunately the stay at the maternity hospital doesn’t last long. When Paulette learns she is to be moved later that day, she plans to run away and asks Vaughn to join her. He has a promising job interview and a cousin who lives right outside town where they can stay for a while. So the two young lovers set off to start their lives together…

We know this won’t end well and sure enough Vaughn and Paulette can’t make it to his cousin’s by dark and so must resort to camping outside. Paulette’s blood sugar is dropping, she needs something to eat and she’s run out of insulin. As he watches her condition quickly deteriorate, Vaughn knows he must do what’s best for her even if that means they can’t be together. So he hot-wires a nearby car and drives her to the maternity clinic where Sister Evangelina takes her in and starts working to bring her blood sugar back up.

Poor Vaughn! Before he’s barely parked the car, a sharp-eyed police constable notices the license plate and takes the young man to jail. Once there, Vaughn uses his one call to contact his trusted friend, Nurse Crane. She offers to speak up for him in court and will pass on the message to Paulette that he loves her. In the end, Paulette and her mother reconcile. Dulcie understands that Vaughn saved her daughter’s life and she will let him know when Paulette gets out of surgery. Mrs. Roland also tells her there is always hope that a few years from now diabetic women will be able to bear children more safely and she’ll have another chance for a baby.

In the second story we meet some of Vaughn’s family who are living on an improvised camp site in Poplar. When Sergeant Noakes goes there to investigate the whereabouts of Nurse Crane’s hubcaps, he discovers there is a young girl living there with a newborn baby. He alerts the midwives, but tells them if they choose to visit, they shouldn’t go alone.

Sister Mary Cynthia and Trixie venture out to the gypsy camp where they encounter a woman named Attracta (Maria Doyle Kennedy) who is the midwife for their community. She lets them know that their help isn’t needed and Breda (Anne O’Riordan), her niece who has just given birth, is sixteen and married and so no concern of theirs. Breda, however, wants the midwives to have a look at her baby and invites them to her caravan. They check the child over and find him to be in good health, just slightly jaundiced. Cynthia offers to come back, but is reassured that Breda’s aunt is doing a good job with the births at the camp. She also notices that Attracta herself is heavily pregnant.

When Sister Mary Cynthia makes her return visit, she comes across Attracta who is nursing her grandmother, Pegeen (Rita Davies). She brings her tea in her favorite cup, but it’s still difficult to get her to take anything in. The sister offers to bring Dr. Turner to see her, but Attracta declines since Pegeen would not want to be moved to a hospital.

The next time she stops by, Cynthia brings the elderly woman her tea in teapot so she can drink from the spout more easily. She suspects Pegeen is dehydrated. Attracta tells how her grandmother used to deliver all the families’ babies and that Pegeen raised her after her own mother was gone. She owes her more than she can repay. Sister Mary Cynthia offers her midwifery services since she knows Attracta will have to go through having this, her eleventh child, alone. 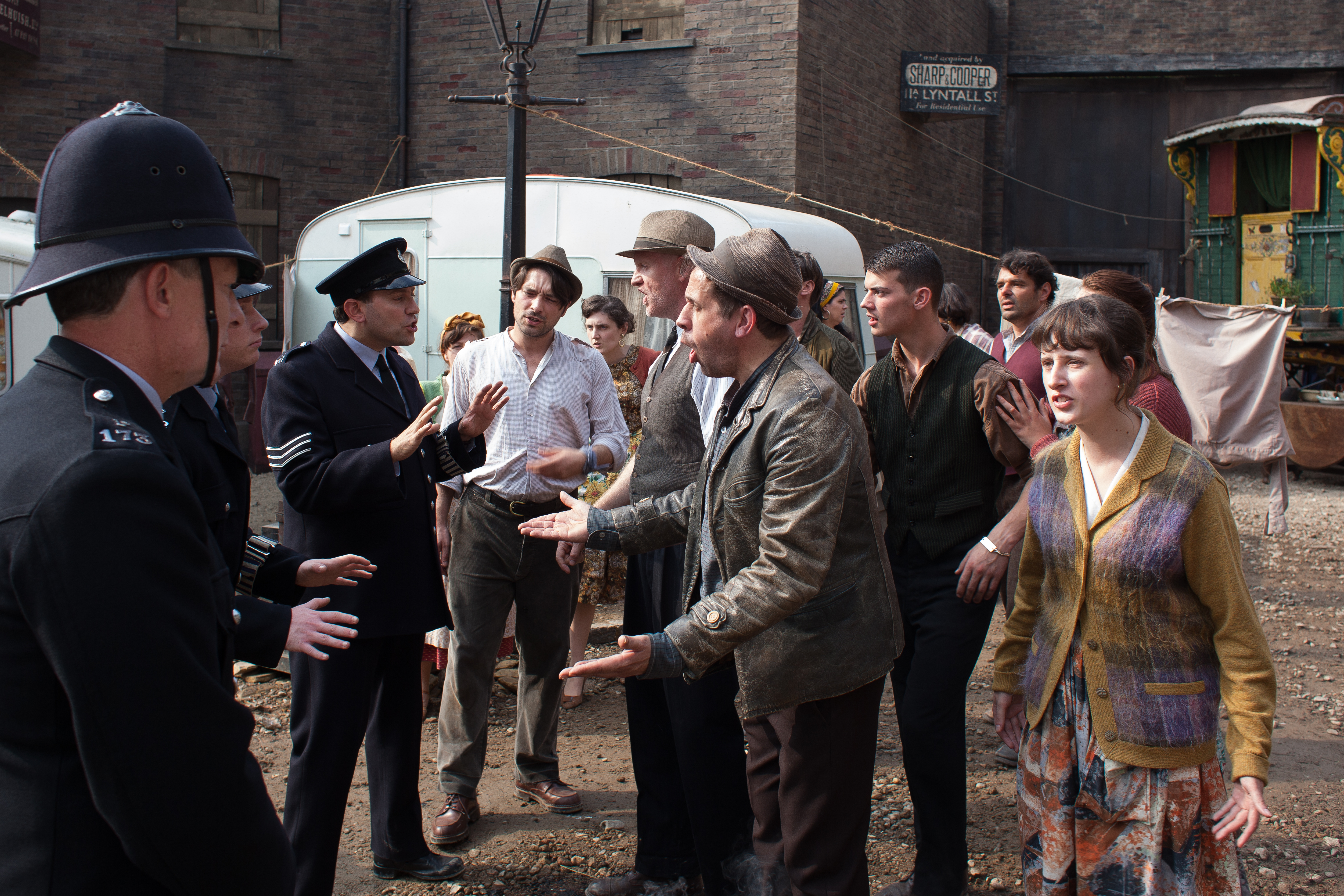 Not long after, Cynthia arrives back at the site to discover the police are serving the itinerants an eviction notice. They require a camp ground permit to stay there and the sister asks Peter if the eviction can be held off due to Pegeen’s health and the presence of a newborn. Before anything can be decided, we see that Attracta has gone into labor. Sister Mary Cynthia puts on her most stern nun voice and insists the eviction be put to a stop until she gives her permission.

Attracta delivers a boy and to everyone’s surprise, Pegeen rises from her death bed and walks under her own power to the caravan to see her new great-grandson. Attracta is touched and finds it fitting that her grandmother has been there to see her first child and her last. Shortly after, Pegeen dies. The family sets fire to her caravan with her inside (I’m assuming). They clear out from the site, but before they disappear completely, Breda gives Sister Mary Cynthia Pegeen’s tea cup. At first she refuses because nuns are not supposed to have personal possessions, but Breda says just consider it a loan. Pegeen would like that.

And there you have it, another touching, life-affirming episode has come and gone. Only two more to go before the series is over!  I’m not sure what’s in store, but I assume there’s more to come on the Fred and Violet front. I also suspect Trixie’s drinking problem has not been resolved just yet. If nothing else, we can be happy that Timothy Turner finally gets to wear long trousers (thanks to his father). And keep the faith just a little longer – Chummy is set to return in the Season 4 finale!

Please share your Call the Midwife thoughts while there’s still time! The whole series is game for discussion.