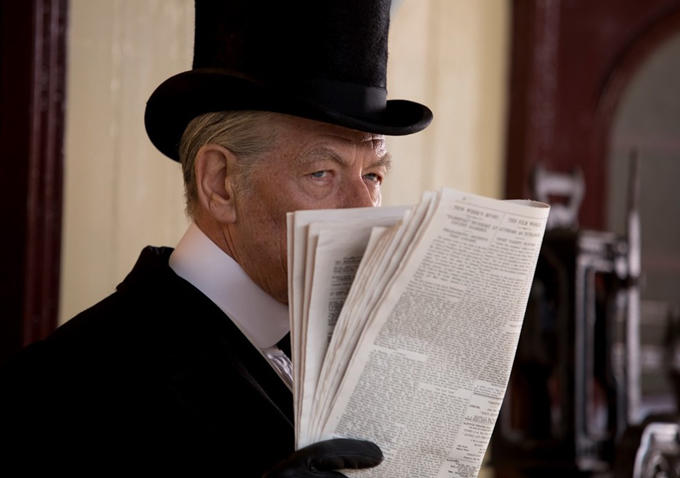 Ian McKellen as Sherlock Holmes, with a particularly amazing hat. (Photo: BBC Films)
The full trailer for upcoming big screen Sherlock Holmes saga Mr. Holmes has arrived and, while it represents at least the fourth mainstream portrayal of the great detective to grace popular culture in the past five years, it seems safe to say that this film is doing its best to set itself apart as something different.

Based on the novel A Slight Trick of the Mind by Mitch Cullin, the film follows the adventures of the great detective near the end of his life. At the age of 93, Holmes has retired to Sussex, where he lives with a housekeeper (Laura Linney) and her young son (Milo Parker) as he struggles with getting older and the perils of encroaching dementia.

And, of course, there’s the fact that it stars the great Sir Ian McKellen, one of those actors who is of such a caliber that most people would happily watch him read the phone book, let along play Sherlock Holmes. (I have actually watched McKellen read the phone book, for the record, and it was still a mesmerizing performance. Just so you know.)

Interestingly, unlike the first teaser trailer which focused much more on Holmes’ weakening mental state, this longer trailer features a bit more about what it means to be a legend that’s gotten older. We see Holmes working on a memoir about his life, attempting to correct the misconceptions about him that persist thanks to Watson’s stories, and retelling the story of a case from thirty years prior.

This trailer almost makes me feel like this movie isn’t going to be a complete emotional trainwreck for me, but then I realize that’s probably some sort of fake-out-on-purpose and we should all pack a boat load of Kleenex anyway. This just doesn’t seem like the kind of film that’s going to end happily to me.

Mr. Holmes is slated to hit US theaters on July 17.

Anyone else looking forward to it?