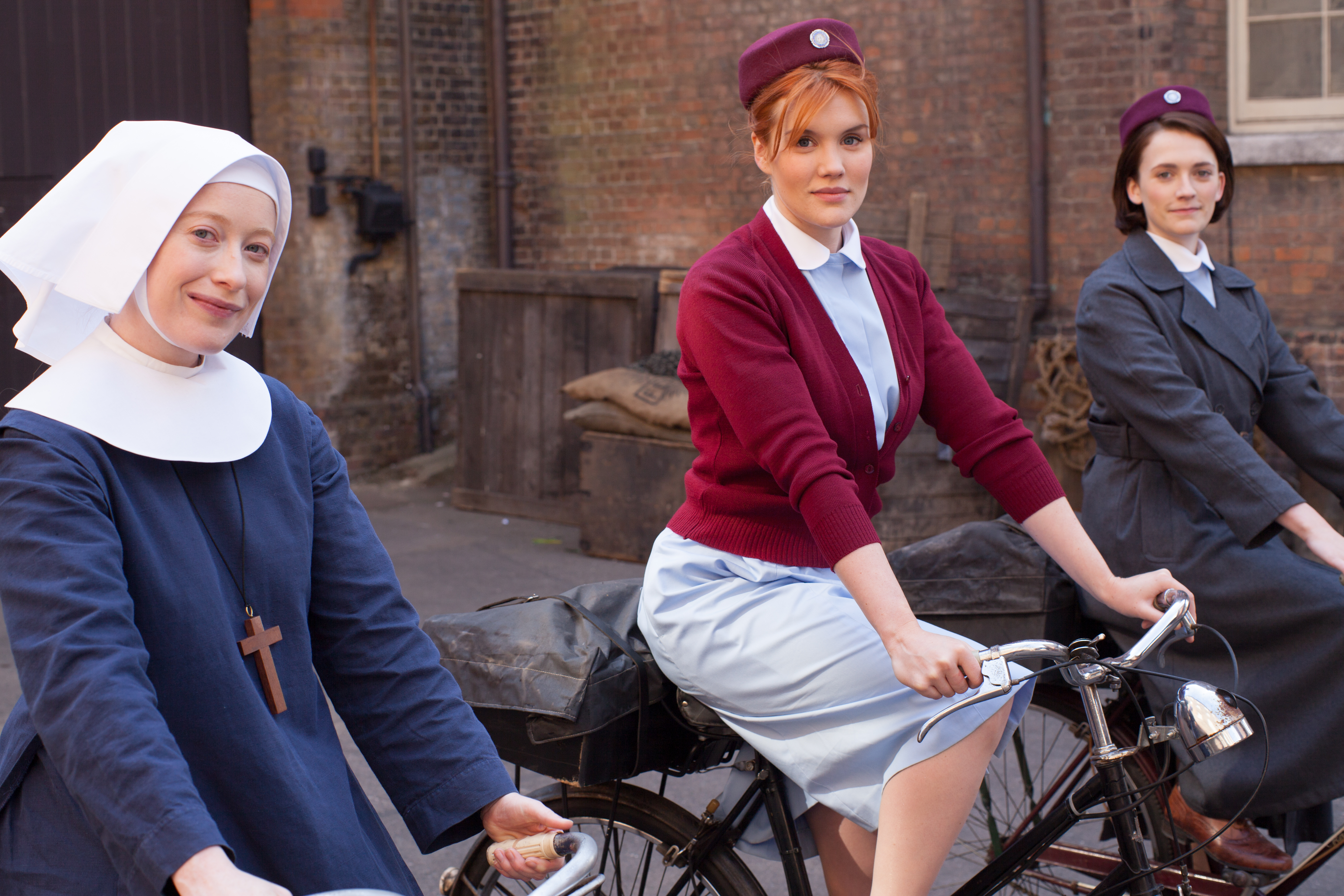 As they say in England, this week’s episode is chockablock with everything we’ve come to expect from Call the Midwife.  In fact, it features a virtual Poplar baby boom with ten children being delivered by our midwives in one day!  Some of the characters who have been in the background for a few weeks (or more) were given the spotlight. And while one Nonnatus resident has her worth validated another sees her “perfect” life crumble before her eyes.

There is a definite focus on the worth of women in this installment. We encounter women who sell their bodies cheaply, a father who values a son over a daughter and women who lose purpose and are expected to fade into the background after a war, marriage or even when they’ve advanced in age.

There’s so much to get to so let’s begin with the plight of single mother-to-be, Bridget Cole (Holli Dempsey). Miss Cole is a young prostitute who comes to the clinic to register for delivery. Sister Winfred, being her first contact, goes to the brothel for a home visit. While the sister doesn’t shame Bridget for her profession, she does question the appropriateness of such an establishment for raising a child. Bridget sincerely asserts the women are her family and her child will be loved. She demonstrates just such a bond by looking after Dora (Eileen Davies), a prostitute past her prime who is clearly suffering from syphilis. Dora won’t see a doctor for fear she’ll be sent to the hospital.

Shortly after Sister Winifred’s eye-opening visit, Dr. Turner asks her to accompany him to see Bridget. Her blood tests reveal she has syphilis as well which puts her and her unborn child’s health in jeopardy. Miss Cole is transferred to the maternity home where she will receive a series of penicillin injections to fight the infection. Once there Bridget tells Sister Winifred that she planned to abort the pregnancy but couldn’t do it in the end. She wants to give her baby the love she never had growing up. Now she fears her child will be diseased.

Sister Winifred takes Bridget’s plight to heart. She consults Sgt. Noakes about the number of prostitutes in Poplar which he estimates to be 600-700. (How big is this neighborhood?!) She boldly takes to the streets with the officer in tow trying to disseminate information about the importance of using sheaths. But the ladies of the night are having none of it, particularly not from a woman who will never have a need for condoms herself. As one who has tried this tactic before, Shelagh Turner told Winifred the clients won’t wear them because it’s like “going for a paddle with your socks on.” 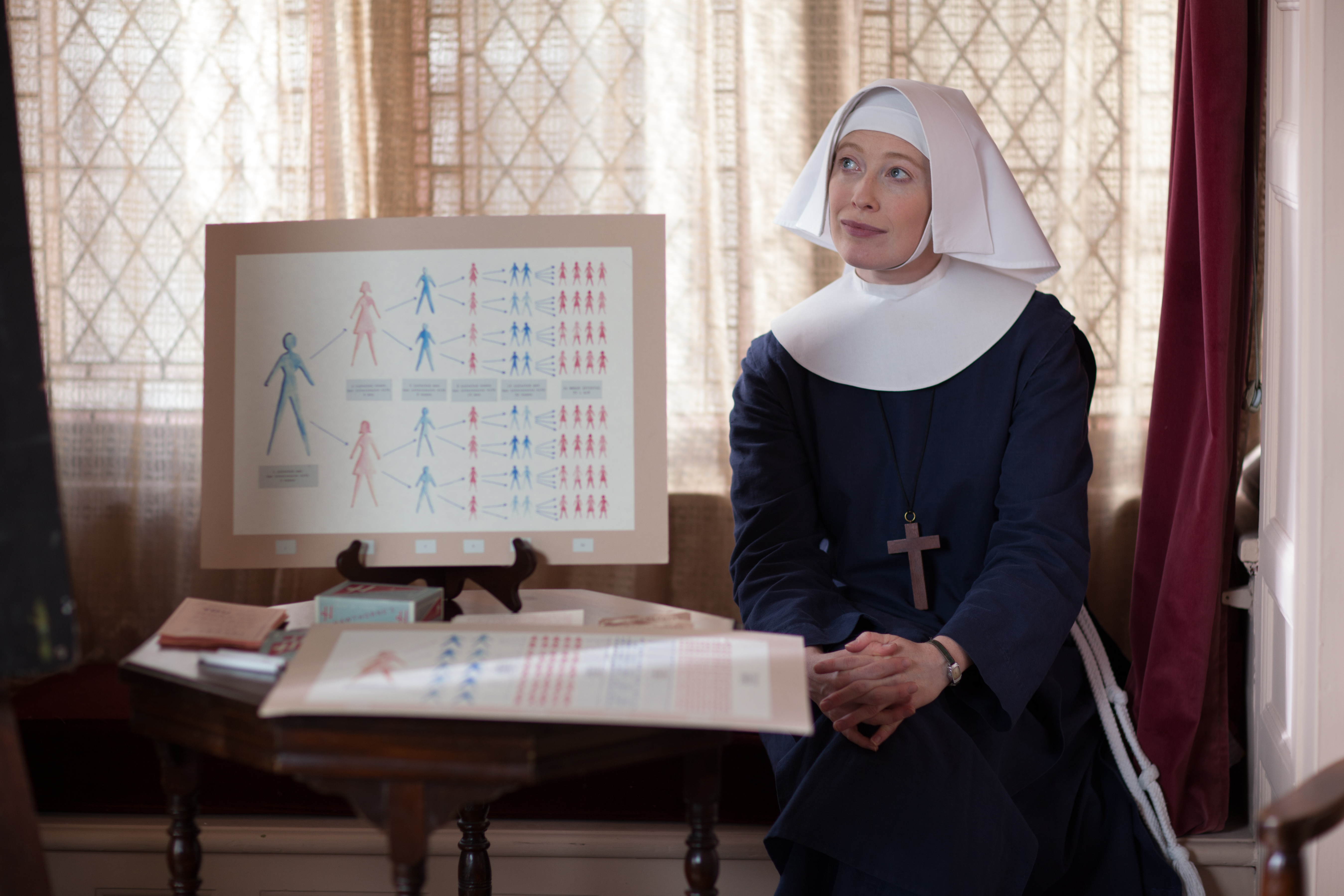 In the meantime one of the other prostitutes, perhaps the madam, comes by the maternity hospital to sneak Bridget out. She’s the only one who can control addled old Dora. Never mind she hasn’t finished her treatment yet- this is obviously more important. Once back at the brothel, Bridget gets Dora settled down and inevitably her water breaks.

Sister Winifred and Nurse Crane attend to her and find she’s too far along to be moved to the hospital so the delivery must take place there. Bridget has a daughter and all appears well initially though the baby’s condition takes a dip before stabilizing. Bridget is very grateful to Sister Winifred in particular so the nun asks if she will help stop what happened to her from happening to the other women. Later we see Sister Winifred teaching a safe sex class at the brothel with Bridget and the baby by her side.

After many years of trying, Susan Robbins (Claudie Blakley) is expecting her first child. However, the impending arrival is not a completely joyful experience because her husband Frank (George Russo) is unrealistically expecting the baby to be a boy. He owns his own rope and cable company and wants a son to carry on the business. Susan is preoccupied with worry and reveals to Nurse Gilbert that she fears Frank will leave her for a younger woman who can give him lots of sons if this baby turns out to be a girl.

When Barbara meets Mr. Robbins in the street she learns why having a son is so important to him. He lost his father and both his brothers in the World Wars and promised to keep the family name and business going. Barbara tries to introduce the idea that the baby could be a girl, but he’s having none of it. So of course, when a daughter is born to the Robbins, it is not welcome news to the new father. His wife begs him to look at their child as she is taken to the hospital for a retained placenta but he ignores her. Rebukes from an upset and very tired Nurse Gilbert do no good and it isn’t until Dr. Turner has a man-to-man with Frank at his workshop that he finally sees reason. The doctor speaks about being proud of all their children and how the world is changing so fast that by the time his daughter is grown she could be running things.

That night when the baby stirs at their bedside, Mr. Robbins picks up his daughter, takes her down the street to his factory and shows her the legacy her grandfather built. 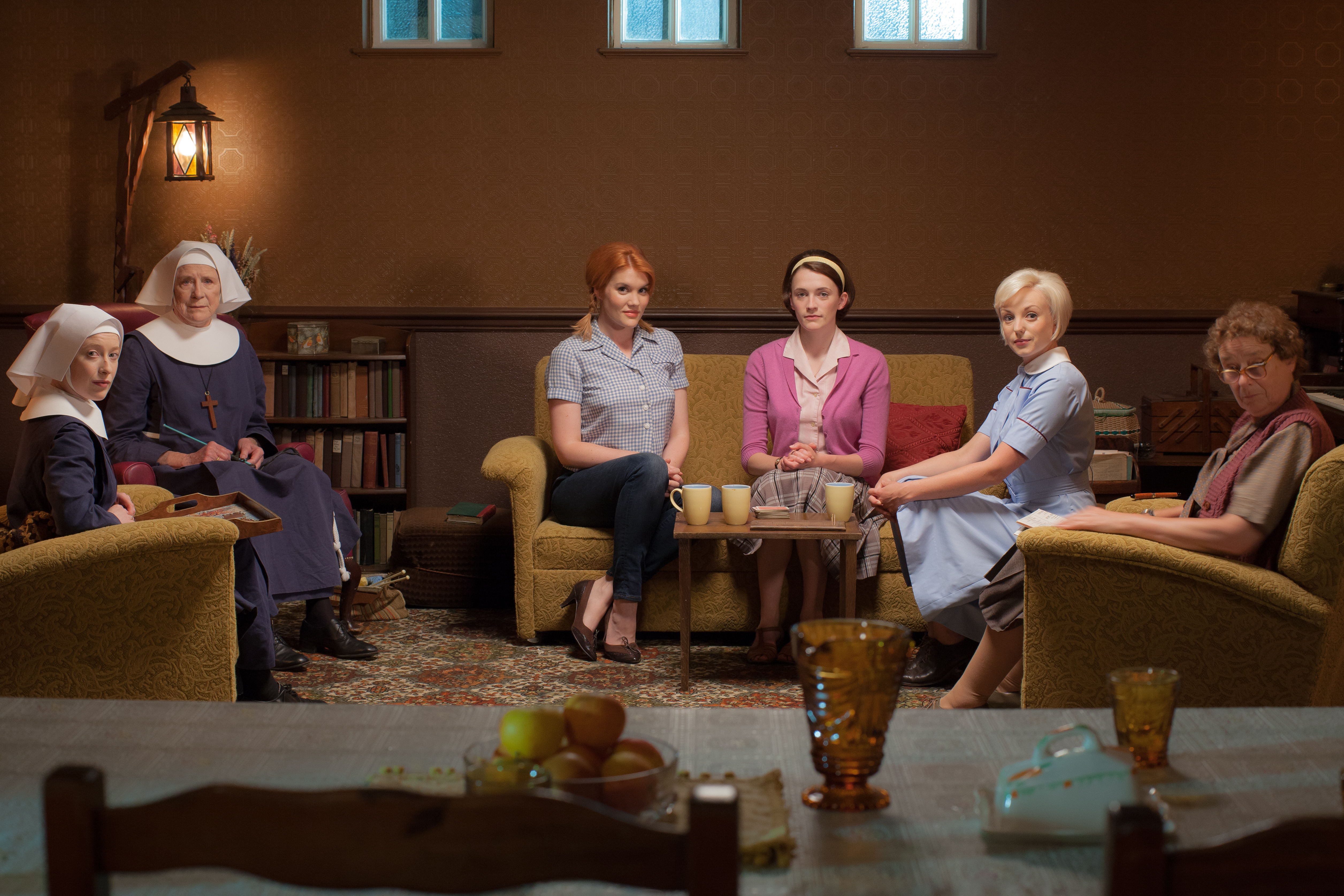 In less happy news, Trixie Franklin’s world is coming down around her. Her drinking has become even more pronounced. Anytime she is stressed, she finds herself needing a “brightener.” Barbara has even teases that she and Patsy try to guess what time Trixie’s bar will open each evening. It’s just in fun, but Trixie is stung by the comment.

When she and her finance Tom learn from the Bishop that he has plans to move Tom to a “challenging” parish in Newcastle in the next year, Trixie chimes in that she had been hoping for a more rural area to raise their family. Tom lectures her on speaking out of turn in front of his boss. He explains that he is committed to going where he is needed most and that when she marries him she marries the Church as well. In a heartbreaking question to which he already knows the answer, Tom asks Trixie if she’s ever thought about whether this lifestyle would suit her.

This situation sets Trixie on course for a drinking binge which causes her to black out. If that isn’t bad enough, Nurse Franklin is on-call and desperately needed on several occasions that evening. Sister Julienne discovers Trixie passed out in her room, but covers for her with the rest of the staff saying she’s under the weather.  The next day, Trixie apologizes to Sister Julienne and reveals not only the falling out she had with Tom but that her father had a drinking problem also. After some soul-searching, Trixie breaks off her engagement to Tom telling him she can’t live up to his (or the Church’s) expectations.

And finally, two women find renewed confidence in their abilities in one emergency delivery. A woman in labor comes to the convent door desperately looking for a midwife. Seeing as Trixie is passed out upstairs, Sister Monica Joan is the only one available. The distressed woman, Eileen Bowe (Emma Hartley-Miller) dismisses the elderly nun’s ability to help her just as Sister Monica Joan herself has been doubting her usefulness lately. When she learns Eileen’s waters were an odd color, Monica Joan knows the situation is serious and walks the laboring mother to the maternity hospital in the pouring rain.

Once the soaked women arrive, Mrs. Turner realizes there is no time to wait for her husband to return. She springs into action and with Monica Joan’s assistance; these women (who are technically no longer midwives) deliver a healthy baby girl. Eileen is so appreciative that she names the child Monica after the woman who kept her head during the emergency and helped bring her baby into the world safely. Sister MJ couldn’t have been more touched, making it one of the sweetest moments of the episode.

So has Trixie hit bottom or does she have further to fall? Sister Winifred and Nurse Gilbert held center stage this episode. Do you feel you know them better? And hurrah, according to the preview for next week, Cynthia returns home to Poplar! We’re at the midway point. How is series four shaping up in your opinion? Let the chatting commence!