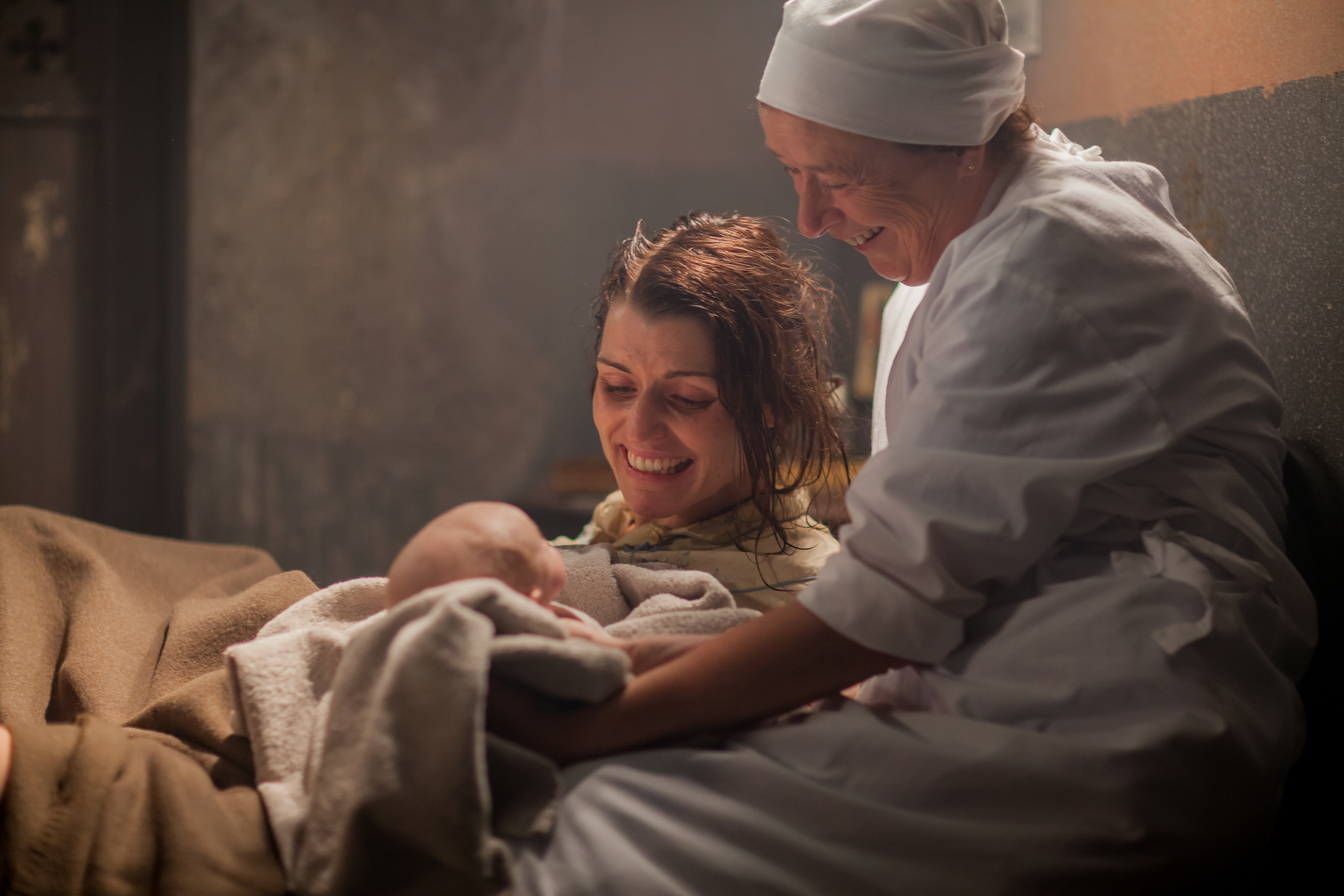 As tonight’s episode begins, we are reminded that the sixties have well and truly arrived in Poplar. The threat of a nuclear attack is a very real fear and handyman Fred (Cliff Parisi) is leading up the local civil defense corps. His job is to train the other volunteers about emergency preparedness. He’s such a community-minded fellow, our Fred.

Other things that have arrived in the neighborhood recently are a rat infestation and an outbreak of dysentery, the latter being a more immediate concern to Dr. Turner and the midwives. Shelagh Turner even puts her exceptional powers of detection to work in an attempt to locate the source of the infection.

And finally, Poplar’s Rose Queen festival is fast approaching. Curate Tom’s boss has asked him to take over the planning of the event which means Trixie gets her first official church function to organize.  Trixie is more than happy to oblige and recruits her fellow midwives to assist. Subsequently, poor Barbara finds herself chained to the sewing machine making parade banners.

Our main stories of the week, however, focus on two expectant mothers in very different circumstances. Delores McEvoy (Siobhan O’Kelly) has come to the Nonnatus clinic to sign up for a hospital delivery and ends up getting forced into an exam with Nurse Crane. It is quite evident that Mrs. McEvoy is embarrassed about her appearance and state of uncleanliness. Yet she will not accept the carbolic soap that is being passed out because Mrs. Turner has indicated that it is for those most in need and Delores is a proud woman who wants to hide her circumstances.

When the time comes for a home visit, Nurse Crane finds Delores has provided a false address and becomes even more concerned about her patient’s health. We learn that the mother and her two young children are basically sheltering in a slum called the Bullthorpe Women’s Hostel while her husband Daniel (Jeremiah O’Connor) lives apart from them and tries to make enough money to get their own place. The job he was promised has fallen through and the landlords refuse to rent to the Irish. When Delores goes into labor, Trixie and Nurse Crane are called out to assist in her delivery. Upon closer inspection they find that Mrs. McEvoy also has dysentery and is having a difficult time laboring. When the baby girl is finally born and Mr. McEvoy is reunited with the family, he vows to improve their situation despite the problems they’ve encountered in London.

Nurse Crane is appalled at the conditions and admonishes Dr. Turner to do everything in his power to get hostels like Bullthorpe closed down. In the meantime, her crusading must wait as she and Trixie are placed in quarantine together to make sure they haven’t contracted dysentery from Mrs. McEvoy. Once the danger has passed, Sister Julienne sends Nurse Crane along with Dr. Turner to petition the medical officer, Mr. Lancing (Thomas Arnold) to address the conditions of these boarding houses. At first he claims his hands are tied by the housing shortage in London, but Nurse Crane in her inimitable fashion shames the official into arranging for an inspection of the hostel.

The lodgings are found uninhabitable due to roach infestations and dysentery infection and a fogging is ordered to resolve the offending conditions. This still doesn’t satisfy Nurse Crane so Lancing uses his influence to get the entire McEvoy family rehoused. There’s no stopping Phyllis Crane when she’s got a bee in her bonnet.

The other main plotline introduces us to a couple in a much more stable financial situation than the McEvoys but a scandalous secret is about to tear them apart all the same. Tony (Richard Fleeshman) and Marie Amos (Cara Theobold) are expecting their first child any day now. Marie, the reigning Poplar Rose Queen, is over the moon about their new baby and her handsome husband who likes a tidy parlor, keeps his clothes clean even though he’s an auto mechanic and knows something about fine art. A bit cliché, but you know where they’re going with this, right?

When Tony is entrapped by the police (I’m so disappointed in Sgt. Noakes) and arrested for performing a gross indecent act in a men’s public toilet, the young man’s secret is exposed and Marie’s world is blown apart. She tells Patsy she can’t believe her husband is one of “them.”

Things only get worse for Tony. Marie’s father fires him from the garage and now he must stand trial for his crime. He approaches Dr. Turner to be his character witness and Patrick agrees. Tony also confides that he is very unhappy because he’s not able to have what he really wants in life and he might just be better off dead. Dr. Turner tells him he mustn’t think that way and to focus on his future.

At court Tony pleads guilty and Dr. Turner vouches for his good character. He suggests treatment be prescribed to help change Mr. Amos’ illegal predilections (shades of The Imitation Game). The judge begrudgingly agrees to issue a probation order with the condition of monitored hormone treatment as part of the deal. Dr. Turner meets with couple to go over their options and recommends estrogen tablets as the least bad alternative. This treatment will cause impotence, breast tissue growth and loss of body hair. It is a female hormone after all.  Marie is relieved that the worst seems to be behind them and things can get back to normal. But she couldn’t be more wrong.

Tony’s trial is reported in the local paper and there is some resulting backlash from small-minded people in the neighborhood.  Some don’t think Marie should be allowed to participate in the Rose Queen festival. Tony is kicked out of the civil defense corps for having a criminal record and their house in vandalized with hateful graffiti. Everything comes to a head when Tony offers to leave to make things easier for his wife. Marie insists he be a man, face up to his responsibilities and take his punishment i.e. the prescribed medication. When Marie goes into labor at home alone, predictably it is Patsy, our newly revealed lesbian, who is called to help with the delivery. Marie’s father, Arthur (Colin Mace) happens to come along just in time to see his granddaughter being born.

In the meantime, Tony has received his first dose of hormones and is so distraught he attempts suicide by trying to gas himself inside his father-in-law’s garage. When Arthur returns home he notices something awry. He rescues Tony from the car, embraces him and takes him home to meet his baby daughter.

In the end, Marie does take part in the Rose Queen festival and when the crowd goes awkwardly silent when her name is announced, it is Tony who stands and starts the applause for his wife, a sign that he will do his best to be a supportive husband and father.

It appears with Patsy’s story and now Tony’s, as well as the religious debate held around the Nonnatus dinner table, attitudes towards homosexuality in the early 60’s will be a recurring topic this series. While Tony makes a decision to stick by his family, we know that he will be living his life as society (and his wife) dictates and never be able to be true to himself. Not for the foreseeable future anyhow.

So, how did this episode play out for you? Is Nurse Crane’s observation about Trixie’s drinking more than a random comment? Will Shelagh’s discovery of the mobile kitchen link to the dysentery outbreak lead to a health inspector’s job? Will Sister Monica Joan’s insistence on sparing the rats make her the Pied Piper of Poplar? Any and all CTM comments are welcome!