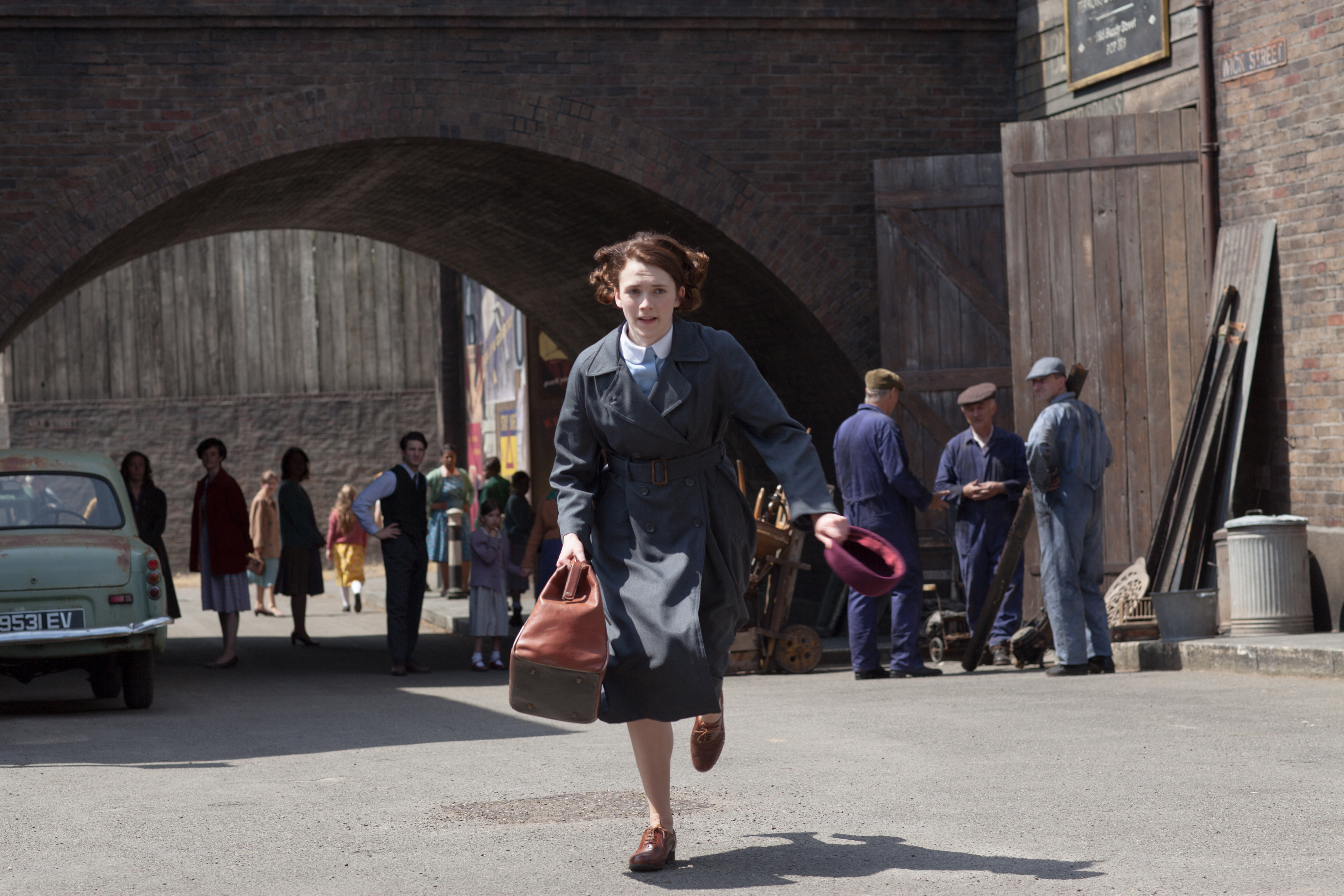 All right, this episode did get my tears flowing. I mean how could I not grab for the tissues? Barbara and Patsy were crying; new Poplar parents, the Bissettes, were crying; for heaven’s sake, Sister Julienne was crying. You’d have to have a heart of stone not to well up a bit. I believe one of the main reasons there was so much blubbering was because this episode had a theme of doubt and the melancholy of what might have been.

But let’s take care of old business first, shall we? Sister Evangelina has seen a doctor and discovered that her pain is being caused by fibroids, more a nuisance than anything life threatening. Still it has been recommended she get a hysterectomy to eliminate her discomfort.

As a result, yet another midwife has been requested to fill in temporarily at Nonnatus House. This time it is an older, much more experienced nurse named Phyllis Crane (Linda Bassett). On the plus side she is efficient and professional. Unfortunately she is quite outspoken regarding just about everything from her vegetarian habits to Sister Evangelina’s administrative methods even suggesting she replace the log book with a Rolodex. What with the Sister being rather plain-spoken herself, you can imagine that Evangelina is none too pleased with her replacement and decides to postpone her surgery for the time being. 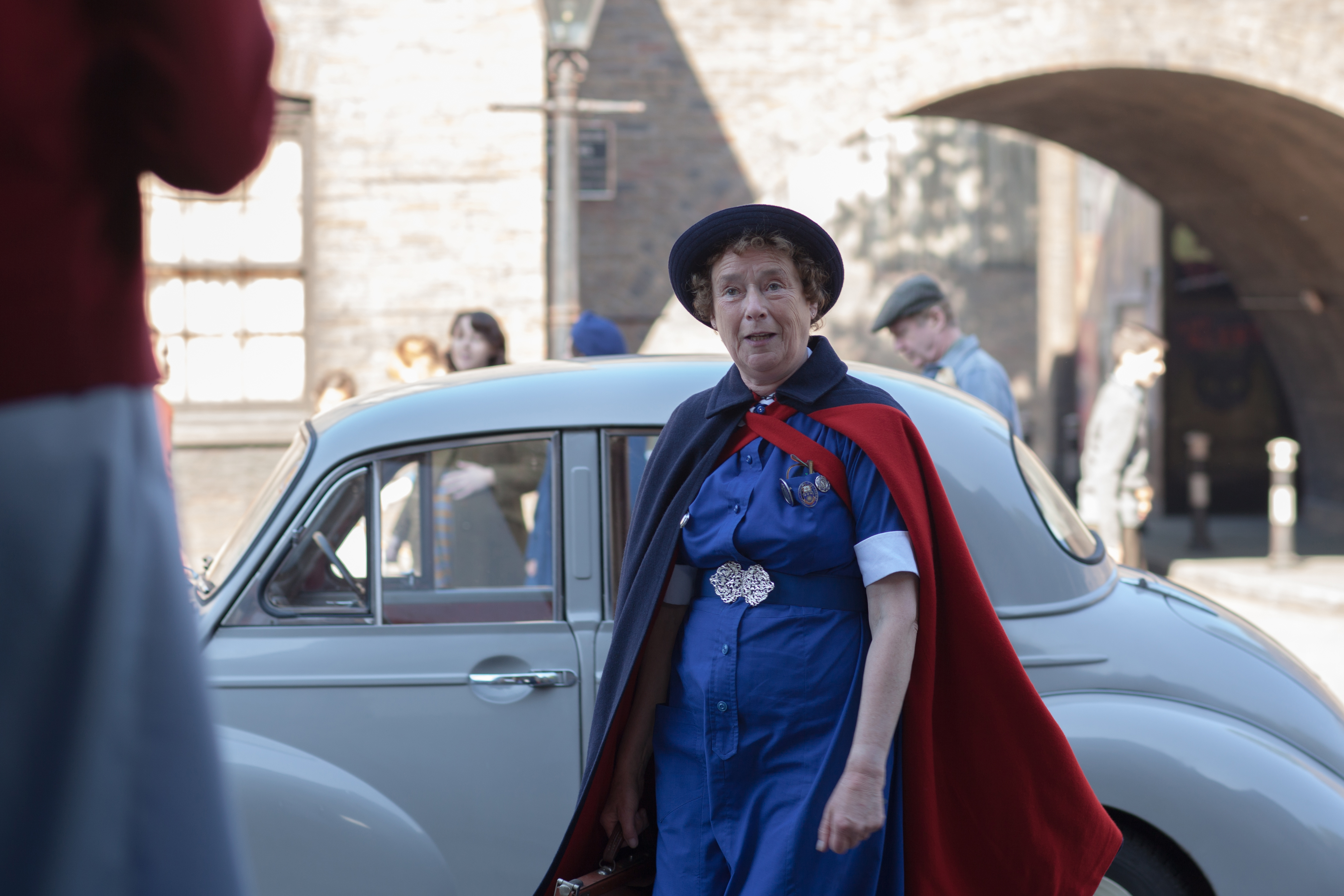 Seeing as Chummy’s away running the mothers and babies home, Patsy has stepped up to take over her pack mother duties with the Poplar Cub Scouts. Fire safety turns out to be the theme of their district Jamboree display when most of the boys burn themselves trying to build a campfire. Patsy engages the help of a fellow nurse from her days at the London, Delia Busby (Kate Lamb) to help with the boys’ first aid training.

Another continuing story is the engagement of Nurse Franklin and curate Tom Hereward. As predicted last week, all is not well in paradise. Trixie has been pricing caterers and photographers, choosing china patterns and making up a rather extensive guest list of sixty-three people - so extravagant! Tom apparently was expecting a more modest affair. They do live in Poplar after all and it might appear unseemly for a man of the cloth to have an ostentatious wedding. So far apart are they philosophically at the moment that Tom stomps off after telling Trixie that he asked her to be his wife, not his professional fiancée! More on our troubled lovebirds later…

And now on to the episode’s main plotlines – Abigail Bissette (Cherrelle Skeete) and her husband Terence (Kadiff Kirwin) have moved to London from the West Indies and are eagerly awaiting the birth of their first child. She has even bought a new washing machine with her government maternity grant which some of the other mothers in the neighborhood seem to resent. But Mrs. Bissette is giddy with impending motherhood and doesn’t seem to notice their disapproval.

When Barbara visits her at home she finds the mother-to-be’s blood pressure elevated. Abigail mentions how quiet the baby has gone lately and even after the administration of a cold drink, the baby makes no movement nor can Barbara locate the heartbeat. Unable to contact Doctor Turner, the young midwife calls for an ambulance.  Once at the hospital, the heartbeat is found and the doctor admits Abigail for overnight observation on bedrest. 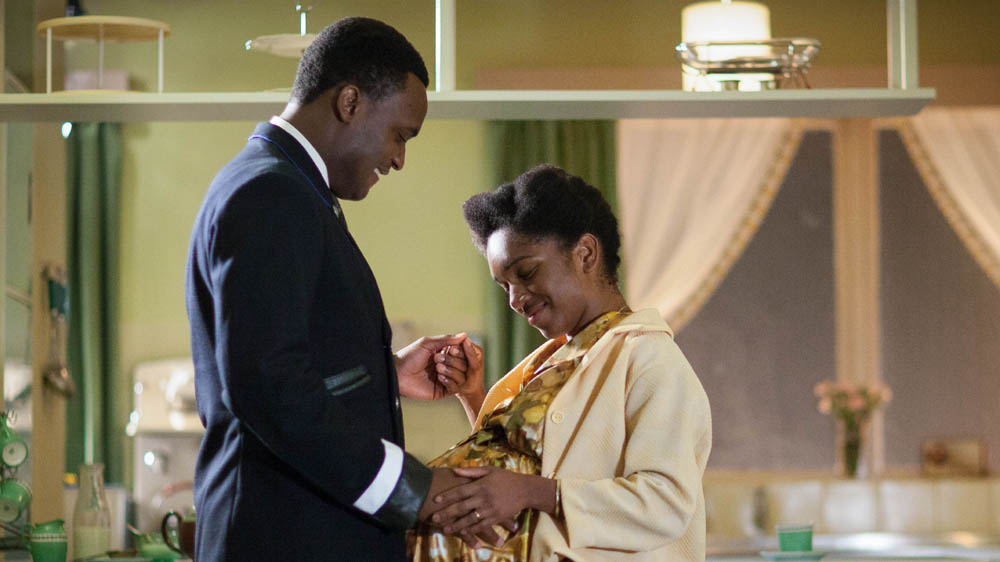 Unfortunately, Mrs. Bissette is not an obedient patient and goes wandering the halls in search of the bathroom when she comes upon an apparent self-administered abortion gone wrong. This disturbs her so much she runs away from the hospital and decides she will have a home birth instead. When Abigail goes into labor, Patsy and Barbara are sent to the Bissette home for what should be a routine delivery. Alas, when the child is born it is apparent the infant girl has been dead for several days. Besides being devastating to the parents, Barbara and Patsy are quite shaken too as neither one has ever delivered a stillborn child before. It is particularly tough on Barbara since she had thought she detected the baby’s heartbeat shortly before the birth.

Reinforcements are called in with Nurse Crane arriving first and uncharacteristically comforting Barbara before going about her duties. Sister Evangelina comes shortly after and is annoyed to find Nurse Crane already there with the situation in hand.  Patsy is trying to help Abigail deliver the placenta; however, it seems to be blocked in the cervix. Dr. Turner is called in and after his examination, he discovers she was actually carrying twins and the second baby is on its way. This baby, a boy, is born alive and healthy. So Barbara, who doubted her midwifery skills, really did hear a heartbeat, the one of the live twin. As another outcome of this harrowing night, Sister Evangelina and Nurse Crane seem to have come to a truce and the nun can now hand over her responsibilities and commence her sick leave. And finally, when Patsy seeks solace in Nurse Busby after a confidence-shaking evening, we discover the two women are more than just friends.

The other story of the night featured steady, always faithful Sister Julienne. After receiving a call from the Reverend Mother, she learns that a local benefactor would like to speak to her about giving money to Nonnatus House. On the way to their meeting, Julienne is a bit mysterious when she answers Sister Winifred’s questions about the potential donor with a quote from her postulant mistress, “When a prayer is answered, don’t send a question back.”

It turns out wealthy Mr. Charles Newgarden (Nicholas Farrell) was an old beau of Sister Julienne’s (back when her name was Louise). She apparently stood him up one night when they’d planned to see a Chaplin film at the cinema and instead left him a letter explaining she was joining the Church. Now thirty years later Sister Julienne finds that Charles is dying from a failing heart and wishes to include her life’s work in his will. The reunion is very emotional for both of them and Sister Julienne virtually bolts from the house before their business can be completed.

It seems that Sister Julienne may not have ever gotten entirely over this man. She did keep a photograph of him in one of her devotion books and her reaction to seeing him again is not what we’re used to seeing from the ever wise and serene nun. When invited back to the Newgarden house, Charles and Julienne come to the conclusion that they both found happiness in other ways. They then recreate the date they missed all those years ago by holding hands as they watch Chaplin’s classic City Lights. 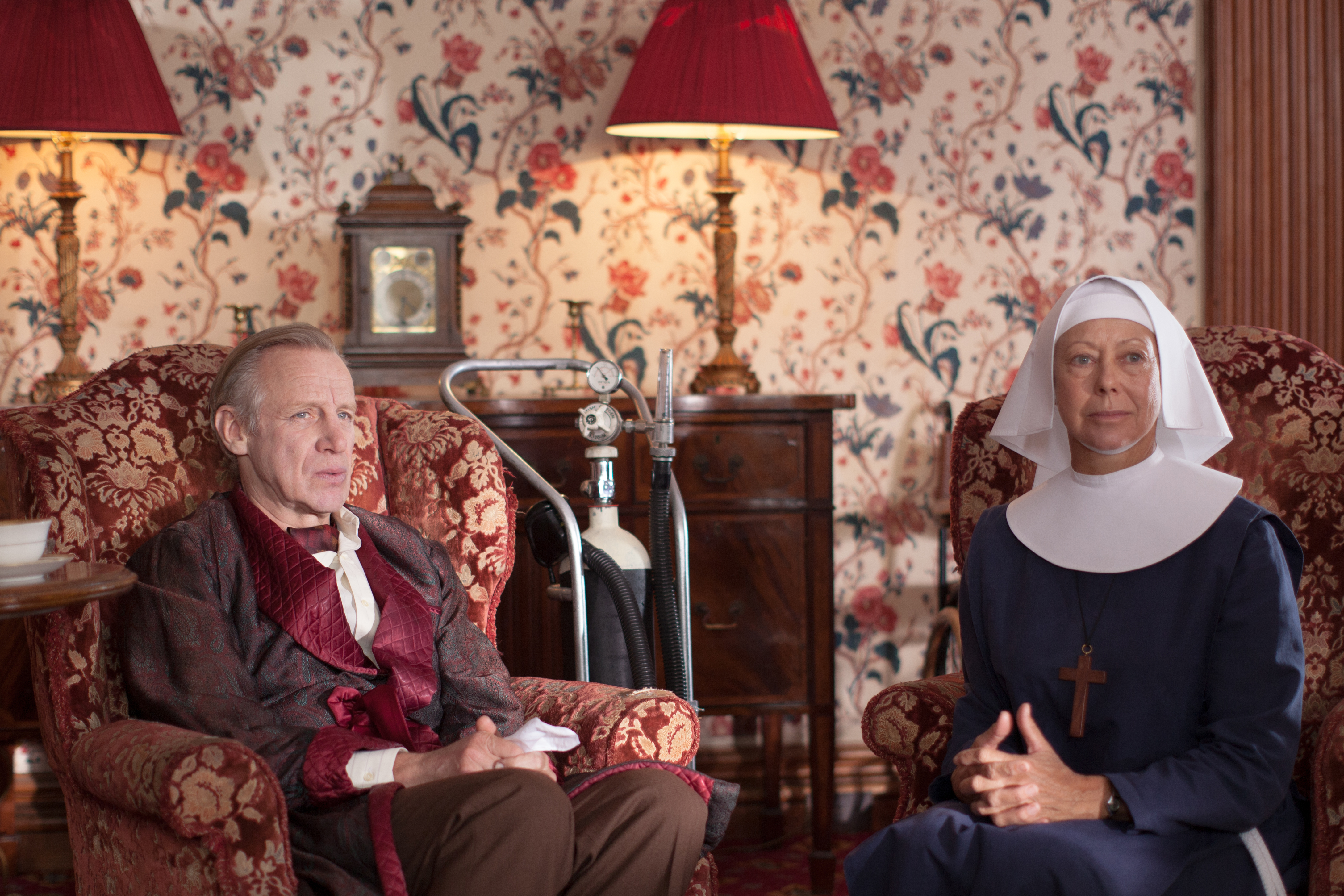 Sadly, Mr. Newgarden dies shortly after that visit. His legacy will allow for the repairs needed to keep Nonnatus House up and running. Sister Julienne turns to the only person she feels could understand her feelings about what might have been, Shelagh Turner. The former nun reassures her friend that everything that happened was meant to be, yet in her grief, Sister Julienne doesn’t look totally convinced.

And finally back to the Bissettes who find they can’t allow themselves to be happy about the birth of their son because they lost their daughter. Abigail in particular feels guilty for not knowing her baby was in trouble or even that she was carrying twins. Tom comes to talk to the couple and laments that there is no ritual in the Church for the burial of a stillborn.  So he comes up with something himself - a naming ceremony as a way of recognizing the Bissettes’ daughter, April. Also Tom blesses the booties Sisters Monica Joan and Winifred helped Abigail knit. One will be buried with April and one will stay with her twin brother, Terence Jr.

After the ceremony, Trixie makes up with Tom by apologizing for losing sight of the bigger picture. They end up having a small intimate engagement party at the convent with their closest friends who just so happen to be Trixie’s co-workers.

One of my favorite moments of this episode was so small it was barely a scene, but poignant all the same.  Sister Monica Joan, up before anyone else in the morning, is there to see Sister Evangelina off for her surgery even though she tries to slip away unnoticed. You know Evangelina appreciates the gesture even though she pretends to be annoyed.

So how was this episode for you? Did your heart break for the Bissettes who had to undergo such powerfully conflicting emotions? Did you grieve for Sister Julienne’s lost love? Did you feel for the midwives who experienced their first of probably many tragic deliveries? Please share your opinions about this tear-filled episode in the comments below!