The gang's all here for "Call the Midwife" Season 4! (Photo: Courtesy of Laurence Cendrowicz/© Neal Street Productions)
Welcome back to another series of Call the Midwife! The time has come to return to Poplar to share in the joys and sorrows of this working class community and cheer on their most dedicated altruists, the nuns and nurses of Nonnatus House.

It’s 1960 and just as we’ve come to expect, change is a constant at the convent, especially when it comes to the staffing situation. To refresh your memory, Nurse Miller (Bryony Hannah) has left Poplar for Chichester where she will undergo her postulate training to become a nun. Sister Julienne (Jenny Agutter) has reassured Sister Monica Joan (Judy Parfitt) – and the viewers – that Cynthia will return.

Alas, Chummy (Miranda Hart) has taken on a temporary position as acting matron at a local mothers’ and babies’ home leading us to believe her appearances this series will be scarce. Her husband Peter (Ben Caplan) finally got his promotion to sergeant and will be staying at Nonnatus House whenever he’s scheduled for night duty.  Remember to put the seat down, Sgt. Noakes!

To fill the gaps a new midwife, Barbara Gilbert (Charlotte Ritchie), has been brought in from Liverpool. Young and eager to make a good impression, this vicar’s daughter has been placed under the watchful and critical eye of Sister Evangelina (Pam Ferris). Barbara seems to be a bit of a klutz and a little naïve as well. When Nurses Trixie Franklin (Helen George) and Patsy Mount (Emerald Fennell) welcome her to fold with some celebratory “fortified wine”, their hospitality backfires leading to a horrible night of Nurse Gilbert driving the porcelain bus, as it were.

However, Barbara soon finds her bearings while working with an anxious mother. Mrs. Wimbish (Olivia Llewellyn) has lost three babies within their first six months and has set her hopes on following the advice of American sensation, Dr. Spock, to keep this one alive. When her baby daughter is delivered prematurely and is taken away to a special unit at another hospital, the mother is concerned that she won’t be getting the breastmilk that could be vital to her health and survival. Barbara convinces Sister Evangelina to allow her to help Mr. Wimbish express her milk and then offers to deliver it to the hospital herself several times a day. Nurse Gilbert’s hard work and commitment to her patient finally earns her Sister Evangelina’s respect. 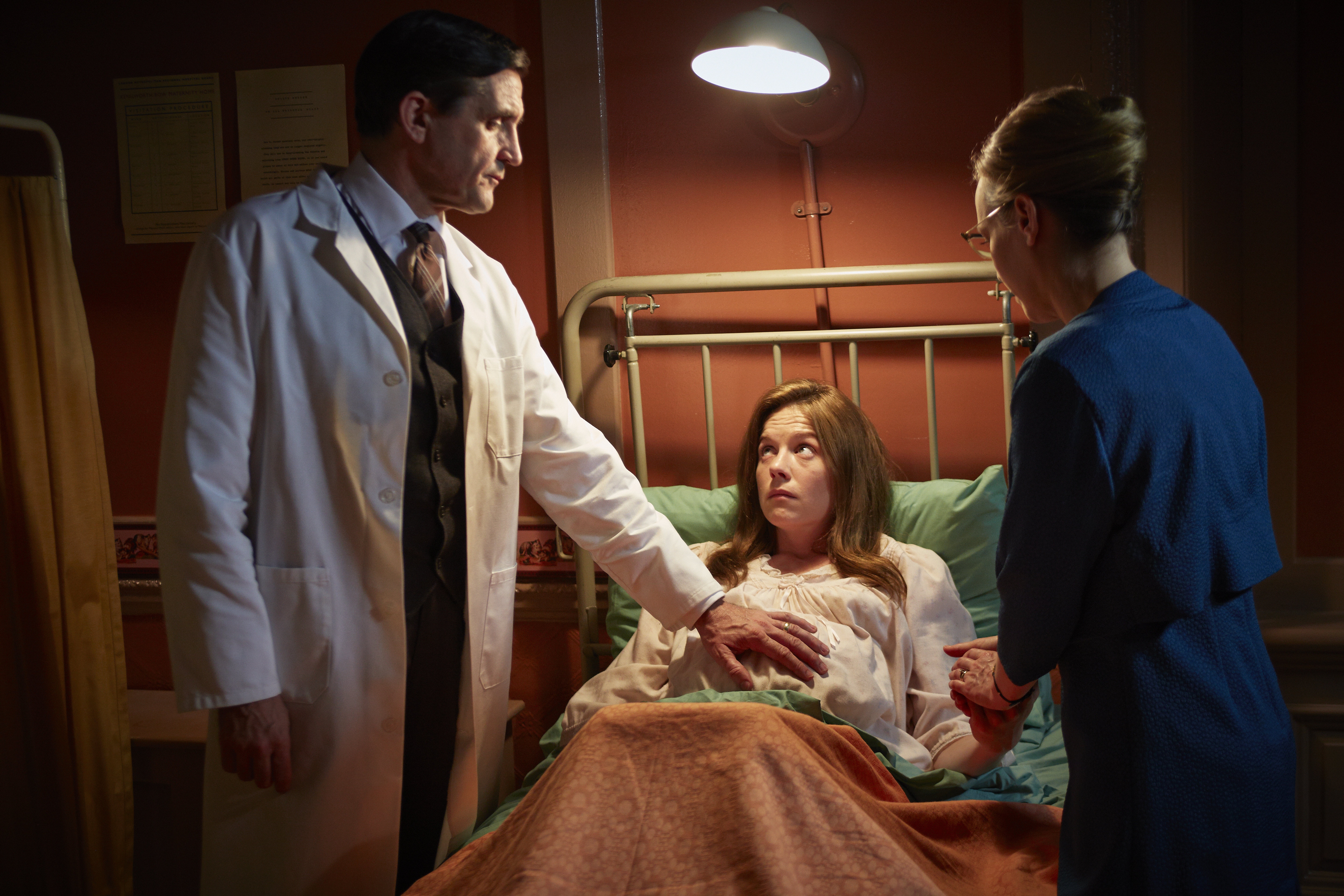 But the most heart wrenching storyline of this first episode belongs to Trixie. When ten year old Gary Teeman (Alfie Davis) brings his baby sister into the clinic to pick up milk tokens for the family, Mrs. Turner (Laura Main) asks him to stay to see the doctor since the baby appears to have impetigo. Shelagh needs to go off to teach a class so Trixie steps in and takes an interest in the boy who has obviously been living in squalor and has been left to care for his siblings. When he leaves the clinic without the baby being seen by the doctor, Trixie makes it her mission to locate Gary and his family. She enlists the help of her curate boyfriend, Tom (Jack Ashton), who also fails to find any trace of the children or their mother.

When Gary resorts to shoplifting biscuits to feed his sisters, he is brought to Sgt. Noakes by the shopkeeper and it is then that the children’s horrendous living conditions and level of neglect are finally revealed. Their mother goes away for days at a time and the flat is filthy.  Baby Coral is dehydrated and has worn a soiled diaper for so long she might need skin grafts at the hospital. 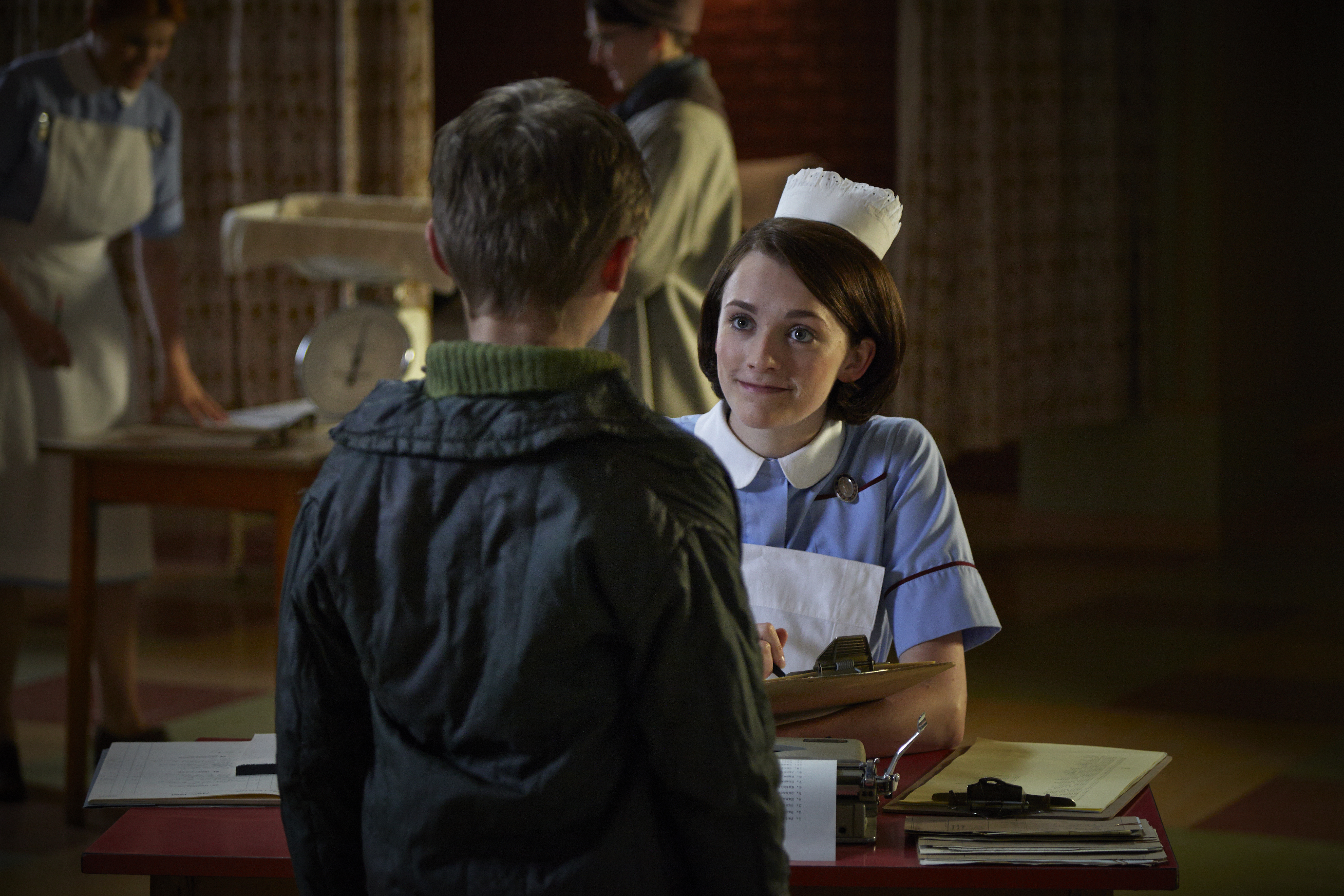 The three remaining children are taken in to be cleaned up by the midwives seeing as they are infested with fleas and lice. Gary implores that the women not shave their heads because people will think they are poor and Trixie agrees they can take the time to do it by hand.

The children stay at Nonnatus House for the night until a foster home can be arranged for Gary and his two other sisters. As they take their leave, Trixie can’t bring herself to say goodbye. She is still scarred by the childhood trauma of dealing with her shell-shocked father’s break-downs and feeling the need to pretend everything was fine much like Gary’s tendency to put up a brave front.

Trixie does get a moment of happiness when Tom proposes to her in a very sweet and heartfelt way. While I don’t doubt the young couple’s love for one another, I just can’t see Trixie being a vicar’s wife down the road, can you?

As for the hankie count, I have to say, I didn’t shed a tear during this episode which is quite unusual for me. Of course, I’m concerned about Sister Evangelina and her health crisis which she is finally acknowledging. I was touched most of all by Monica Joan’s concern for her sister in Christ as she implored her to see a doctor. 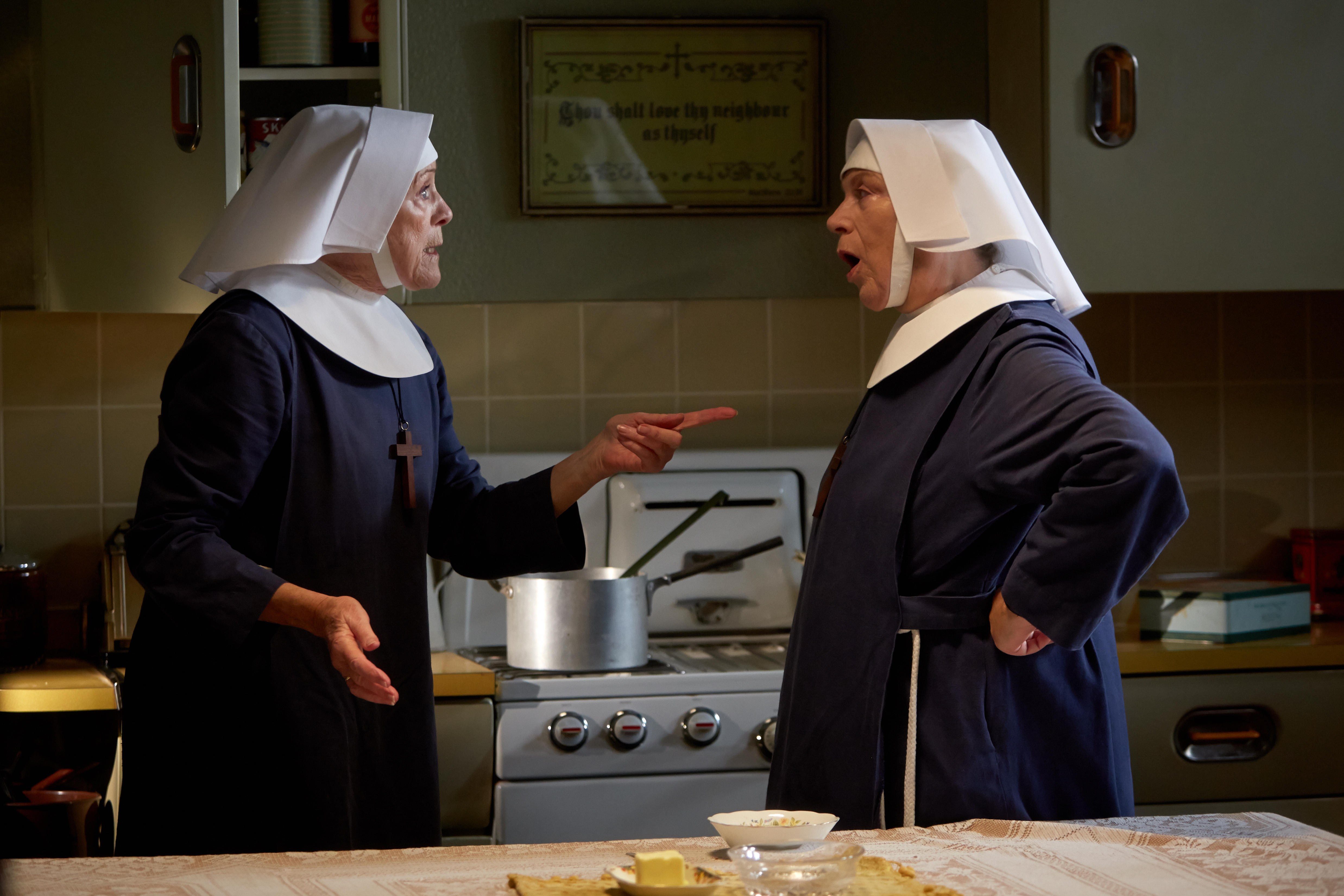 I was shocked and saddened by the Teeman family story and sorry that such a young boy had to shoulder responsibilities so far beyond his years. At the end, old Jenny (Vanessa Redgrave) told us that Baby Coral was adopted in England, but the others were sent to Australia under the Migrant Children’s Act. This too is tragic if you read about this policy which sent poor orphaned children to Australia and other colonies to be brought up in institutions often just as neglectful and abusive as their situations back at home.

Other questions remain yet to be answered. Is Timothy Turner (Max Macmillan) on track to follow in this father’s footsteps? He is reading articles in the Lancet after all. Will Sister Winifred (Victoria Yeates) be more than window dressing this season? When will Cynthia return and what will her new name be? Will Shelagh joining her husband full-time be too much togetherness for the Turner household? Will Sister Monica Joan continue to deliver the best lines of the night? “Put down the bananas. They are superfluous to the situation.” You can’t beat that!

Now it’s your turn. Please share your hopes and thoughts about the Series 4 in the comments section!