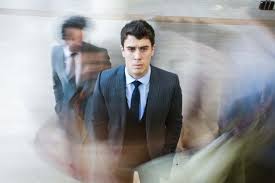 The wonderful weirdness that is "Black Mirror" (Photo: Channel 4/Netflix)
If you haven’t yet experienced the newest British sensation from Netflix, Black Mirror, I’m here to make a proper introduction. That and perhaps to forewarn those of you who have heard this techno-thriller series is the new Twilight Zone. Yes, both shows are anthologies of unrelated stories and characters. Both use science fiction as the apparatus for delivering messages about societal issues.

However, for fans of that groundbreaking fantasy horror series of the early 1960’s, please know there are no aliens, dream states, time travel or creepy children in Black Mirror. Instead creator Charlie Brooker speculates about what the dangerous combination of new technologies and the less wholesome side of human nature can spawn. This was post-watershed TV in the UK, not prime-time, family-friendly network fare. Many of the episodes have sexual elements, adult language and violent themes.

That being said, I was fascinated and slightly freaked out by the dystopian scenarios portrayed in these disturbing tales of admonition. Could we be that close to developing technologies that can fully activate the some of the most harmful human instincts we possess? The answer seems to be a resounding yes.

If the description thus far intrigues you, I have prepared a quick guide to all six Black Mirror episodes which can currently be found streaming on Netflix. Since the sequence you watch them in doesn’t really matter, I have ordered them from the episode that I found least compelling to the one that really blew me away.

6. The Waldo Moment (Series 2, Episode 3)/ Waldo is a rude, blue cartoon bear created by struggling comedian Jamie Salter (Daniel Rigby). Waldo’s job is to interview and humiliate politicians on a news satire program. The show’s producer Jack Napier (Jason Flemying) pushes Jamie to consent to a stunt wherein Waldo would run against local Tory candidate Liam Monroe (Tobias Menzies) in the upcoming MP election. Jamie is unsure, but when Monroe taunts Waldo in a televised debate, Jamie’s anger towards the political system channels through Waldo garnering even more support for the animated candidate.

We already know that social media and entertainment news influences public opinion to an unhealthy degree. If comedic personas like Stephen Colbert can run a virtual campaign, why wouldn’t Homer Simpson or SpongeBob be close behind? ‘The Waldo Moment’ fell flat in comparison to some of the ideas put forth in other episodes so for me it lacked the emotional impact I came to expect from this series.

5. White Bear (Series 2 Episode 2). Victoria (Lenora Crichlow) wakes up in an awful state- sitting up in chair, head aching, with a high-pitched signal and unknown image being emitted from the TV. Most concerning of all, Victoria doesn’t know who she is. As she leaves her house to find help, people won’t speak to her, but are taking pictures and video of her instead. Agitation turns to terror when a masked man gets out his car and appears to be about to shoot her right on the street in front of all these on-lookers. Victoria meets Jem (Tuppence Middleton) just in the nick of time. Jem explains that a signal coming from the nearby White Bear transmitter has turned most people into spectators. The few like them who aren’t affected are being hunted by masked assassins. Their only chance for survival is to take out the signal by destroying the transmitter.

In true Twilight Zone style, this story has an unimaginable twist at the end which reveals not only who Victoria really is but also the inhumanity of the herd mentality. While well-acted and thought provoking, this episode was too intense even for my sensibilities. It was nightmarish and bordered on sadistic.

4. The Entire History of You (Series 1 Episode 3). Meet Liam Foxwell (Toby Kebbell), a husband, father and lawyer. Like most people in his alternative reality, Liam has a “grain” or chip implanted behind his ear that records everything and allows him to review his actions at any time. After a bad appraisal at work, Liam’s day gets worse as he joins his wife Fi (Jodie Whittaker) for a dinner party with her friends. He notices a man he doesn’t know in an intimate conversation with Fi. He is introduced as Jonas (Tom Cullen) an old friend of the party guests. Jonas proceeds to make remarks throughout dinner about his sex life and Liam begins to suspect something is going on between his wife and this quite obnoxious man.

Black Mirror | The Entire History of You | Channel 4

For Liam in particular this ability to study every word and nuance of an interaction makes him prone to obsession, jealousy and rage. I could see this type of technology being offered to people in the future as an opportunity to relive fond memories or learn from our mistakes. But as in so many other scientific advances, there’s the moral question – just because we can do it, should we? And perhaps we forget or distort our memories for a very good reason.

3. The National Anthem (Series 1 Episode 1). Prime Minister Michael Callow (Rory Kinnear) is awoken one morning to a distressing state of affairs. Princess Susannah (Lydia Wilson) has been kidnapped and the very peculiar demands of her abductor have been uploaded to YouTube for the world to see. The Prime Minister must perform an illegal act live on television or the princess will be executed.

When I first watched this episode I was slightly appalled by the premise of this story – the demand of the kidnapper, the fickleness of public opinion and the cutthroat way some in the media went about covering it. On a second viewing and after watching other Black Mirror episodes since I realized I was supposed to be shocked so I could appreciate its impact a bit more. For me, there was also a ray of hope to be found in the way the public actually reacted when events finally played themselves out.

2. Fifteen Million Merits (Series 1 Episode 2). This story takes place in the most dystopian of futures so far. Apparently millions of young people have only one purpose in this society - to ride stationary bikes that generate power for the country. They earn merits commiserate with how fast and long they ride with which they can purchase food, toiletries and “entertainment opportunities”. Bing (Daniel Kaluuya) is just one of these cyclists, trudging through each day. That is until he meets Abi (Jessica Brown Finley), a new girl at the facility. He overhears her singing and convinces her to try out for ‘Hot Shot’, a Britain’s Got Talent sort of show. He gifts her fifteen million merits to pay the entrance fee in part because I’m pretty sure he fancies her, but also he wants to be part of something real.

I rank this episode so highly because it creates a world far enough from our own that it seems foreign, but is so well constructed that you can see our existing technology taking us there if we aren’t careful. Daniel Kaluuya is an actor to watch and he really carries the story as a young man longing for authenticity in his life.

1. Be Right Back (Series 2 Episode 1). Happy young couple Ash (Domhnall Gleeson) and Martha (Hayley Atwell) have just moved into their first home in the country when Ash is tragically killed in a car accident while returning the moving van. Martha is understandably devastated so a friend signs her up for a service that takes all of Ash’s e-mails and social media information to create a virtual Ash who can communicate with Martha online and by phone. Though originally outraged by this suggestion of communicating with the dead, Martha’s crushing grief finally leads her try the service and proves, for a while anyway, to be a great source of consolation.

This was my number one episode because, in my eyes, Gleeson is the next great Irish actor, obviously following in the footsteps of his father Brendan. But mainly it’s the fact that this story is about the most elemental and human of emotions. No matter how far we advance technologically, we still have to suffer the excruciating pain of grief the old fashioned way.

So, what do you reckon, are the dark cautionary tales of Black Mirror your cup of tea? If you’ve already seen this series, what did you think of Brooker’s foreboding view of our not-so-distant future? Please start the virtual discussion now!

Black Mirror Netflix Why You Should Watch