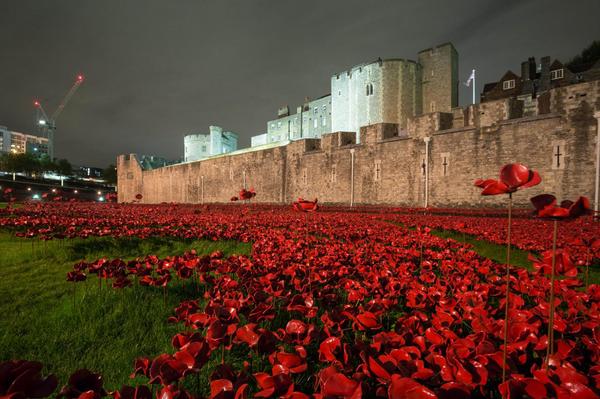 The gorgeous "Tower Poppies" installation at night. (Photo: Historic Royal Palaces/Tower of London via Twitter)
On November 11, the multi-month effort to plant a ceramic poppy within the moat of the Tower of London in honor of the hundreds of thousands of lives lost during World War I was completed.

Officially titled Blood Swept Lands and Seas of Red, the installation features hundreds of thousands of ceramic poppies – the ceremonial flower traditionally used to remember war veterans in Britain – arranged in and around the Tower moat. Known colloquially as the “Tower Poppies” this exhibit has been drawing crowds for weeks, as visitors came to admire the impressive artwork and pay their respects to those who lost their lives in combat.  Each poppy – planted by veterans, celebrities, public figures and volunteers – represents a British military fatality in World War I.

Many gorgeous and touching photos were shared of the exhibit over the Rembrance Sunday weekend.

From a single flower to a stunning sea of red - how the #TowerPoppies grew and grew http://t.co/Xkbpz0Njlv pic.twitter.com/qnO7m9zWdv

An aerial video tour of the Tower of London poppies - filmed by drone http://t.co/IiYJGLygEr pic.twitter.com/k1KChNrTyC

Take a moment to browse the #TowerPoppies hashtag on Twitter for a real-time look from visitors over the past week.

Amazing image of visitors at the @TowerPoppies...like silhouettes of fallen heroes of #WW1. (Pic by @Johnny_coolcat) pic.twitter.com/Cync0UsOJ8

The official Historic Royal Palaces Twitter account - the charity that oversees locations such as the Tower, Hampton Court, Kensington Palace and others – has also been tweeting many photos and behind-the-scenes tidbits as the exhibit neared completion.

The final poppy – that is, poppy number 888, 246 – was planted Cadet Harry Alexander Hayes as part of the Armistice Day ceremonies.

Today we'll be commemorating #ArmisticeDay with the planting of the last poppy #TowerPoppies pic.twitter.com/ox8l8RLTLC

Cadet Hayes, who is only 13 years of age, was handed the last poppy by artist Paul Cummins.

Cadet Harry Alexander Hayes plants the last of the 888,246 poppies in the moat #TowerPoppies pic.twitter.com/VaRvoho9g1

All sorts of famous people have visited the exhibit during its three month creation, including Prime Minister David Cameron, the Duke and Duchess of Cambridge, Prince Harry and many more. Even Joan Collins tweeted a photo of herself at the exhibit.

The Tower Poppies have quite captured the public’s imagination, which you can tell because someone’s even recreated one of the installation’s more dramatic sections in LEGO form:

Take a look at this wonderful #Lego representation of the #TowerPoppies by @nicksweetman - a fantastic effort! pic.twitter.com/dnDsVCj9jO

For those who are interested, this official video provides an overhead look at the scale of the Tower Poppies installation. It’s quite breathtaking.

The Tower Poppies from above

Many of the Tower Poppies were sold to raise money for charity, but two key pieces of the installation – the Weeping Window an the Wave -  will be going on a national tour in the UK before being permanently installed at the Imperial War Museum.

We're pleased to confirm that these two major features of the #TowerPoppies will be going on national tour until 2018 pic.twitter.com/QL9rLMDX1P

So, maybe those of us who don’t live in the UK will get the chance to see some of the Tower Poppies someday. What a gorgeous installation, indeed.