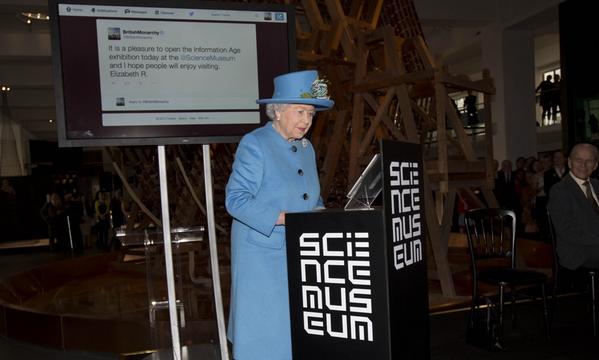 The Queen sends her first tweet. (Photo: The London Science Museum via Twitter)
If you haven’t embraced the world of social media yet, it’s probably time to reevaluate your resistance to exploring life online, because even the Queen of England’s trying out that whole Twitter thing now.

(Think about that for a second, people who make a big deal about not being on Twitter. Even the Queen’s done it now!)

Don’t get too excited, though, there isn’t an official @ElizabethRegina Twitter account out there and active in the world or anything (Yet!). The British Monarchy has actually maintained an active Twitter presence – @BritishMonarchy – since joining the service back in 2009, which practically makes them an early adopter. But it’s been obvious from the start that the official monarchy account is being run by various people in Her Majesty’s office and that she isn’t sending any of the actual tweets herself nor are any of her royal children or grandchildren (though Prince Harry *did* tweet once from the @InvictusLondon account).

But now, it would appear that she has – at least just this once. This momentous occasion occurred to mark the opening of a new gallery dedicated to the Information Age at London’s Science Museum, an exhibit which documents the history of information and communications technology. How fitting indeed that Her Majesty should push a button instead of cutting a ribbon then!

It is a pleasure to open the Information Age exhibition today at the @ScienceMuseum and I hope people will enjoy visiting. Elizabeth R.

And just in case you were worried that some monarchy-related staff intern was out there tweeting up a storm in Elizabeth’s name, the official account was quick to reassure everyone that the preceeding tweet had come from Elizabeth’s own hand. Or, touchscreen, whatever.

If that’s not proof enough for you, here’s actual visual evidence of Her Majesty tweeting:

This is hardly the first time that Queen Elizabeth ahs embraced novel communications technology during her reign. She made her first televised Christmas broadcast in 1957 and was the first monarch to send an email in 1976.

But don’t get too carried away, it seems unlikely that the Queen is going to become a Twitter power user anytime soon:

Royal official: "it's a reasonable assumption that Her Majesty may not become the most prolific individual tweeter." pic.twitter.com/dmRXZtzb2r

This is a shame for many reasons, not the least of which being wouldn’t we all love to know the Queen’s thoughts on this season of Doctor Who…