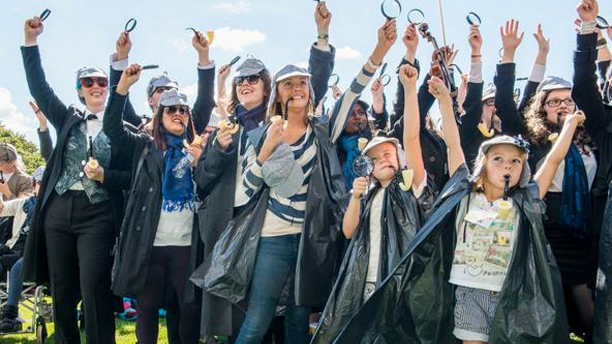 This crowd at the Sherlock Record event looked awesome! (Photo: Sherlock Record via Twitter)
For being a fictional character and all, Sir Arthur Conan Doyle’s great detective Sherlock Holmes sure does seem to be involved with a lot of real-world records and record attempts.  Holmes already holds the Guinness World Record for most frequently portrayed literary human character in television and film – note the human quantifier because otherwise he’d lose out to Dracula – and has now been involved in a very different sort of record in Yorkshire, of a slightly greater order of magnitude.

A group of fans in Leeds decided to attempt to gather the most Sherlock Holmes-es in one place at the same time, in order to break the world record for doing so (you get a cookie if you would have ever even guessed there was a world record for that) and, more importantly, to raise money for the Yorkshire Brain Research Centre at St. James’s Hospital, Leeds.

And so, that’s how over four hundred people turned up in nearby Temple Newsam to participate on August 31, dressed in their best deerstalkers and scarves, and armed with pipes, magnifying glasses and violins.

You can watch a video from the gathering – featuring fans in deerstalkers getting down to fan-favorite Moriarty anthem Staying Alive before smashing the record – on You Tube:

What is even the collective noun for this many Sherlocks? Surely it must be something fantastical and perfect – it’s a shame murder has already been taken by crows. Anyway, the large group (Deduction? Case? Solution?) did indeed break the record, with 443 individuals showed up in costume, easily passing the required 250 fans to do so.

We did it! We broke the record!!!! Well done everyone who helped make it happen @sherlockrecord #sherlockselfie pic.twitter.com/MqTxtyafio

The group was so successful they even got what many would deem the ultimate reward – a congratulatory video from Sherlock head honchos Steven Moffat and Sue Vertue:

But, what’s most important is this – the Sherlock Record group raised quite a bit of money to benefit brain research, garnering donations from many countries, including the United States, Chile, Canada, France, Japan, Mexico and more. All funds raised were donated to the Leeds Teaching Hospitals to contribute towards a new Yorkshire Brain Research Centre.

"Sherlock was the perfect fit for brain research as the brainiest detective of all time was born in Yorkshire,” said the centre’s appeal director Clair Challenor-Chadwick. “He helped us raise awareness of this much under-funded area to help patients with dementia, epilepsy, Parkinson's and MS."

Pretty darn cool, if you ask me. And it looked like a great time.

Seriously, Sherlock Holmes fans really can do anything.  If you’re so inclined you can see more photos from the day in the gallery on the official Sherlock Record website.