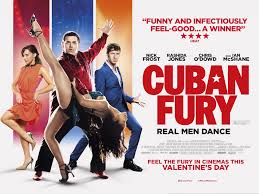 The one-sheet for "Cuban Fury" (Photo: StudioCanal)
If you’re anything like me many of the British films you hear about and are excited to see never come to your local cinema. My nearest art house theater is about an hour away so I often find myself forgoing that trek and waiting for the DVD release instead. One example of such a motion picture is Cuban Fury which I finally got to watch via digital download.

This film tells the story of Bruce Garrett (Nick Frost) who, as a young man, was a salsa dancing phenom.  However, after a vicious beating by some bullies, Bruce retired his sequins and quit the competitive dance circuit.

Flash forward to present day and we find that Bruce works for an industrial equipment company and lives a joyless, lonely existence. His sister and former dance partner, Samantha (Olivia Colman) and his golf buddy, Gary (Rory Kinnear) are his only support system. Then one day Bruce’s new boss Julia (Rashida Jones) arrives from America and his cautious life is changed forever.

Upon their first awkward, head-butting meeting Bruce believes Julia to be out of his league, but when he discovers she’s crazy about salsa dancing, he sees a glimmer of hope. Bruce goes back to his salty old dance instructor, Ron Parfitt (Ian McShane) hoping for a little refresher course, but Ron’s having none of it. It quickly becomes apparent that his former student is far too out of shape to just jump in where he left off when he was 13. Bruce must prove his commitment to his teacher and in the process regain confidence in himself.

If you’re on the fence about watching a Nick Frost movie minus his ever-present co-star Simon Pegg, here are a few reasons why I believe Cuban Fury is worth a watch.

It’s Nick Frost’s rom-com debut. In most cases he’s the side-kick, the wingman, the sort of weird, chubby guy without a love interest. But as Bruce, Frost portrays a romantic underdog that you very much want to see succeed with the pretty, yet slightly clumsy Julia.

One thing about the casting of this relationship is that while Rashida Jones is perfectly fine, any number of actresses could have played this part the same way. And maybe that’s the way the director wanted it because ultimately this is Bruce’s journey, but the girl in the equation ends up coming off as rather one dimensional.

See Chris O’Dowd as a cringe-worthy jerk. If you were not already aware, I’m quite a rabid Chris O’Dowd fan. He’s played a slacker geek in The IT Crowd, a loveable cop in Bridesmaids and an imaginary friend in Moone Boy- mainly likeable characters with a gawky side. However, in Cuban Fury, Chris goes against type as Drew, the misogynistic office bully who delights in making Bruce’s life a misery. This, of course, includes trying to horn in on Bruce and Julia’s slowly blossoming feelings for one another.

I won’t lie it was difficult to watch O’Dowd being such an arrogant thug, but he was so awful he was good. I just hope he doesn’t end up being cast as baddies all the time now.

Meet Bruce’s dance classmate, Bejan, the best over-the-top character I’ve seen in a comedy since The Birdcage’s Agador. Actor/comedian Kayvan Novak steals each scene he’s in as Bruce’s unlikely new pal with a very unique take on everything from chest hair to how to best imbibe a Fanta soft drink.

Sure, Bejan gives Bruce fashion and grooming advice, but more importantly, he encourages him to believe in his talent and take a chance on his dream.

Olivia Colman can do no wrong. As Bruce’s sister Samantha, Colman portrays the type of character she does particularly well – the feisty girl with a heart of gold and a healthy dose of tough love for those who matter most to her.

Olivia’s wardrobe alone is enough to make her appearance worthwhile and just wait until you see her dance with Nick Frost near the end of the movie. In my opinion, she’s not in this film nearly often enough.

Get ready for the best car park dance-off you’ll ever see. As the competition for Julia’s affections intensifies, the hostility between Bruce and Drew finally erupts in the form of this…

Forget about all the expert salsa dancing; this has to be my favorite dance sequence in the whole film. Also keep your eyes peeled because later in this scene the audience is treated to a very special guest cameo appearance.

Overall, I enjoyed Cuban Fury. There’s dancing, some quirky characters and a dark horse to root for. Earlier I called it a rom-com, but that’s really only a plot device. This movie is, at its heart, a story about a man who rediscovers his passion and starts truly living for the first time in his adult life.

If I’ve piqued your interest, Cuban Fury is available to stream on Amazon Instant Video or to purchase on DVD. What elements or actors appeal to you most? And if you’ve already seen the movie, what was your assessment? We’d love to hear your thoughts!