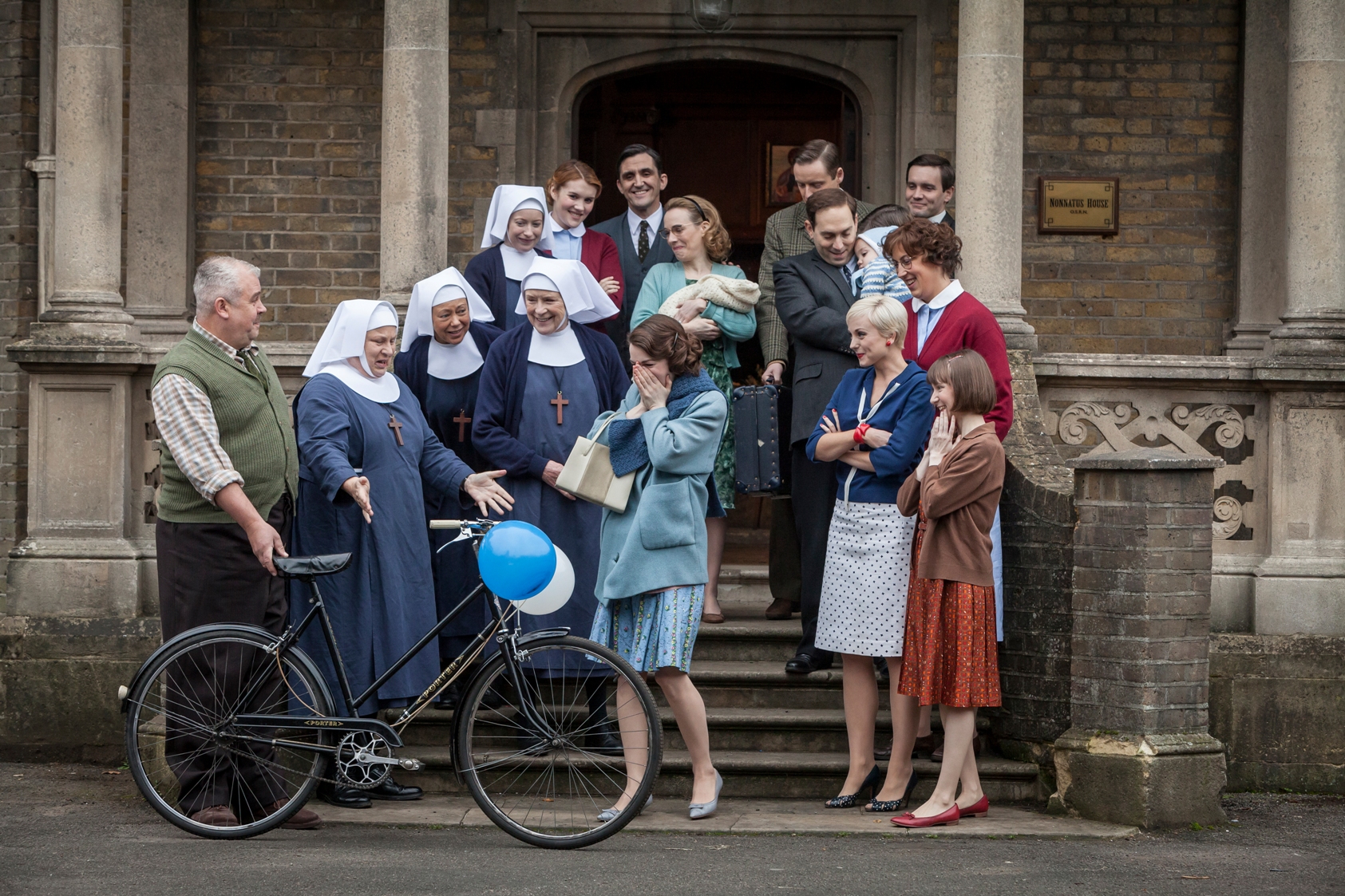 The cast of "Call the Midwife" Series 3 (Photo: Courtesy of John Rogers/Neal Street Productions 2013)
Iconic actress Vanessa Redgrave has been a part of the Call the Midwife cast since the show began in 2012, as the voice of Jennifer Worth (née Lee), whose memoirs provide the basis of the show and whose frequently heartwarming, occasionally treacle-y voiceover narration bookends each episode.

Her narration has become as much as part of the show as the midwives themselves – as evidenced by this Red Nose Day spoof from a couple years ago – so it’s a relief to know that Redgrave will indeed be continuing on in her role as the voice of reason and perspective, even though Jessica Raine – who plays the younger Jenny – has departed the canvas for the time being.

But that’s not all: Redgrave herself will actually appear herself in the period drama’s fourth season. The seventy-seven year old actress will appear in the 2014 Christmas special, which has just begun filming, playing the mature Worth onscreen for the first time.  My best guess: A later in life Worth explains how she knows all these stories when she left the midwives in 1959. After all, Worth did maintain a lifelong friendship with the residents of Nonnatus House, so it would make sense.

"We're delighted to be welcoming Vanessa Redgrave on screen, having hugely enjoyed her narration of the series to date," said Pippa Harris, Executive Producer of Neal Street Productions, which makes the series.

Writer Heidi Thomas used a trilogy of the real Jennifer Worth’s memoirs to craft the stories for Call the Midwife’s first two seasons, and received the author’s blessing to continue on with the characters into Series 3 and beyond.

Redgrave will not be the only new face joining the midwifes in the new season – Lark Rise To Candleford’s Linda Bassett will play Nurse Phyllis Crane and Fresh Meat’s Charlotte Richie is to play Nurse Barbara Gilbert.

Filming has begun on the Christmas special and the new eight-episode Series 4, which will likely air in early 2015.

Per the official press release, audiences can expect to see a similar mixture of laughter and tears this time around, with fascinating and emotional stories celebrating the people of Poplar, and the much-loved residents of Nonnatus House. Series four sees the community of nuns and nurses in 1960, on the cusp of much change in London’s East End. A new decade dawns, and with it come different and exciting challenges for the team at Nonnatus House. Can the nuns and midwives hold onto their traditional values in a rapidly changing world?

Don't you love how that description is simulataneously super vague and also thrilling?

Who else is excited to see Redgrave actually appear on the show?