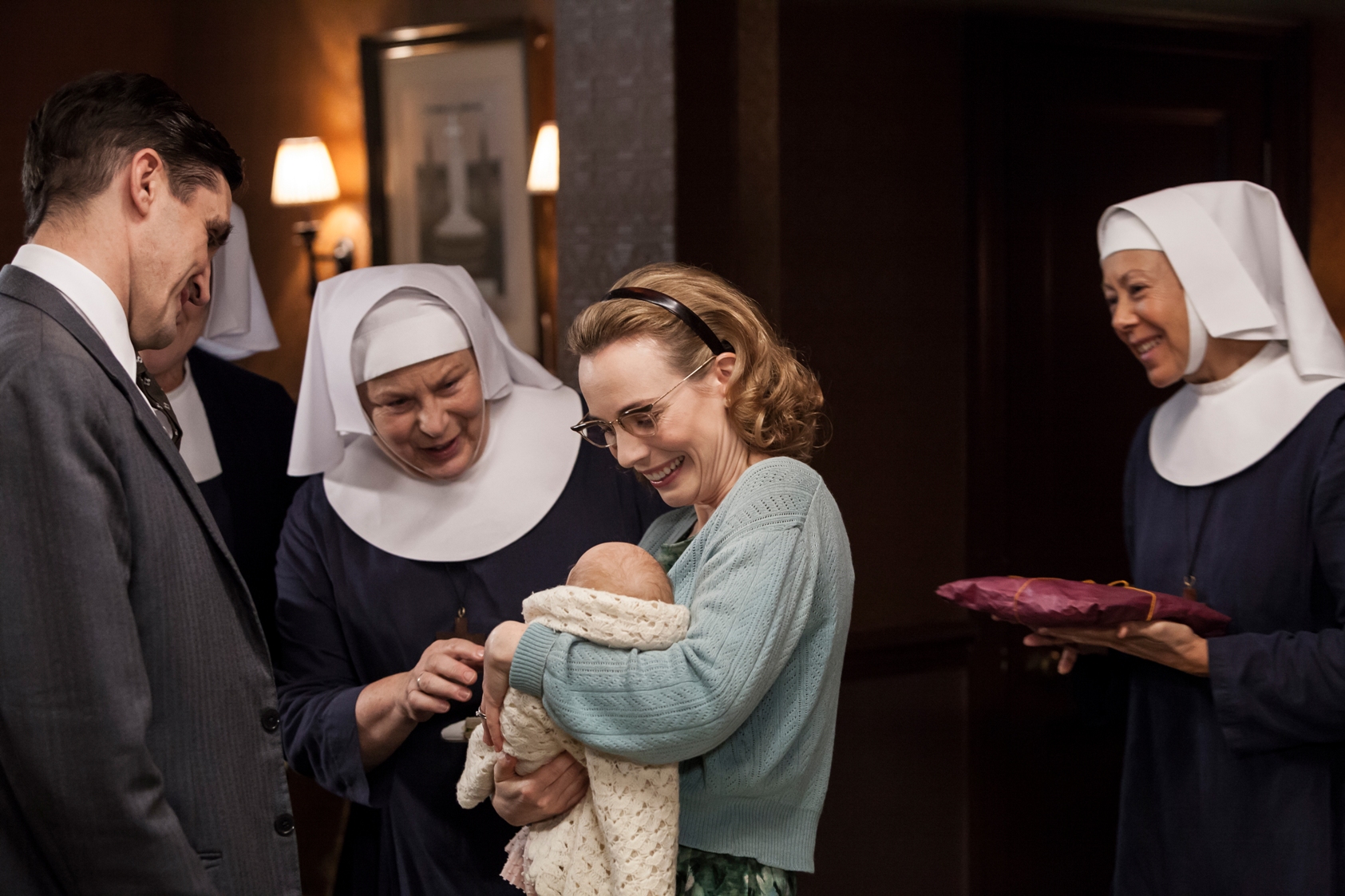 The Turners, Sister Evangelina, Sister Julienne from "Call the Midwife" (Photo: Courtesy of John Rogers/Neal Street Productions)
Previously, on Call the Midwife: You can catch up everything that happened during last week’s episode this way.

Okay, did everyone have their hankies ready for the finale of Call the Midwife Series 3?  As the saying goes, I have good news, bad news and for lack of a better term, bittersweet news that in fact is a new beginning for one of our major characters. So I’ve decided to begin with the good news…

Ever the well-meaning, but slightly overbearing ex-nun, Shelagh Turner has her choral society working hard to prepare for an upcoming local choir festival. She throws herself into this project perhaps to keep her mind off the rift that has grown between her and her husband since the discovery that he had done a stint in a psychiatric facility after the war.  Both feel bad that this secret has hurt their chances of adopting a baby and has affected their marriage as well.

But lo and behold, an official letter comes from the adoption charity effectively approving the Turners’ application after all. Though the letter brings the best possible news, Shelagh stops making copious amounts of desserts and expresses her concern that since the revelation their home is not so happy anymore. Patrick apologizes for not telling her about his breakdown and reassures her that it wasn’t her fault that he withheld this information about himself.

As the couple waits for a baby to become available, Shelagh continues to work on the details of the choir festival which now includes a change of song choice (another choir chose the same Mozart piece so Mrs. Turner goes another direction with May the Good Lord Bless and Keep You). She also expands the choir to include the Scouts, Girl Guides and any other Poplar resident she can coerce.

Just as the festival is about to start, the Turners’ get word that a newborn baby girl has just come available when her sixteen year old mother changed her mind about keeping the infant .  The whole family rushes off to the orphanage to meet their new addition while Trixie takes over conducting the choir. Patrick places their child in his wife’s arms as she meets her new daughter for the first time.

Another lovely detail is that Sister Julienne saved the night dress that Shelagh had handmade and then given up when she found out she couldn’t bear a child herself. Julienne surprised Shelagh with this simple gift, a symbol of her faith that Shelagh would someday become a mother.

On to the bad (or more accurately, sad) news of Chummy and her dying mother – one of the most touching stories yet told on Call the Midwife.  Chummy is understandably upset about the impending loss of her mother, made worse because of their very strained and distant relationship. Sister Monica Joan notices Chummy’s distress and invites her to prayer with the nuns. Her concern for Nurse Noakes is touching and we learn that the elder nun had a similarly unaffectionate rapport with her mother and regrets their failure to make amends before it was too late.

Against medical advice Lady Browne has checked herself out of the hospital and into a private nursing home funded by a charity called the League for Distressed Gentlewomen. When Chummy comes to visit, she brings gifts – two framed family photos which Lady Browne eschews as tacky and some food in Tupperware which, of course, her mother has never heard of. Chummy gathers up everything except the satsumas Peter sent and leaves in angry tears.

When PC Noakes arrives at the nursing home later to check on his mother-in-law, he finds her in excruciating pain. The administrator tells him they are not equipped for such cases and Lady Browne should be in hospital. Peter takes her home and calls for Dr. Turner who tells his patient that she has no more than a few weeks to live. She asks about people’s reluctance to use the word “cancer” to which the doctor replies that it’s because cancer is the thing they fear most.

Chummy decides to nurse her mother at home until the end, with the help of her midwife friends, of course. Sister Monica Joan, after becoming quite disoriented at first by her own family memories, is given a purpose of sorts as she assists Chummy in her time of need providing her with extraordinary spiritual support and wise counsel.

For example when the nun hears Lady Browne mention how much she enjoyed Nivea cream and manicures, Sister Monica Joan raids Trixie room for supplies and brings them to Chummy who refuses them at first. She can’t bring herself to touch her mother except in a nursing capacity. However, the nun urges her to push past her discomfort and do it anyhow or she will regret passing up the chance she had to bond with her mother. Wise Sister MJ! The manicure is the ritual that breaks the ice because Chummy’s mother reaches out to stroke her daughter’s hair, something she hasn’t done since Camilla was a small baby.

On the final night, Chummy is by her mother’s side with Sister Monica Joan and Jenny Lee standing by. Distressed by what she knows is soon to come, Chummy spills tea all over her nurse’s uniform. Jenny grabs a robe nearby but Chummy is reluctant to put it on because, not only is it her mother’s, but it removes her from the protective boundary of her nursing role. With her recent interest in the family aspects of hospice care, Jenny encourages Chummy to put it on and lie down with her mum.

As I write this, I’m welling up again remembering the scene - Chummy telling her mother she loves her as Lady Browne takes her final breaths.  It is a good and peaceful death for the patient and her formally estranged family thanks to the advice and loving support of Chummy’s friends.

No putting it off any longer, I suppose. The bittersweet news must be addressed. Admit it, Nurse Lee had been disengaging for some time, perhaps even from the moment that she was made head midwife and certainly since the death of her boyfriend, Alec. She came back to Nonnatus, but her heart was never fully in it. When Sister Julienne refuses her request to nurse Lady Browne until her death, you know the wheels are in motion in Jenny’s mind to leave Nonnatus House and midwifery.

Nurse Lee goes through a long and difficult labor with a new patient, Jeanette Heckford (Michelle Duncan) and for the first time can’t see the job through to the end. This is the sign she and the rest of us need to understand that it’s time for Jenny to move on. (Remind me, but wasn’t that why she wasn’t happy at the London, because she couldn’t see a patient through from start to finish?) An assumed heart-to-heart chat with Sister Julienne and Jenny suddenly announces she is moving on to work at Marie Curie Cancer Hospital to pursue her passion of caring for the terminally ill.

Yes, her boyfriend tragically died and her friend’s mother was dying, but I just feel we didn’t see enough development of Jenny's new self-proclaimed calling to justify her sudden departure. If I may say, she also got over Alec much faster than her married lover of the past.  This Philip Worth fellow (Stephen Ashfield) inauspiciously comes along, they like the same painters and suddenly there’s an unspoken understanding between them. If I’d blinked at the wrong time, I might not have even noticed him and we are obviously meant to assume that Worth is her husband-to-be.

As someone pointed out in the comments earlier in the series, Jennifer Worth’s (the real Jenny Lee) memoirs were exhausted in the first two series so Jenny’s presence is not mandatory. I’d read that Jessica Raines, the actress who plays Jenny, was ready to move on as well. That’s the way these things go much of the time. I just wish they’d done a less hurried job of sending off the character that made Call the Midwife possible.

So that’s about it for another series. Thanks for following my recaps throughout the past eight episodes. Remember this is your last chance to share your thoughts about our beloved midwives for a while. What were your favorite moments? In your opinion, who was the best new character in series three? Which storyline brought you to sobs? And who’s with me and votes that Cynthia gets a boyfriend next time?