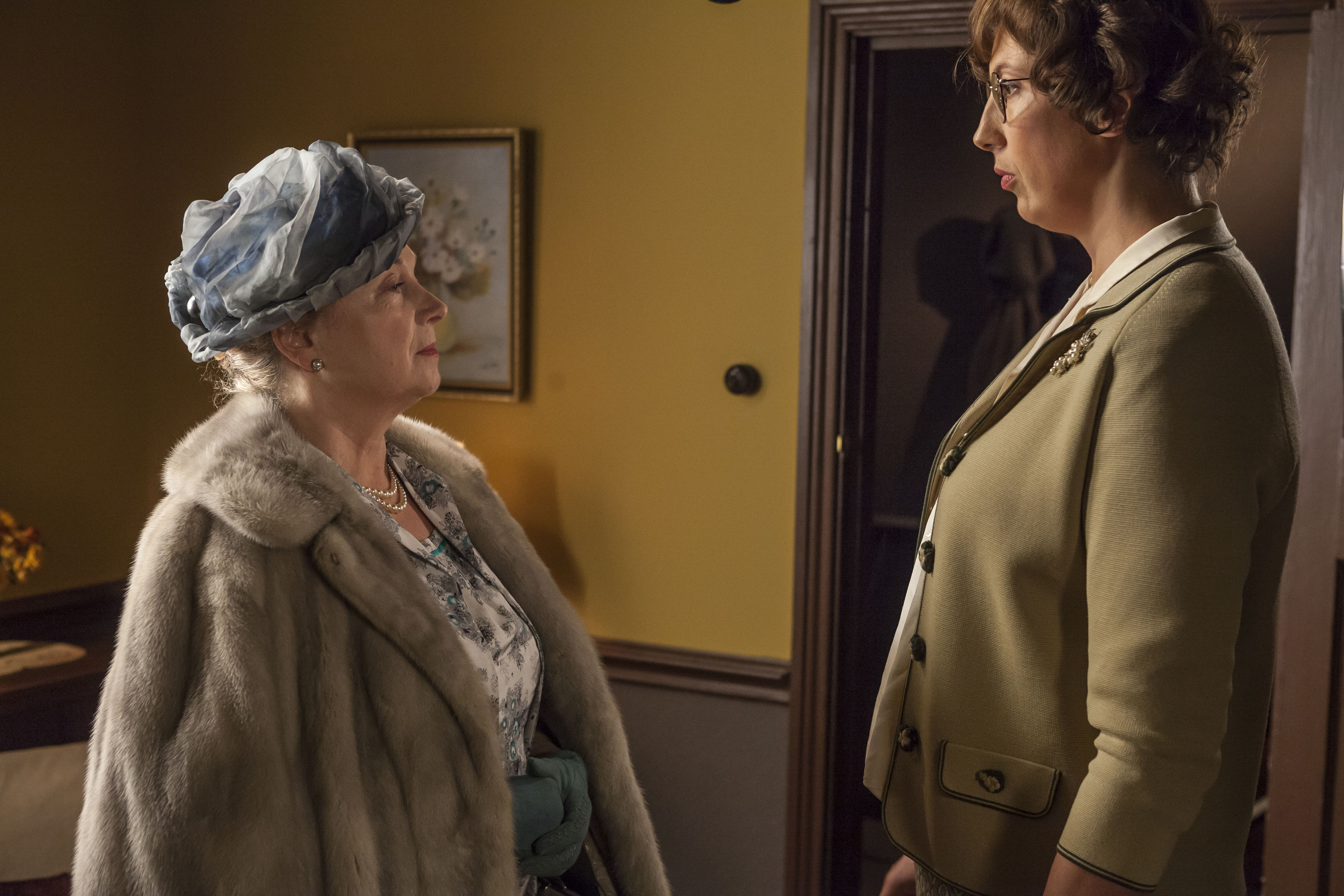 Lady Browne and Chummy in Episode 7 (Photo: Neal Street Productions)
Previously on Call the Midwife: Catch up on everything that happened last week with the recap post, here.

By virtue of what midwives do, every installment of Call the Midwife features some element of motherhood.  However seeing as today is Mother’s Day in the US, the timing of this week’s episode is quite apropos considering it is almost exclusively about mothers and the burdens and struggles that they bear.

But before we get into the abundance of maternal storylines, let’s take care of other business.

After taking her compassionate leave, Jenny Lee has finally returned to Nonnatus House…well, almost. She’s come home to the convent but has been voluntarily seconded to the maternity ward of the London Hospital. Nurse Lee feels this will be best because people at the hospital don’t know her and won’t be asking her how she’s doing or feeling all the time.

But Jenny has a hard time adjusting from the complete care of district nursing to the rationed system of hospital midwifery;  not being able to follow through with a patient from beginning to end, not being able to reassure a scared mother with some extra attention.

In addition, the tentative romance between Nurse Franklin and handsome curate, Tom Hereward, continues to lurch forward. He asks her to dinner but she insists he take her to the neighborhood dance the following evening instead. Unfortunately, Tom has to cancel their plans when a “struggling parishioner” needs his counsel, a situation that can’t be put off until after the dance. Trixie walks off in a huff.

When Tom confesses to Fred that the work emergency was a lie, he admits his inability to dance and his fear of looking foolish made him cancel the date. Fortunately for the young clergyman, Fred is an accomplished hoofer who takes Tom under his wing, teaching him to waltz on the sly with the help of Nurse Mount and her very forgiving toes.

As is required to happen in these situations, Nurse Franklin sees Tom and Patsy together as they leave their dance session at the community centre. It’s no exaggeration to say that Trixie is visited by the green monster and she wastes no time in confronting her roommate with her allegations. Patsy sets things straight immediately, informing Trixie of Tom’s dancing inadequacies and of his obvious feelings for no one else but her.

This prompts Nurse Franklin to pay Tom a visit wherein they agree to give this date thing another try. As the couple approaches a dance club, the curate hesitates as his confidence takes leave of him once again. Being the take charge kind of woman she is, Trixie pulls Tom to her and they dance a waltz on the street in front of the club. The young midwife returns home to report details of her wonderful evening, clearly besotted with her new beau.

On the edges of a motherhood storyline, Shelagh is bulldozing right ahead with the Turners’ adoption application despite the fact that Patrick is dragging his feet. When Shelagh announces their interview with the agency has been scheduled, her husband reiterates his opposition to the process being so invasive into their past lives.

At the home interview, the representative from the Church of England Adoption Charity questions a five month hole in Patrick’s service and work history. He claims he took a break after he left the war but the interviewer has caught him in a lie because she already knows that he was admitted to an inpatient psych ward at that time. Shelagh is obviously surprised by this news and the adoption rep flatly tells them they won’t be getting a child due to their lack of honesty in the application process.

Shelagh is hurt and angered that Patrick would keep this information from her and asks him to share what happened. He refuses saying it’s the only way to keep the past behind him, but the former nun is having none of it, informing her husband that such a breach of trust is not acceptable. While understandably upset by this turn of events, Shelagh could do with a bit more of Sister Julienne’s compassion and patience, in my opinion.

As for the childbirth stories this week, one is of a mother terribly afraid to lose another baby and the other a mother who loses her baby due to a betrayal of her own body.

One of Nurse Lee’s patients at the London is Fay Rawle (Emily Taaffe), a young woman who lost her first child at birth. She has come in pre- labor for observation with the hope of preventing the same horrible thing from happening again.

Mrs. Rawle asks for extra heartbeat checks and refuses to have a student midwife examine her. Her comments about paying for the best care make her appear demanding and snobbish but the mother-to-be later reveals to Jenny that last time she did everything right and the baby still died. She feels nervous and needs assurances this child will be okay. When she asks if Jenny will be there with her during the birth, Jenny is reprimanded by the ward sister for saying yes when it may not be possible for her to be present when Faye goes into labor.

When Mrs. Rawle does go into labor, Nurse Lee finds that the cord has prolapsed and a C-section will be required to save the baby. Jenny’s shift is over and though she offers to stay later to help Faye, she is pushed aside by her superior.

The next morning, Jenny goes to Mrs. Rawle to give her the good news that apparently no one else bothered to deliver – she has a healthy baby boy. Faye wants to see her son, but this is forbidden since the mother has just had major surgery. Nevertheless, plucky Nurse Lee defies the rules and brings Faye her infant boy into the ward so his mother can see and hold him for the first time.

Needless to say, Jenny gives her notice soon afterwards. She realizes she cannot properly do her job in the hospital setting and she needs to be able to fully care for her patients.

The second childbirth starts happily enough. Sister Julienne and Nurse Miller are helping Pamela Saint (Sophie Rundle) deliver her first child. The baby is born with the amniotic sac intact which Sister Julienne says some people consider a sign of very good luck for the family – a mermaid birth.

Unfortunately this doesn’t end up being the case for the Saint family. First, Pamela is overly concerned that her milk hasn’t come in immediately, but Cynthia reassures her it will take a few days and that she should “top up” with water. Mrs. Saint expresses her concern that the tap water is full of germs and doesn’t want to give water to baby Rose. When Sister Julienne visits the following day, she finds Pamela out of bed, moving furniture and trying to get rid of the dust that will hurt the baby. Julienne impresses upon the new mother her need to rest and suggests she ask her mother to come help for a few days.

Shortly thereafter, Mr. Saint (Gethin Anthony) shows up at Nonnatus House to speak with Nurse Miller. She says that Pamela has a bad relationship with her mother and that Sister Julienne’s insistence that she invite her to help with the baby upsets his wife. He requests that Nurse Miller come for home visits without the Sister from now on.

However, the request is ignored and a good thing because when both Cynthia and Julienne arrive at the Saints’ flat the next day, they find Pamela about to bathe baby Rose in scalding hot water in an attempt to sanitize her from all the germs. Dr. Turner is called in and sedates Pamela for her paranoia. He believes she might be suffering from postpartum psychosis, but arranges for a psychiatric assessment the next day to be sure.

But Mrs. Saint has other ideas. While her husband is out, she takes Rose down to the river in order to get her clean. By the time, George Saint and Sister Julienne find mother and child, Pamela is perched upon the top of a pier ready to jump in with the crying infant in her arms. Already distrustful of Sister Julienne, Pamela tells her to take off the thing on her head as it scares the baby and that’s why she’s crying. The Sister obliges, takes off her wimple and finally succeeds in talking the mother into turning over the baby and coming down from the pier.

Over unspecified weeks or perhaps months, Mrs. Saint is treated for her psychosis and depression at Bow House, a psychiatric hospital. She even requires electro-convulsive therapy. At first George refuses to visit her as he is shamed and angry about what Pamela almost did to their daughter. But he finally comes around (with some persuasion from Sister Julienne) and he and Rose visit Pamela who is finally on the mend at Bow House.

But the perhaps the most touching story comes from our beloved Chummy. Her cold and distant mother, Lady Browne (Cheryl Campbell) has come to town and drops the surprising bombshell that she will not be returning to Madeira. She has left Chummy’s father because of his “outside interests” and, due to her abandonment of her spouse, has been cut off financially.

Chummy invites Lady Browne to stay with her and Peter in their modest house where she hopes her mother will bond with Freddy and will have a chance to get back on her feet. Despite Chummy’s best efforts to make the house immaculate and tasteful, her mother is neither impressed with her daughter’s life nor charmed by her grandson. However, when Lady Browne begins questioning Peter about Freddy’s inadequate schooling plans, Chummy stands up to her mother regarding how she has chosen to raise her child. While he will not have the same financial and social advantages, he will know that he is loved. With that, Chummy proceeds to uninvite her mother to lodge with them in Poplar.

A bit later as Peter comes upon Lady Browne saying goodbye to Freddy, she suddenly falls ill. At the hospital we learn that Chummy’s mum has malignant tumors spread throughout her body and nothing can be done for her at this stage. Chummy, always compassionate and forgiving, grieves not only for the imminent loss of her mother, but also for the unthinkable pain she went through being lonely for so long.

Mothers can’t be perfect, but they aspire to love their children perfectly. The midwives of Nonnatus House are often the first step in a lifetime of attempted perfection. As this episode demonstrates, life does have a tendency to get in the way - fear, illness and miscommunication can produce roadblocks to the mother/child bond.

With only one episode of series three remaining, what’s in store for our favorite Poplar residents? Will Shelagh and Patrick mend their differences in order to expand their family? Will Chummy and her mother have the time necessary to reconcile?  Will there be a cliffhanger or a definitive resolution? Share your Call the Midwife opinions and thoughts in the comments below.