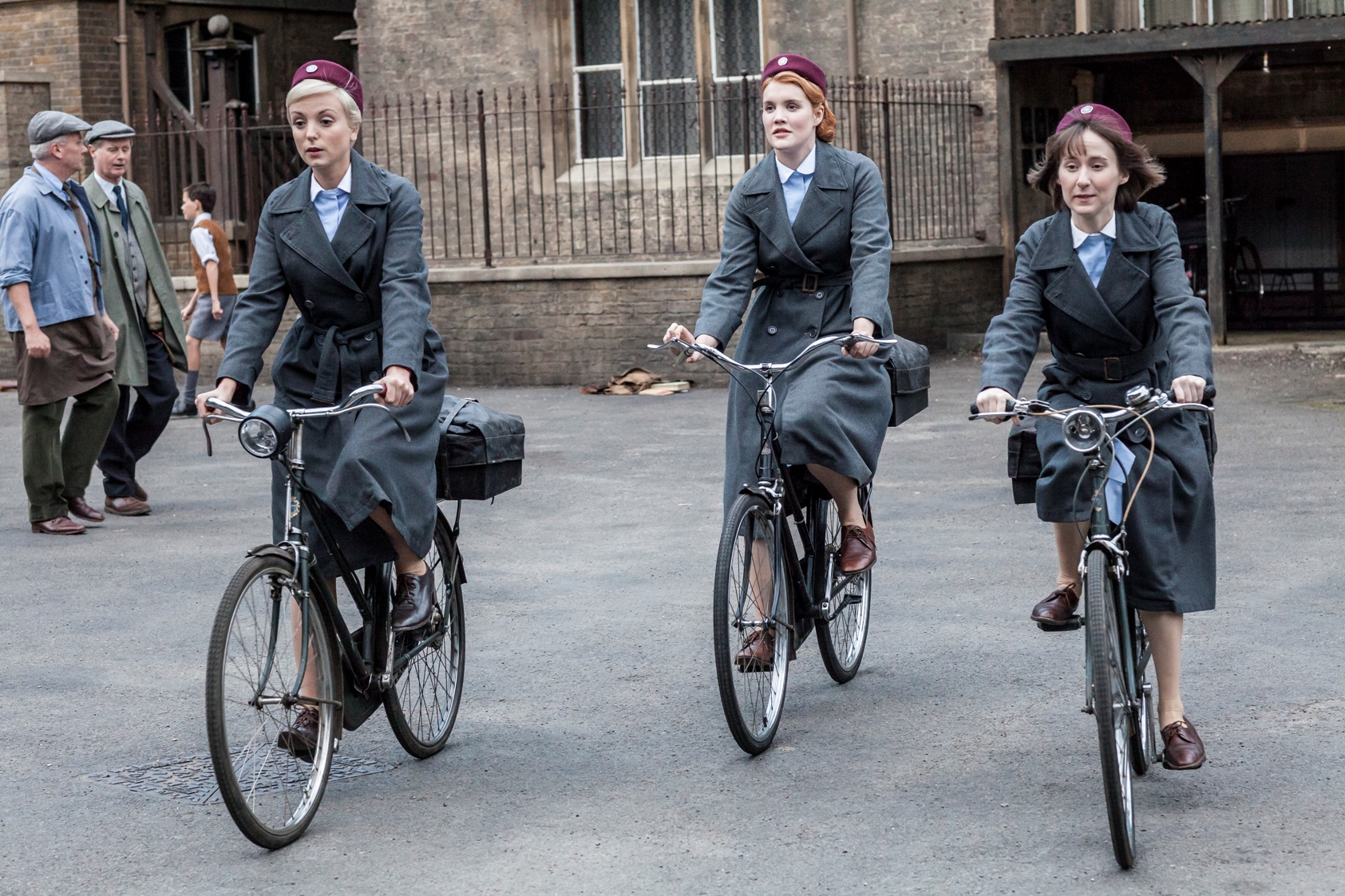 Previously, on Call the Midwife: Catch up on last week's drama with the Episode 5 recap, right this way.

If this week’s episode has a theme, it may be that when things don’t go the way you expected, there’s often something important to be gained from life’s little detours. Nurses Mount and Lee both experience the disappointment of a well laid plan – one career related the other romantic. And Shelagh Turner finally sees her way clear to pursue a different kind of motherhood.

Let’s begin, shall we?

It’s Harvest Festival season and the good people of Poplar are preparing to share the bounty. Curate Hereward is arranging for donation boxes to be placed around the neighborhood and Sister Winfred practices making the elusive sheaf loaf.

Even though Sister Julienne has returned to Nonnatus House, the midwives are busier than ever with thirty babies due in the next month plus the usual district nursing duties. At the frantically overrun antenatal clinic, Nurse Mount shows herself to be less than tactful and short on patience particularly when she announces the mothers should keep their children under control and leave promptly when their appointment is through.

Soon after this incident, Sister Julienne assigns Patsy to district nursing duties much to the young nurse’s annoyance since she came to Nonnatus expressly to gain midwifery experience. The first patient she meets on her rounds is Maurice Glennon (Neal Barry) who is off work from a nasty fall and getting sicker instead of better. Despite Mr. Glennon’s misfortunes and his wife’s money concerns, he is a cheerful man and a loving father.

As the days go by, Maurice’s condition worsens with fever, cough and a mysterious rash. He’s been away from work so long at this point that he loses his job and his wife must work full-time to feed the family.  Finally Mr. Glennon takes such a bad turn that Nurse Mount is summoned wherein she discovers he has scarring on his legs from ulcers he sustained in a Japanese POW camp in Burma.

By this stage Mr. Glennon’s illness has developed into pneumonia and Dr. Turner is sending him to hospital. Patsy wonders if her patient might have contracted a tropical disease during the war and though Dr. Turner doubts this based on the excessively long incubation period, he contacts specialists. Word comes back that Maurice might have a South Pacific roundworm that has been awakened by the steroids prescribed for his back injury.

It’s good news that the cause of Mr. Glennon’s malady has been found yet Patsy is still concerned since she has learned the chance of recovery for her patient is very low. Patsy confides in Trixie that she feels for this man particularly because she too was locked up in a Japanese internment camp as a child in Singapore. She was separated from her father and she watched her mother and sister die due to poor conditions in the camp. The box she keeps under her bed is full of mementos and is all she has left of her family.

The next morning without a word to anyone, Nurse Mount leaves the house on a quest to find an experimental drug said to hold great promise for people with Mr. Glennon’s roundworm ailment.  The midwives are worried especially after hearing what Trixie tells them of Patsy’s childhood. Just as the midwives call in PC Noakes to help with their search, the new nurse returns revealing that she traveled to Liverpool to obtain Maurice’s life-saving medication.

With his condition much improved, Nurse Mount visits Mr. Glennon in the hospital. He tells her that Sister Evangelina filled him in on her past and encourages her to follow his life philosophy to not let your misfortunes find a home.

Meanwhile Nurse Franklin has been quite a busy bee this week. Her new patient Phoebe Doyle (Amy Molloy) has just moved from Belfast to London and is very near her due date. She and her husband Declan (Killian Scott) have no friends or family nearby and when Trixie comes for her first home visit the next day she hears the couple arguing. Phoebe explains that the two eloped since he’s Catholic and she is Protestant and no one would marry them back home in Northern Ireland. Now Declan has arranged a registry office wedding even though Phoebe had her heart set on a church ceremony.

The couple makes up and the civil ceremony wedding goes ahead. Not long afterward, Declan calls the midwives with the news that Phoebe has gone into labor. Trixie and Cynthia assist Mrs. Doyle with a fairly routine birth but quickly they find the infant boy has trouble breathing. Trixie attempts to help the baby breathe, but Phoebe is panicked and afraid their child will die as punishment for the couple crossing the “religious divide.” While Phoebe and the midwives await an ambulance, Declan leaves to fetch the new curate to baptize his baby in case it dies because it’s important to Phoebe. The infant is christened James Declan and fortunately the baby does survive.

It also appears that love is in the air for Nurse Franklin. She is approached by the new local clergyman, Tom Hereward, for her advice on buying dodgy paint from handyman/entrepreneur Fred; however this is just a prelude something more personal. He then proceeds to invite her to join him at a cricket match which will include a picnic hamper and pleasant company. Trixie accepts the invitation expecting an event where she imagines she will mingle with “the great and good.”

Hereward’s best intentions go awry when the Cub Scouts field trip gets cancelled and he feels obligated to take them along to the cricket match in his recently acquired and badly battered bus. Far from a romantic adult afternoon, Trixie spends the day with a rowdy crowd of boys cleaning up vomit and eventually walking to a telephone box in high heels after their predictably unreliable transport breaks down. The group returns late to Poplar and though Tom is apologetic, Trixie is not ready to agree to another date no matter how hunky he may look in a sleeveless vest.

At the Doyles’ house during the baptism of baby James, Trixie can see that a kind and giving man Tom is. Perhaps she’s not sure he’s her “type” (which she thinks is Rock Hudson) but they at least return to a friendly footing.

And finally, what the Turner family storyline has been headed for from the beginning, the adoption option. Shelagh meets the mother of Timothy’s new friend Colin Monk. As the boys play, the women converse about motherly things such as Shelagh being a step-mom and Colin being adopted.

When Dr. Turner returns home from work, Shelagh approaches him about adopting and he is only too happy to give it a try, a new experience for them both. They sit Tim down to ask his opinion on a new sibling. His only concerns are sharing a bedroom, having to split his pocket money and passing off his piano playing duties to the little nipper. All Turners are agreed and Shelagh moves ahead with her plan.

Shortly thereafter, Mrs. Turner is thrilled to present her husband with an application to adopt from the Church of England Adoption Society. Patrick doesn’t like that they are required to answer so many personal questions and suggests they look at other adoption charities as well, but his bride’s mind is made up. They will fill out the questionnaire that night!

How did you like this installment of Call the Midwife? Will Tom and Trixie become an item? Is Dr. Turner trying to hide a mysterious past? Will Sister Monica Joan become a professional astronomer? There are only two more episodes in the series so get let’s talk Midwife while we can!