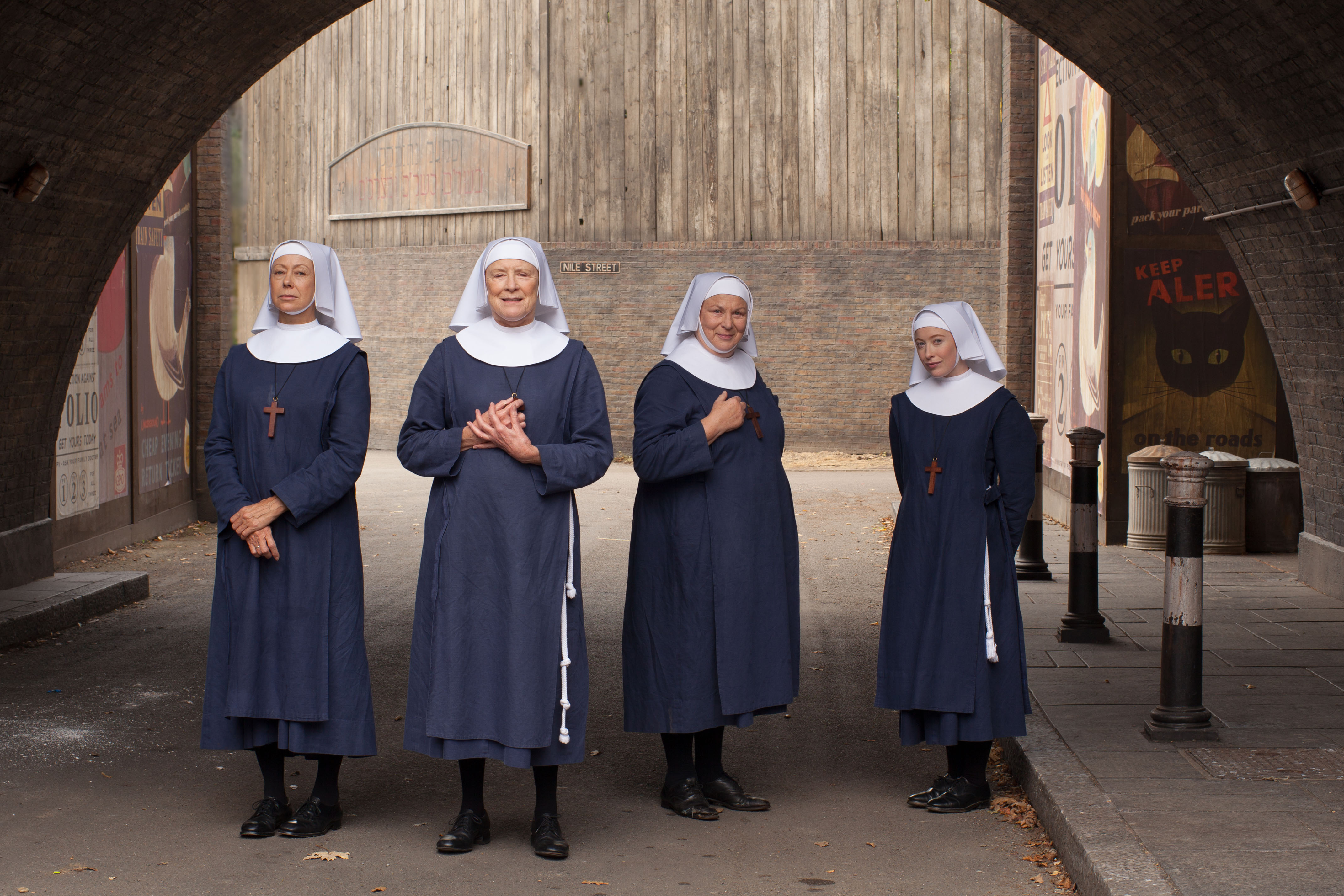 The sisters. (Photo: Courtesy of Laurence Cendrowicz/Neal Street Productions 2013)
Previously, on Call the Midwife: Last week's episode featured a five-Kleenex warning for angst, and ushered in some big changes for all the characters. Catch up on everything that happened in the Episode 4 recap post.

This week we find that Nonnatus House is severely understaffed. Besides Jenny taking her compassionate leave at the mother house, an exhausted Sister Julienne has a fainting spell which results in Dr. Turner sending her away to rest for a fortnight!

Reinforcements come in the form of Shelagh Turner who fills in for Sister Julienne as midwife administrator. This is actually perfect timing for the former nun who, at a loss for what to do with her time and talents, finds herself overprotectively smothering her polio-stricken step-son.

As her first administrative decision, Mrs. Turner arranges for the addition of a new lay midwife, Patsy Mount (Emerald Fennell). You may remember Nurse Mount from Series 2 when Jenny was seconded to the London to work on the men’s surgical ward. She and Patsy commiserated over the horrible surgeon who almost killed Jimmy.  Nurse Mount is efficient and no-nonsense in her approach to work which appeals to Sister Evangelina; however, she’s also a bit of a party girl with a bawdy sense of humor which wins over the younger midwives as well.

In addition, Chummy has signed on for some extra shifts much to the frustration and displeasure of her husband, Peter.  There are a few scheduling snafus but Nurse Noakes firmly reminds her spouse of her commitment to midwifery and, being the nice guy he is, Peter can’t begrudge Chummy her calling.

Besides the normal day to day clinics and deliveries, the Nonnatus residents are busy planning a surprise jubilee celebration for Sister Evangelina. It has been fifty years since she took her vows and it is traditional to have a Holy Communion service and a tea party which Sister Winifred is in charge of arranging. Unfortunately, she is having some difficulty contacting Sister Evangelina’s relatives and finds only one brother may still be alive. Winifred’s letter is forwarded on to a merchant navy organization that might be able to locate him. 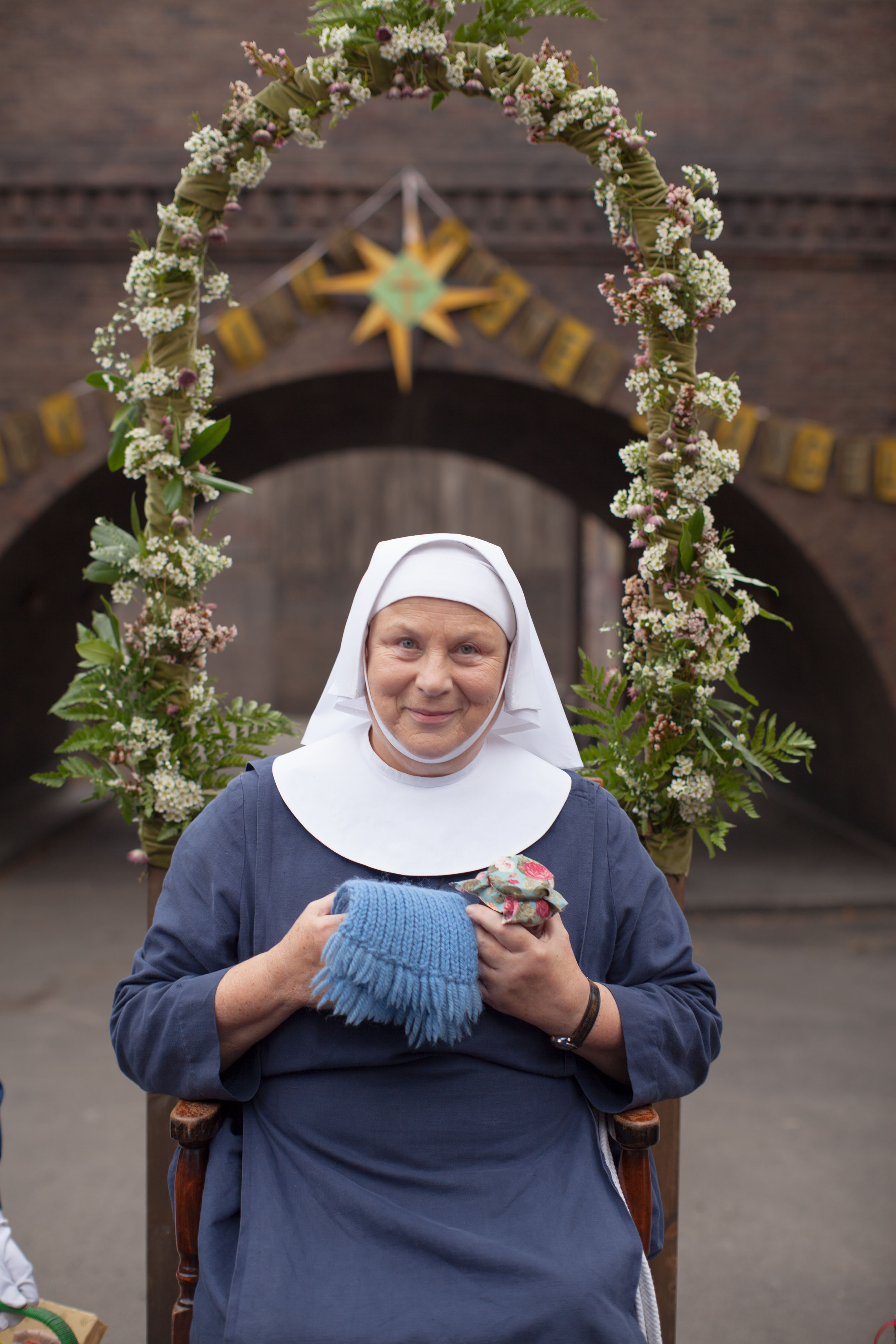 Soon enough the letter does reach Evangelina’s brother Vincent (Tony Turner) who has become a drunken vagrant and he starts skulking around the convent. Unbeknownst to the rest of the house, our favorite curmudgeonly nun has been visiting her sibling in a nearby derelict building, nursing him and bringing him food including a lemon meringue pie found missing by Sister Monica Joan. PC Noakes discovers this undercover operation when he finds Evangelina out in the fog making one of her deliveries. The Sister reveals the soft spot she has for Vincent despite the choices he’s made in his life and tells the constable that her brother was the first baby she ever saw being born which led to her choice to be a midwife in the first place. We also learn her name before becoming a nun was Enid.

PC Noakes calls an ambulance due to Vincent’s poor condition and Dr. Turner finds a place for him in a local mental hospital. By the time the nuns surprise Sister Evangelina with her neighborhood jubilee party, Vincent is able to attend, sober and on the mend. Sister Julienne has made the trip, but the most touching part of this event is that people who were delivered by the Sister over the years get a chance to thank her in person and give her a token of their appreciation which greatly moves the normally stoic midwife.

The medical/social story that predominates this episode centers around Sally Harper (Sarah Gordy) who is a young woman with Down’s syndrome and a resident of the St. Gideon’s Home. Her mother comes to visit and finds her daughter feeling poorly only to discover that she appears to be pregnant.  Mrs. Harper (Debra Gillett) removes her daughter from the home and takes her immediately to Nonnatus House to be examined. 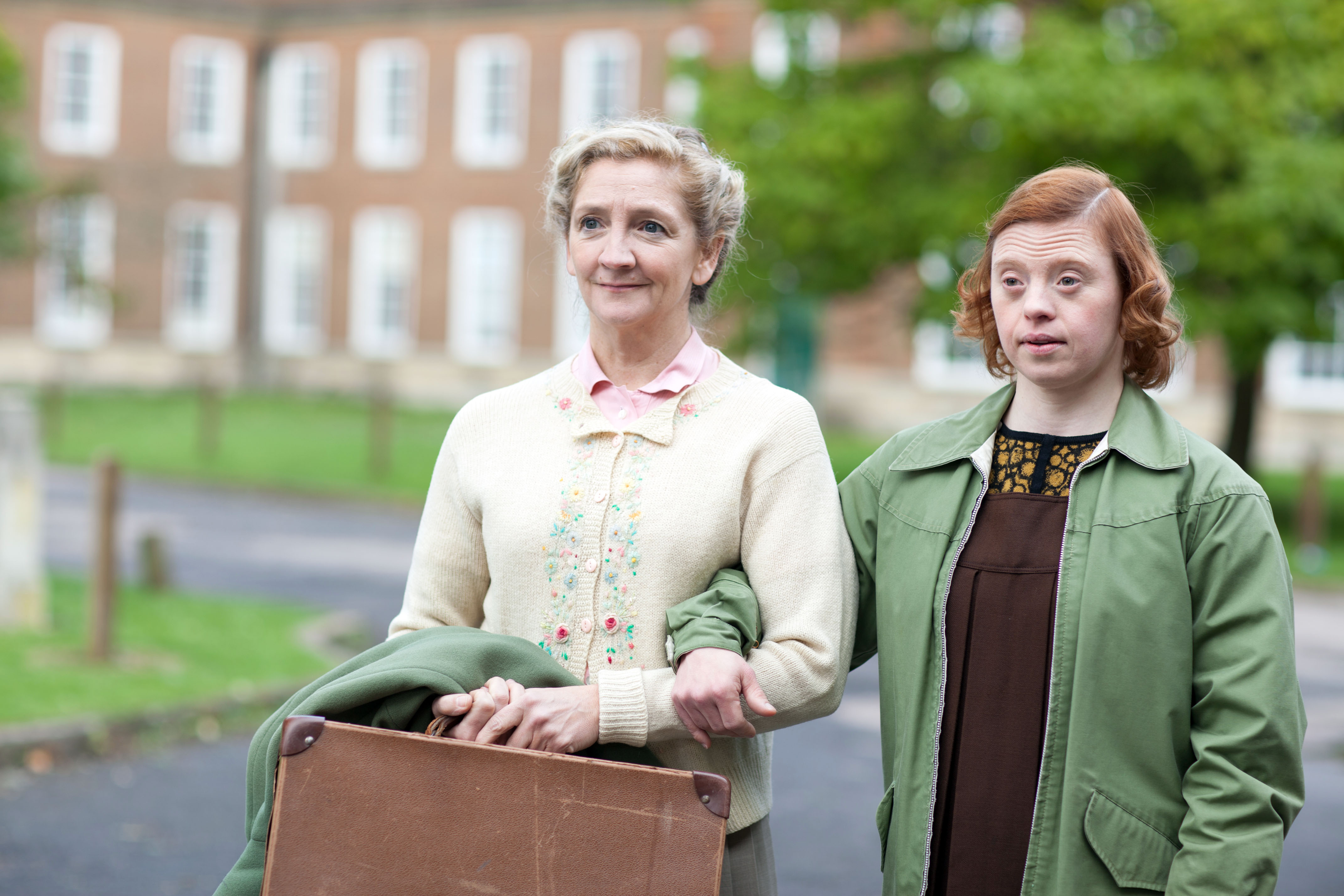 Dr. Turner determines Sally is around six months pregnant and is appalled that this situation involving a Mongoloid (his words, not mine) was allowed to occur. He contacts Miss Molyneux (Rosalind March), the administrator of St. Gideon’s, demanding that every male staff member and resident be questioned.

We later learn from PC Noakes that if the identity of the man who impregnated Sally is identified he would be arrested because it is against the law to have intercourse with a mental defective (his words, not mine).  Since Sally trusts Cynthia, Peter asks her to come with him when he goes round to her parents’ house to question her. In front of her parents and Noakes, Sally won’t talk, but she does tell Cynthia that she has a boyfriend at St. Gideon’s and she wants to go back.

According to Dr. Turner, they are not many cases of pregnancy amongst women with Down’s syndrome so he’s not sure what to expect.  They agree that rather than turn her over to the London Hospital where she would be subject of curiosity, Cynthia and Chummy will treat her condition as normal and look after her.

When Miss Molyneux’s assistant Jacob (Colin Young) a young man with cerebral palsy who lives at St Gideon’s hears the news about Sally, he looks up her parent’s address in the office and takes the bus to see her. (Jacob actually appeared in Series 2 as well when a couple had a baby with spina bifida and considered turning it over to St. Gideon’s.) Upon arrival, he admits he is Sally’s boyfriend and he wants to do the right thing and marry her. He loves her because Sally can see a side to him that “normal” people can’t. Her mother refuses his proposal and advises Jacob to leave before Sally’s father returns home. 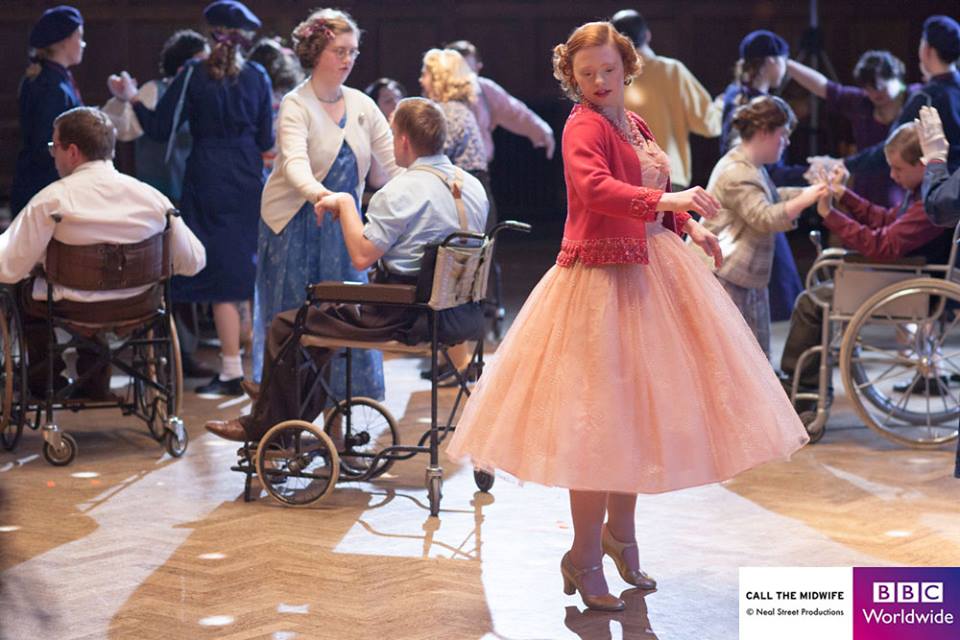 Cynthia returns to Nonnatus house with Jacob while Chummy stays with Sally and her mum.  Mrs. Harper talks about how she’s always hated the term Mongol because it’s a tribe abroad and nothing to do with her daughter. She feels guilty that she didn’t show Sally enough love and if she had maybe this wouldn’t have happened to her daughter in the first place.

Sally goes into labor early and is taken to the maternity hospital where she is attended by Chummy and Cynthia. Not entirely unexpectedly, the baby is stillborn and Poplar’s new vicar, Tom Hereward (John Ashton), visits Jacob to deliver the news. The Reverend also learns that the board of St. Gideon’s are recommending Jacob be moved to a males-only residence.

Jacob wants to fight the relocation, but realizes after speaking with Miss Molyneux, it’s a losing battle. He will be moved to St. Mungo’s in Scotland. Just as Sally is returning she is distraught to see Jacob being driven off in a taxi. Back in her room, she finds a sweater she borrowed for the house dance and a note left by Jacob.

Many people had to face the issues of reconciliation and letting go in this episode – Sister Evangelina and her brother, Sally and Jacob. Even Shelagh in her overprotectiveness of Timothy and her worries about her life’s purpose takes Sister Evangelina’s advice and trusts that God’s plan will be revealed to her in time. By taking Tim to the gait assessment clinic where he gets a chance to walk without braces for the first time, Shelagh takes a big step herself.

Tim at the Gait Assessment Clinic.jpg 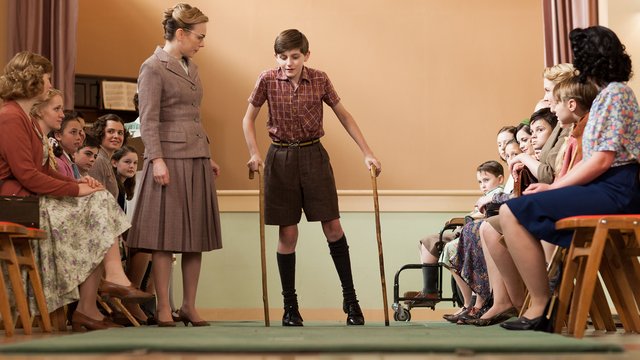 Let’s talk about episode five! Thumbs up or down for the addition of Nurse Mount? Did you like getting to see the softer side of Sister Evangelina? How well do you feel they handled the treatment of developmentally disabled people during this era? Please comment early and often in the space below.