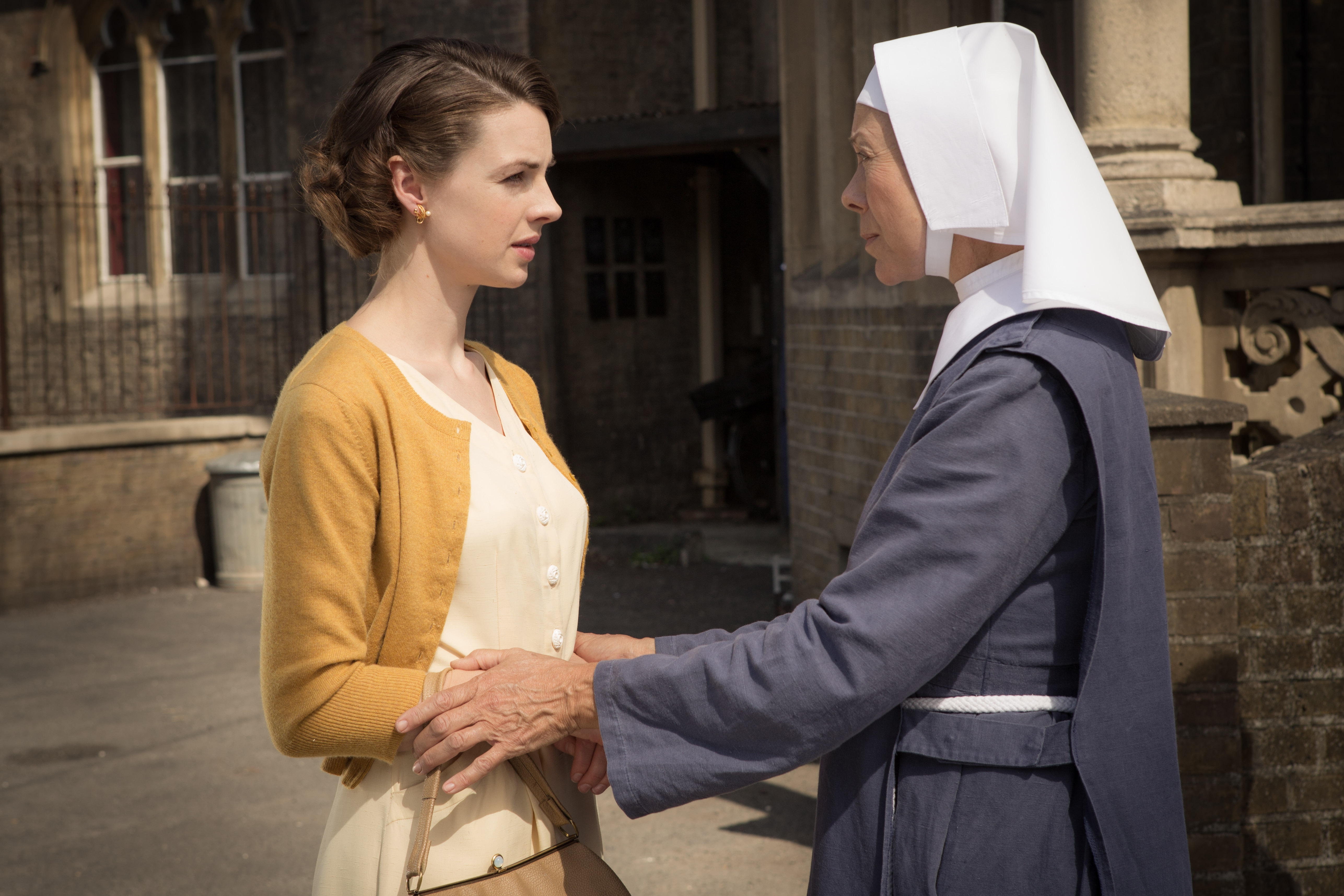 This week’s installment was rather eventful. Several residents of Poplar found new meaning in their work. One regained her freedom and another shockingly lost his life far too young. These stories intertwine to form a fabric of triumph and tragedy. I propose we begin our recap on a more inspiring note; the bad news can be put on hold for a little while.

First time mother Leah Moss (Orion Ben) has been waiting an hour for her prenatal checkup at the clinic. During her examination, she expresses an urgent need to return home and proceeds to ditch Nurse Lee when she nips out of the room to check some test results.

We quickly discover that Mrs. Moss’ anxiety has to do with her elderly mother whom she finds on the floor near a pile of vomit upon her return.  Mrs. Rubin (Beverley Klein) is prone to dizzy spells and according to her daughter hasn’t left her flat in twelve years.  Now with the baby coming, the family has the opportunity to make a better life in Northeast London since Leah’s husband has been offered a job to manage a shop there. The job includes a nice flat over the store and a garden in the back. Leah is hesitant about the good news because she knows her mother will be unable to join them, yet can’t be left there alone.

The midwives learn of Mrs. Rubin’s condition during one of their routine home visits and they urge Leah to consult a doctor for her mother. Leah refuses because she believes her mother has lost her mind due to the trauma and guilt from their time in the Nazi ghettos. Mrs. Rubin and her daughter escaped before they could be sent to a camp, but many of their friends and family weren’t as fortunate.

When Mrs. Rubin actually takes a tumble while Sister Winifred is there, the nun insists on getting Dr. Turner to attend to her. The good doctor says it’s most likely her dizzy spells are vertigo caused by an imbalance in the inner ear, a condition that can be treated. This news is a great relief to the entire family; however old habits die hard and it takes the incentive of her new baby granddaughter and a nudge of support from Sister Winifred to find her inner warrior that actually gets Mrs. Rubin out her front door.

Meanwhile Shelagh is trying to come to terms with the fact that she will not be having a baby. She takes the infant nightdress she had been sewing to Nonnatus House for the charity box and subsequently has a nice heart to heart chat with her trusted friend, Sister Julienne. The sister reminds Shelagh of her many talents and suggests that since she has such a lovely voice she should consider joining the Poplar Choral Society.

Unfortunately the first practice is unceremoniously cancelled since the group has quickly shrunk to a five members. Shelagh refuses their invitation to go for a drink at the local pub, but a seed has been sown in her determined brain.

Back at home having a relaxing smoke with her husband, Shelagh announces her intention to rebuild the choral society. And she starts off with a fervor, recruiting a trio of mothers she conveniently discovers at the antenatal clinic. Apparently they miss singing together like they did in school, but now they’re all mothers they don’t have the time. Shelagh asks them to come to practice and they can bring the babies along.

With a bit more arm twisting of colleagues and family members, Shalegh builds a nice little choir and gets a fine accompanist in the bargain, Timmy Turner (and not the one from The Fairly Oddparents.)

We also got to know Sister Winifred a bit better this week which was reassuring. I was beginning to wonder if she was going to stay in the background, picking nits for the rest of the series.

A reluctant Sister Winifred is sent along with Nurse Miller to deliver Kitty Chubb’s (yes, really) baby. It’s obvious there’s something about the experience that is troubling Winifred and that she can’t get out of the bedroom soon enough. In discussing it later with Cynthia, she explains that she was a teacher first, but in this order you train to be a nurse, then a midwife. While she finds the work to be important, she just doesn’t seem to get the same joy out of her work as the other midwives do.  Cynthia suggests that she try to feel the mother’s pain and then she will feel their joy.

In her work with the Moss family, Sister Winifred shows herself to be a support and comfort to Leah and Mrs. Rubin, but the real test comes when Leah goes into labor.  Jenny Lee and Winifred are dispatched for the delivery and the nun assumes her usual auxiliary position. However, when Nurse Lee is called away on a personal emergency, Sister Winifred is left with no reinforcements and must step up and deliver the child herself. The sister enlists the aid of Mrs. Rubin and finally doesn’t shy away from her duties.  In the end, mother, grandmother and midwife all experience the joy of a new life brought forth.

I warned you this was coming, the tragic strand of the episode. It begins innocently enough. Alec asks Jenny to accompany him to Brighton for the weekend. They will stay in a nice hotel, eat seafood, and take romantic strolls on the pier no doubt. Alec even jokes about them dancing like Debbie Reynolds and Gene Kelly. Jenny is amenable if not excited about the trip; it’s an excuse to buy an expensive dress anyhow.

Later in the week, Jenny stops by the site where Alec is working and encounters Clive, Alec’s uncouth co-worker who makes insinuating remarks about Jenny and Alec’s trip together. Nurse Lee gets annoyed with Alec for discussing their plans with this unpleasant man and begins to wonder if her assumption that Alec had booked two hotel rooms was incorrect. She leaves in a somewhat prissy huff.

Did anyone else assume that when Jenny had been seeing a married man just prior to coming to Nonnatus House that she had been sleeping with him? This series of events has made me wonder if my prior supposition was wrong.

Anyhow, back to the story. Shortly after Jenny’s departure, Alec admonishes Clive for offending Jenny and making her upset with him. Then, you know we all saw it coming, Alec, perched atop the landing of a rickety staircase, falls a story to the ground. Clive runs out to the street and encounters PC Noakes who stays with Alec while the other man calls for the ambulance and tracks down Dr. Turner.

Upon examination, the doctor finds Alec has a shattered ankle and a compound fracture to his leg. He does what he can to save the leg and the seriously injured Alec is taken to hospital for surgery.

Jenny hears the bad news of Alec’s accident from Cynthia including the fact that his foot could not be saved. Jenny is exhausted with emotion and perhaps a bit of guilt. Fred offers her his midnight meal and gives her a comforting hug.

At the hospital, Alec is dismayed by the loss of his foot but happy to be alive nonetheless. He and Jenny make up and talk about plans to reschedule the Brighton trip and to go to Paris as well. Jenny leaves relieved about his condition and goes back to work, only to be pulled away from Mrs. Moss’ delivery to return to the hospital where Alec has taken a turn for the worse.

By the time Nurse Lee has peddled her way through Poplar, she arrives too late to say goodbye to Alec. He has already passed, probably from an embolism.  In shock, Jenny leaves the hospital and goes to Alec’s boarding house. Among his things, Jenny finds the note he made for two reservations at the hotel in Brighton under D. Reynolds and G. Kelly.

Jenny decides to return the dress she bought for the Brighton trip and in the street she and Cynthia encounter Mrs. Moss, her new daughter Elizabeth, and Mrs. Rubin. They offer their condolences and Mrs. Rubin gives Jenny this piece of hard-earned advice. She will feel better someday, but for now Jenny needs to just keep living until she feels alive again.

Alec’s funeral will not be attended by his parents as his father is at sea and his mother “lives abroad.” (They couldn’t wait for her to get there?) Many people from the community attend the funeral including Shelagh’s new and improved Poplar Choral Society which features several of the midwives, Peter Noakes and Dr. Turner.

After the ceremony, Jenny prepares to leave Popular to spend her compassionate leave at the mother house in Chichester. The nuns and midwives gather outside to say their goodbyes. While Sister Evangelina’s awkward insistence that Jenny eat three meals and a good breakfast each day and her friends’ promises to write often were touching, it is Sister Monica Joan’s poignant recitation of the James Henry Leigh Hunt poem called “Jenny Kissed Me” that will bring tears to your eyes.

I think this episode did step up emotionally from some of this season’s earlier stories. Highlights were a heart-breakingly controlled performance by Jessica Raines as Nurse Lee and Judy Parfitt’s (Sister Monica Joan) wise but cryptic gibberish is always a wonder to watch.

How did you feel about this week’s installment? Please share your thoughts with fellow Call the Midwife fans in the comment section!