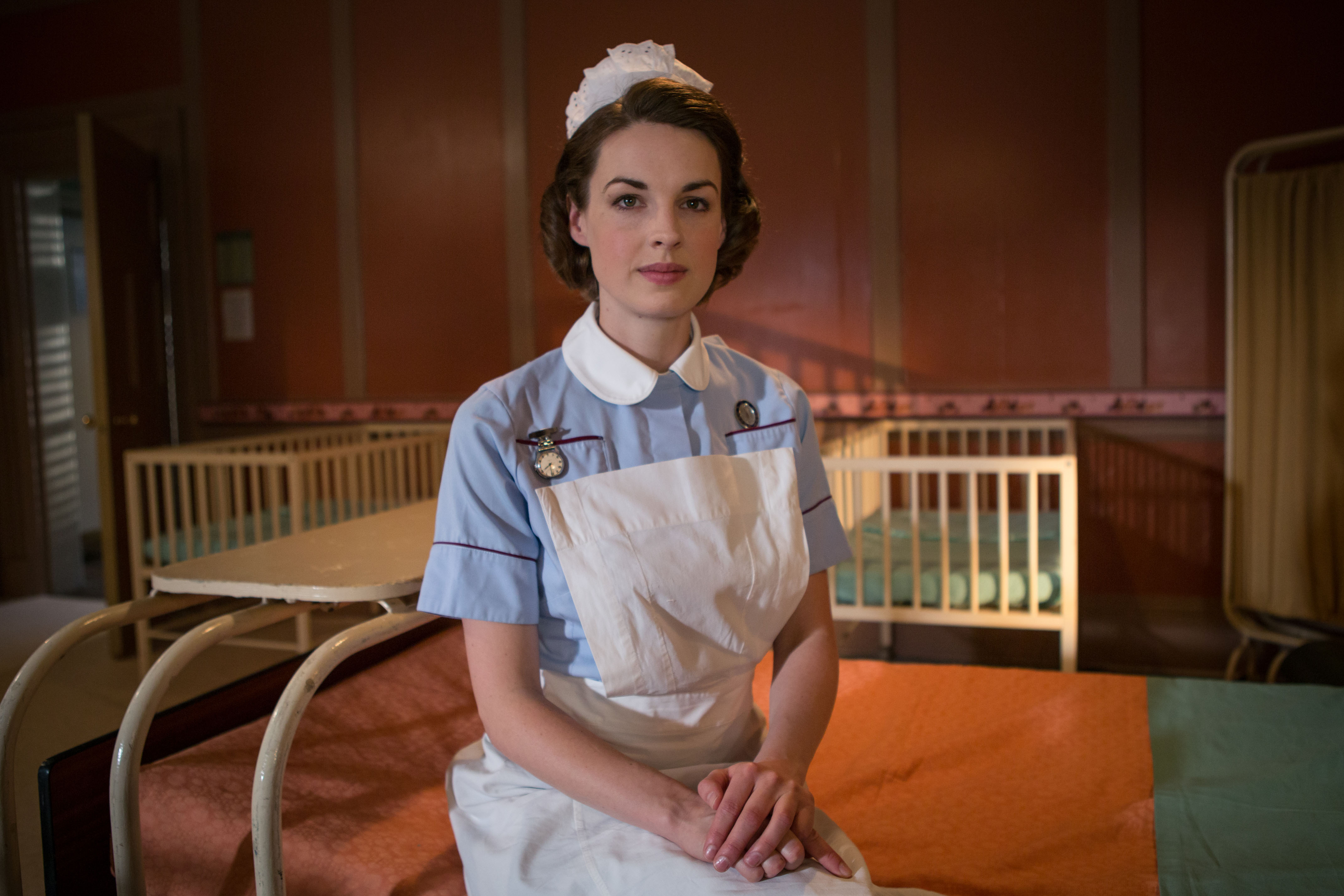 Previously on Call the Midwife: Catch up on all the events of last week's episode in the Series 3, Episode 3 recap, which is right this way.

Three very different stories of motherhood are woven into this week’s episode of Call the Midwife. There’s a lot to cover so let’s get right to it, shall we?

Sister Julienne and Trixie have been called on to fill in for the midwives normally assigned to Holloway women’s prison. There in that smelly, rundown institution the midwives encounter Stella Crangle (Lacey Turner), an unmarried young inmate who was incarcerated for theft. Due to deliver any day, Trixie orders her to finish her pregnancy on bed rest; however; Stella continues to work since she needs the money to start a new life with her merchant marine fiancé, Joe, and their baby.

When the sister and Nurse Franklin return the next day, they find Stella has been bullied into a cat fight with another pregnant inmate. Tough room! For her part in the fight, Stella must report to the governor of the prison to be disciplined. She fears this will hurt her chances to keep her baby when she is released from jail soon.

But Sister Julienne considers Stella a special case, a girl who was orphaned and whose education was disrupted during the war. If circumstances had been different, Stella might have been in a vastly better situation to the one in which she currently finds herself. Sister Julienne also notices that Stella is trying to teach herself to read and write and encourages her to continue her studies by giving her a copy of Peter Pan to tackle.

Soon Stella goes into labor and, with the help of her midwives, delivers a healthy baby boy whom she decides to name Peter. (Well, she can’t call him Julienne can she?)  Sister J. tries to track down a merchant ship with the aforementioned fiancé in its crew but with no success.

But when the infinitely helpful nun agrees to be the character witness at Stella’s board hearing, the new mother realizes she must come clean and admit that she does not have a fiancé. In fact she is all on her own when it comes to raising the baby.

Sister Julienne cannot in good conscience lie to the prison governor about Stella’s relationship status though still advocates for the young mother keeping her child. The prison official indicates that odds are Stella’s baby will be removed from her care. Thus the sister makes it her mission to find Miss Crangle a job and accommodation before the board meets to decide the fate of mother and child.

It appears all is lost when Sister Julienne is a no-show at the hearing. Stella is awaiting the verdict of the board when the nun arrives just in time to learn they are taking Peter from her custody. Julienne asks them to reconsider because she has secured Stella a job with the Mother’s Hospital in Hackney as a cleaner, a position which includes lodging and childcare. All this is done on the sister’s good word and reputation and the board agrees to let Stella keep her baby boy.

Once she is settled, Stella sends the nun that never stopped believing in her a heartfelt thank-you note written in a sweetly childish scrawl. You know Sister Julienne is going to keep that letter in her special memento file forever.

Story two involves a first-time mother with problems in perception and confidence more than the life-altering concerns that faced Stella.

Kathleen Baker (Hannah Tointon) is a pretty young bride with a handsome husband and a baby on the way. She is suffering from painful varicose veins for which she will not wear the prescribed support hose. When her blood pressure becomes elevated, Jenny Lee decides Mrs. Baker must be checked into the maternity hospital for the remainder of her pregnancy.

This mother-to-be’s concern is not so much her own vanity, but her fear of losing the interest of her husband who apparently could have had the pick of any girl in Poplar. She’s afraid he won’t find her attractive anymore and after the episiotomy required to deliver their larger than average baby girl, she has something else to worry her pretty little head over.

Of course in the end, Stan Baker, though freaked out by the sight of his wife vomiting after giving birth, is a good bloke who wants to protect and take care of his bride.  If possible, he’s even more besotted with Kathleen for giving him a lovely new daughter, Anna. 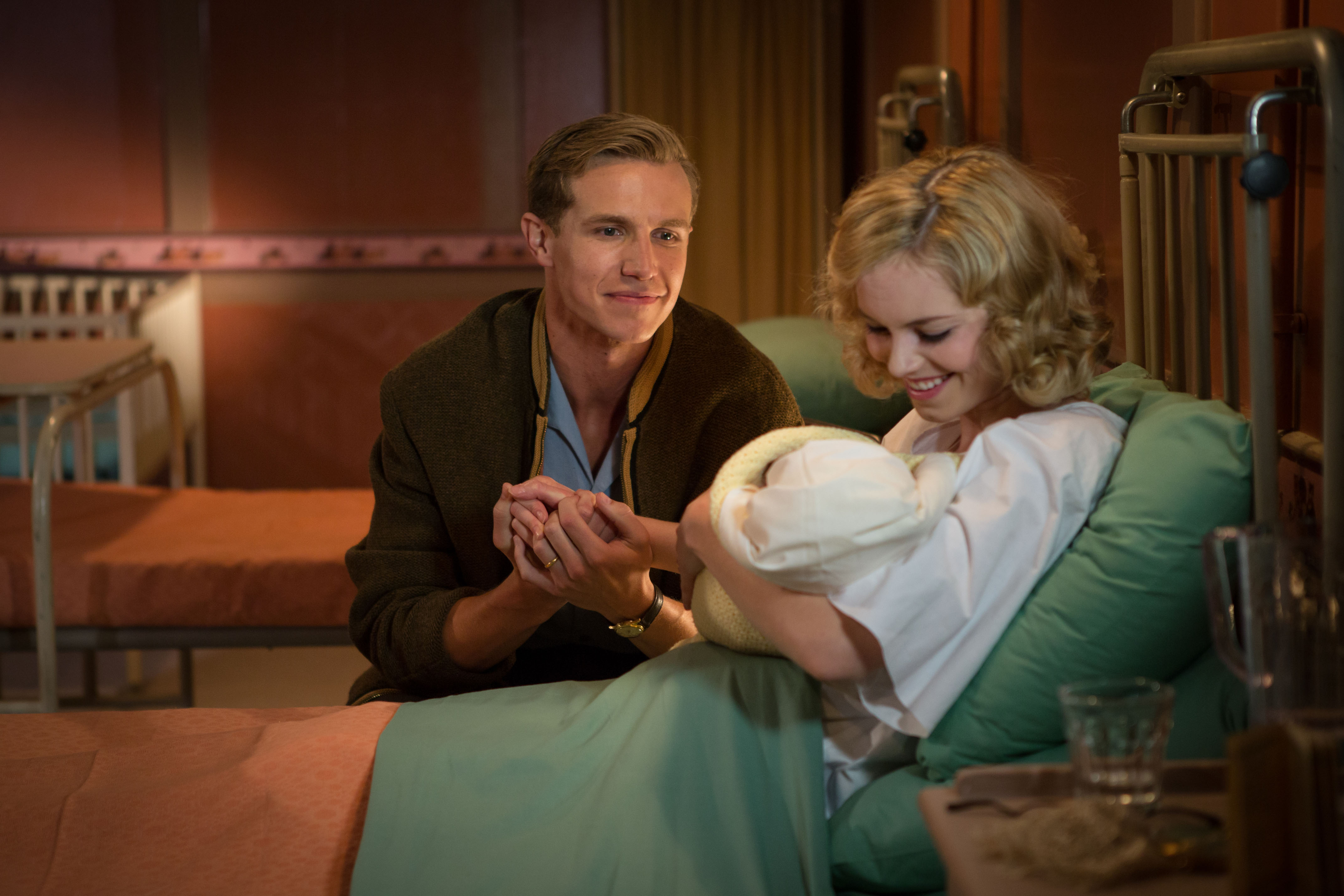 The final strand of our motherhood tale alas didn’t end on a cheery note. Shelagh having gone three months without a period has decided to send in a pregnancy test to the hospital. (She can do that sort thing being a doctor’s wife and all). She wanted to keep it from Patrick until she got the results back, but the test required a doctor’s signature. (A former nun is too honest to resort to forgery, I suppose).

Shelagh’s hesitancy and concern stems from the fact that she has experienced no other symptoms of pregnancy. Though Patrick tries to ease her mind, he has a gynecological colleague lined up to see her when the test inevitably comes back negative. Shelagh is examined under anesthesia and the results are bad news indeed. As she had feared, the bout of TB she suffered earlier caused scar tissue to form in Mrs. Turner’s pelvis. A tissue biopsy will be performed but Shelagh knows as well as the doctors, this diagnosis means she will not be able to conceive.

Lest you think Jenny Lee has abandoned her tendency towards angst in the romance department, dear sweet Alec said the three little words most girls want to hear strung together by a lad.  Nurse Lee freaked out and just pretended not to hear him. Then she tried to avoid him – very mature –until he backed off his initial declaration of “love” to “like very much” or some such nonsense.

On the lighter side- unbeknownst to Fred, he bought counterfeit My Fair Lady tickets from a respectable looking couple on the docks and sold them on the midwives as a present for Chummy’s birthday. No matter, after a bit of embarrassment at the theatre, the birthday party which included Trixie, Cynthia, Jenny, Alex, Peter and Chummy relocated to a nearby pub for a fun night of drinks and darts. Sister Evangelina later encountered the con artists peddling their fake wares and came back to Nonnatus House with a refund for the midwives.

And finally, this happened… 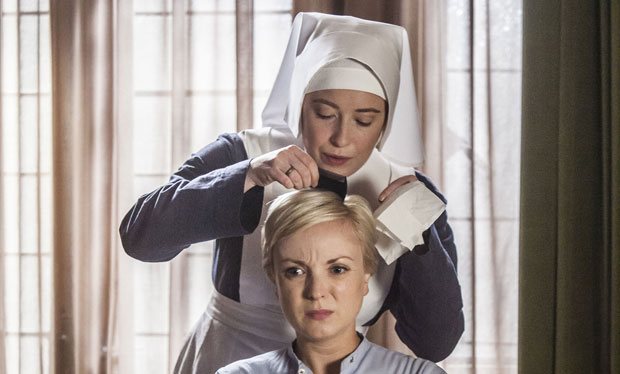 Is this why Sister Winfred came to Poplar, to pick nits out of other midwives’ hair? Sounds like a huge waste of a healthcare professional to me.

So how do you rate Episode 3?

Can I have a second in my nomination of Sister Julienne as the most sainted figure ever in the Anglican Church?  Is Jenny Lee getting on anyone else’s nerves besides mine? While devastating for the time being, surely the Turners could provide a loving home for any number of unwanted infants in East London. What do you wager they have a little one by the end of the series? And don’t you love how Chummy refers to baby Fred as Young Sir? Let’s hope she gets a big juicy story again soon.

Please join us to chat about all things “midwife” in the comments area below!