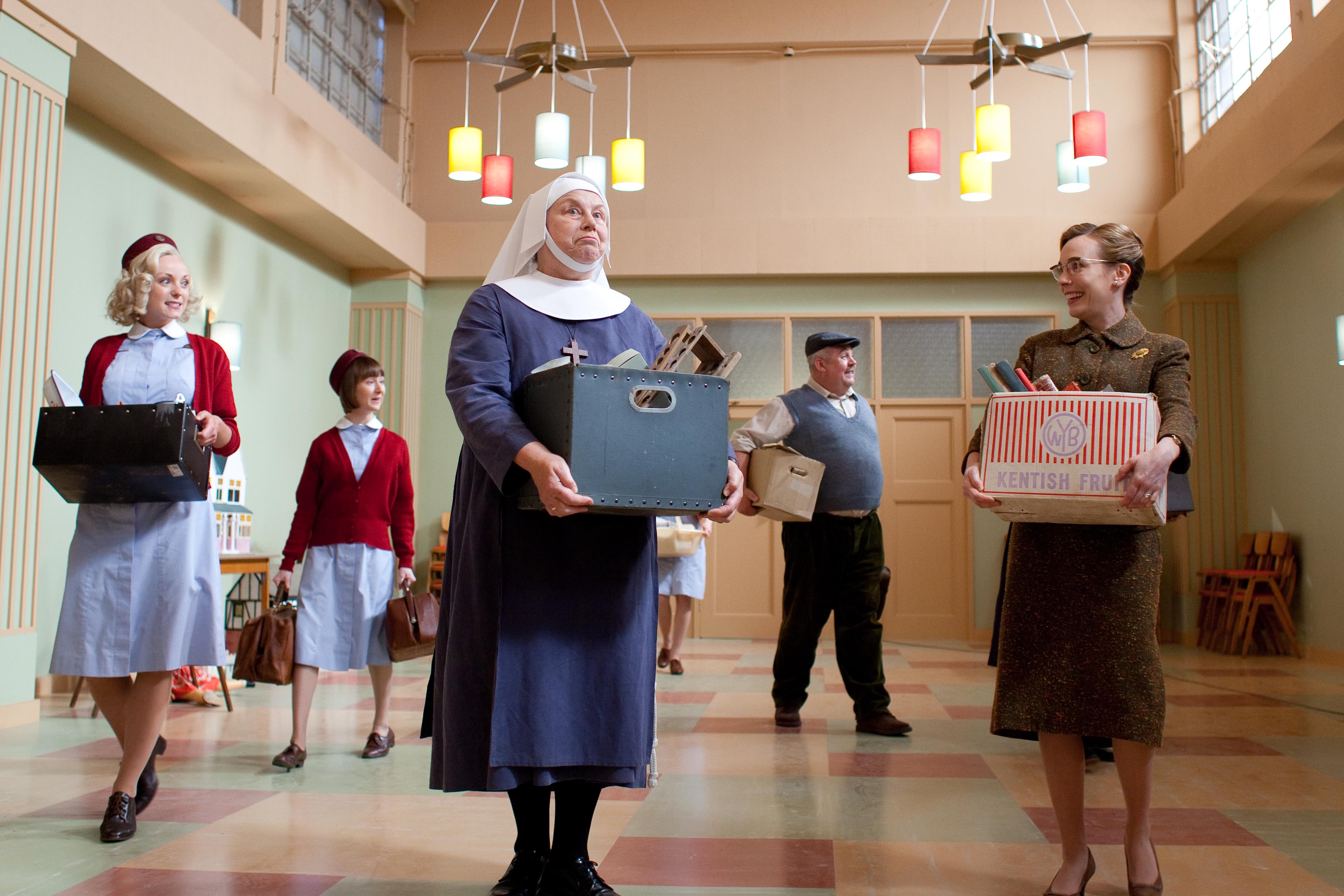 Welcome back to a new season of "Call the Midwife"! (All Photos: Courtesy of Laurence Cendrowicz)
Welcome Carmen to the fabulous and fun world of Telly Visions recaps! She'll be handling Call the Midwife this season, as we thought it'd be fun to finally give fans of that show a space to talk about the new episodes, same as we've done for Downton Abbey, Sherlock and Mr. Selfridge fans. Or, you know, just for any of you that don't want to slog through my several thousand word missives on those other shows. (For those of you that are wondering, I'm still on duty for Mr. Selfridge recaps but as some of you might have already guessed, I'm out of town at the moment, so that'll be going up in the morning. I'm sure it'll still be predictably massive.) Enjoy!

I am happy to be here to share the return of Call the Midwife with the many fans of this dramatic, touching, and dare I say it, life-affirming show. It has come back in fine form and includes all the elements avid viewers have come to expect.

This first episode of the new series is very much about change. The midwives are finally reuniting and settling into the new and improved Nonnatus House. In fact, the place is quite luxurious compared to their previous digs.

Within the house, Trixie and Jenny become roommates for the first time and a replacement nun, Sister Winifred (Victoria Yeates) has arrived to fill the void left by the Sister formerly known as Bernadette. 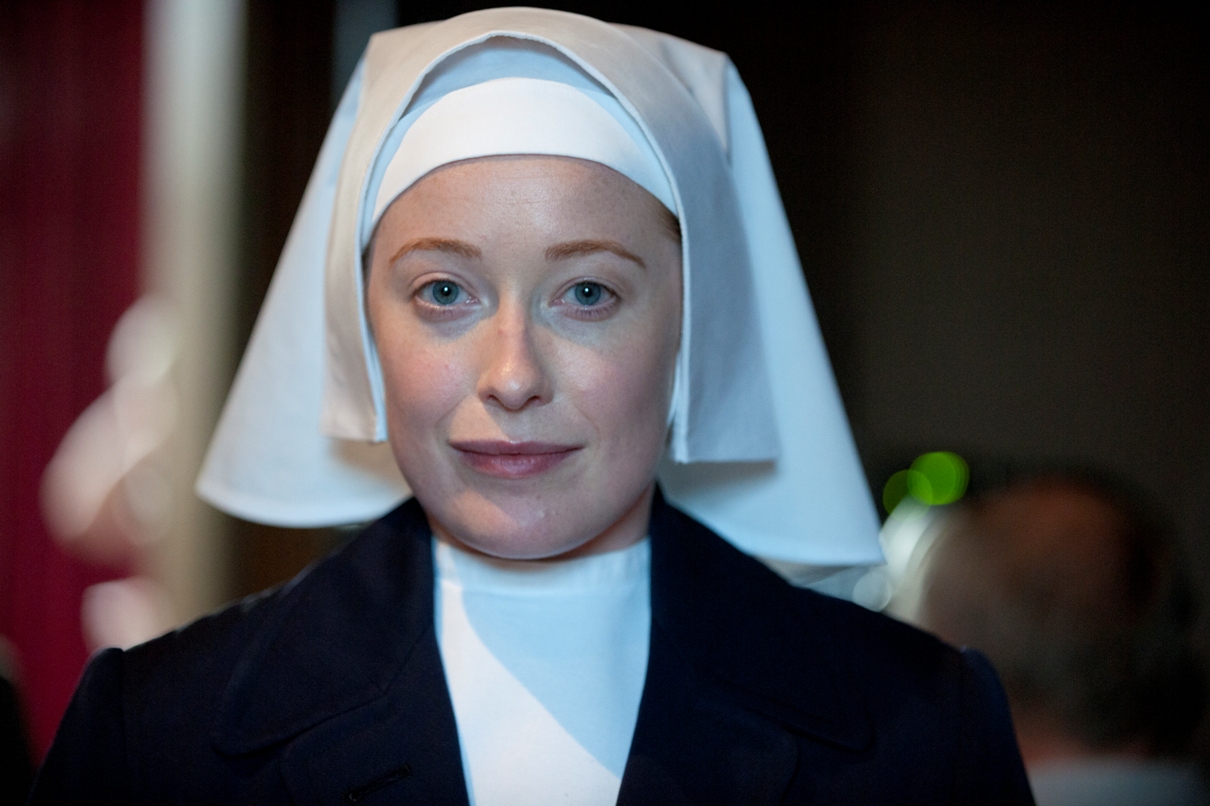 Speaking of the new Mrs. Dr. Turner, no surprise here, Shelagh adoringly expresses her wish to have a baby with her husband. I have not read any spoilers nor watched ahead at this point; however, I suspect the pitter patter of little feet will not be an easily achieved goal for this long suffering couple.

In the meantime, Dr. Turner scouts out an alternative location for the antenatal clinic in the neighborhood’s community center and apparently has big plans for the place. With the clinic open twice rather than once a week, the midwives could offer classes on mothering skills and general health issues. Unfortunately, getting the word out to the families is slow going and that’s where Chummy’s storyline begins.

Since becoming a housewife and mother, Chummy’s life has become a bit of a bore.  For a woman with her skills and energy, a small house and one little baby is not enough to keep her mind occupied.  When she learns the antenatal clinic has been poorly attended, Chummy jumps at the chance to help her former co-workers out. When distributing flyers does little good, Chummy makes it her mission to get the clinic on its feet.

From forming ladies craft groups to moving the Scouts’ meetings into the community center, Mrs. Camilla Noakes struggles mightily to achieve her goal without much success. That is until she seizes the opportunity to write a letter to Princess Margaret entreating her to visit Poplar’s community center to bring attention to its excellent health services for mothers and children. 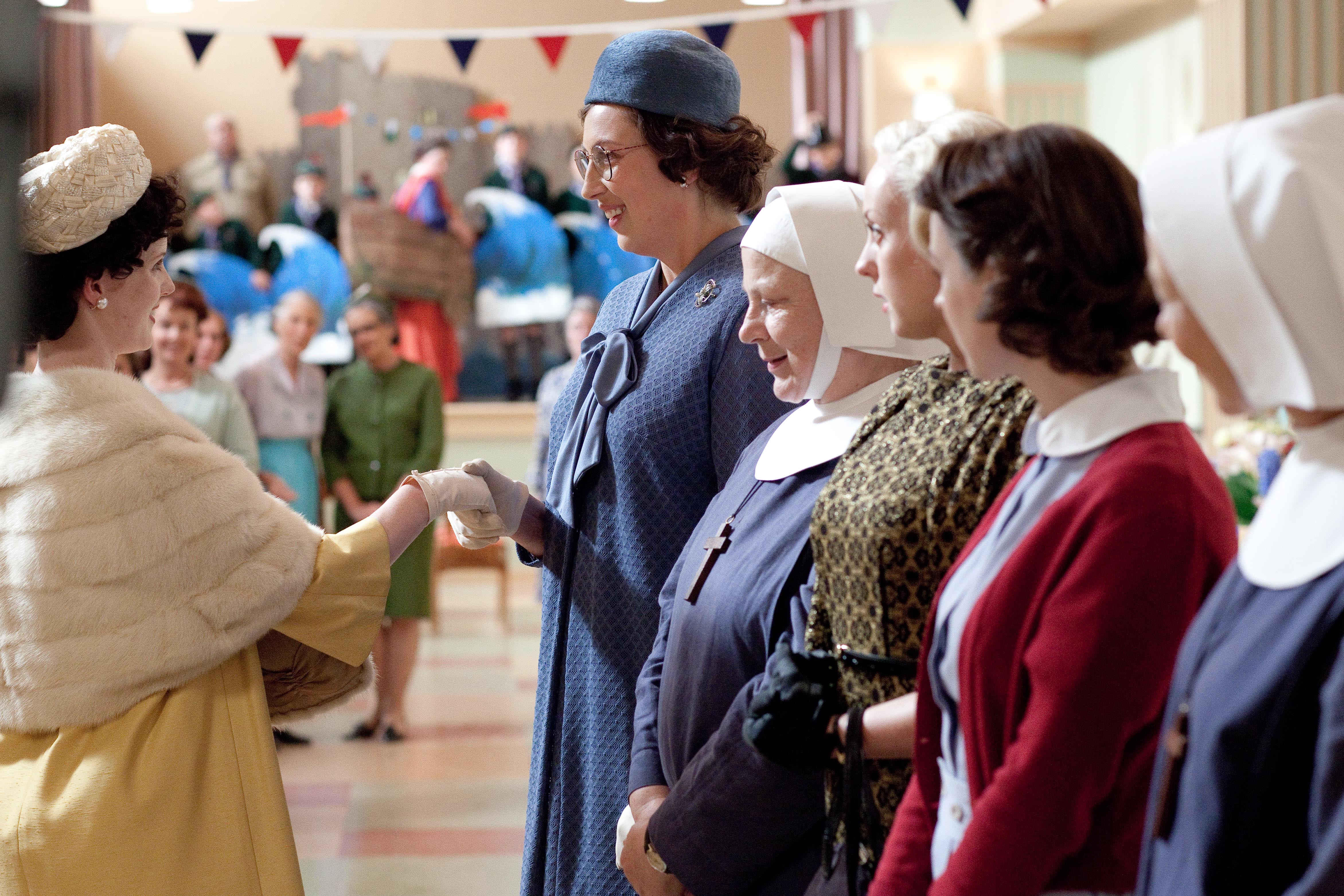 But the real payoff of Chummy’s story is that on the way home from her royal triumph she encounters a hardened mother of four who has gone into labor and is clearly in distress. Chummy has not forgotten her training and is elated when she’s able to help the mother through a difficult delivery. Later Sister Julienne comes to Chummy inquiring if she is willing to return to work as a part-time midwife (if her husband permits it).  Chummy’s calling has been restored and she’ll surely be a busier and happier woman for it.

One thing that hasn’t changed is the mainstay of a central plot line which ties the Poplar community to the midwives. This week that story concerns Merle and Billy Vickers who are raising a pair of young, chronically ill sons who are obviously failing to thrive. Merle is overwhelmed by the needs of two sick children and fears she will be considered an unfit mother.

Meanwhile, Sister Monica Joan, who overhears Jenny discussing the boys’ symptoms, is sure she has seen the ailment mentioned in one of her ancient medical books.  Sister Evangelina dismisses this as more of Monica Joan’s dementia-ridden babble, but later admits she’s always been a doer and never had much use for books. It was a rare moment of understanding between the two most contentious nuns in the convent.

In the end Sister Monica Joan is proven right about her recollection of an antiquated description of what we now know to be cystic fibrosis, a condition the boys inherited from their parents who were both carriers of the disease.

While I usually find the stories of the Poplar families to be compelling and uplifting, this one fell a bit flat for me.  Whenever they came back to the Vickers’ story, I just wanted to return to Chummy’s quest or witness all the adjustments to be made at the new Nonnatus House. It also felt as if something similar had been done before so it didn’t engage me as much as the rest of the episode.

Overall though, I have nothing but praise for this installment of Call the Midwife. It was poignant and as humanizing as ever. Now it’s your turn to chime in on what you thought of episode one and your hopes for series three.  Will Sister Winifred change the dynamic of the house? How many times will we be brought to tears?  Let the chatting begin!