Karen Gillan in "Oculus" (Photo: Relativity Media)
Former Doctor Who companion Karen Gillan has certainly kept herself busy since she exited the TARDIS back. And her goal appears to be trying roles in every kind of project. She’s since starred in an indie romantic comedy called Not Another Happy Ending and landed the role of a major sci-fi villain in upcoming Marvel tentpole Guardians of the Galaxy. She’s also playing the lead role in a creepy new horror film called Oculus, which has released its first official trailer.

Gillan, who rose to international fame as sidekick to Matt Smith’s Eleventh Doctor, stars as Kaylie Russell, a young woman who attempts to prove that her brother Tim did not murder their parents by insisting that the real culprit was a malevolent supernatural force that lurks in a particular mirror in their house, which may have also been responsible for the violent deaths of many others over the years.

The story jumps back and forth in time, flashing back to the siblings as children with their mother and chronicling the various misdeeds perpetrated by the mirror and whatever may or may not lurk within it.

This sounds kind of crazy, admittedly, but the trailer makes the premise look a heck of a lot more interesting (and disturbing) than you might think.

That bit with the apple is kind of mega-creepy, right? It’s lovely to see Gillan getting such a big role here and, well, I’ve always had a soft spot for horror flicks, no matter how weird they might turn out to be, so I’m there.

Written and directed by Mike Flanagan, Oculus premiered at the Toronto International Film Festival last year, and has been making the circuit of various film festivals ever since to what largely appear to be rave reviews thus far. Brenton Thwaites, Rory Cochrane and Battlestar Galactica’s Katee Sackhoff also star.

Take a look at the official poster (which is also incredibly creepy) below. 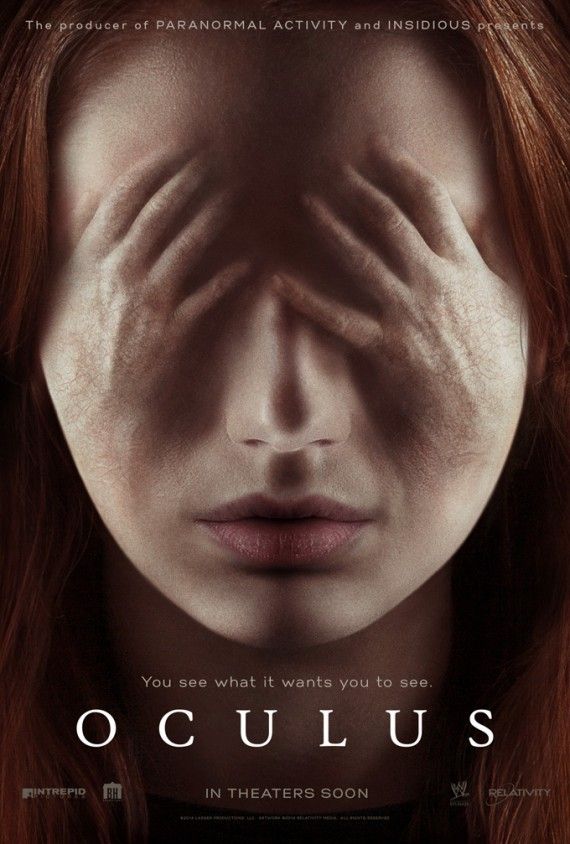 Oculus is set to open in the US on April 11 and in the UK on June 13 – so mark your calendars!

Thoughts? Is this the kind of movie you’d see Gillan in? Or would you prefer to wait for Guardians of the Galaxy?