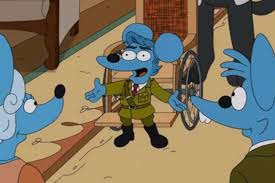 The Itchy Version of Matthew in Series 2. (Photo: Fox, screenshot via Vulture)
It’s official – literally everyone has made a Downton Abbey parody. Or so it seems.

It’s not enough that long-running pop culture staple The Simpsons already did a version of the show’s opening credits in the style of Downton last year, this time the show has decided to feature the mega-hit costume drama as part of its incredibly violent in-series cartoon The Itchy and Scratchy Show.

Because nothing says posh period costumes and a rigid class structure like buckets of animated violence, right?

In this spoof, entitled Downton Tabby, the Crawley family is made up of Itchys (the mice) and Team Servants is surprised of Scratchys (the cats). What follows includes death by various period drama staples – including standard items like silverware and teacups, and more Downton-specific paraphernalia, such as Matthew’s crutches and the newfangled phone that Carson and the Dowager dislike so much.

And there’s also a whole lot of animated blood, and it’s all set to the recognizable Downton theme music.

The best bit is definitely the part where the Itchy I’m assuming is supposed to represent the Dowager Countess gleefully dispatches a Scratchy with her decorative umbrella. It's kind of amazing.

What do you think? Are you burned out on Downton parodies or is this one just out there enough to be fun? Is there a show you like that hasn't gotten on the Downton bandwagon yet? Do tell!