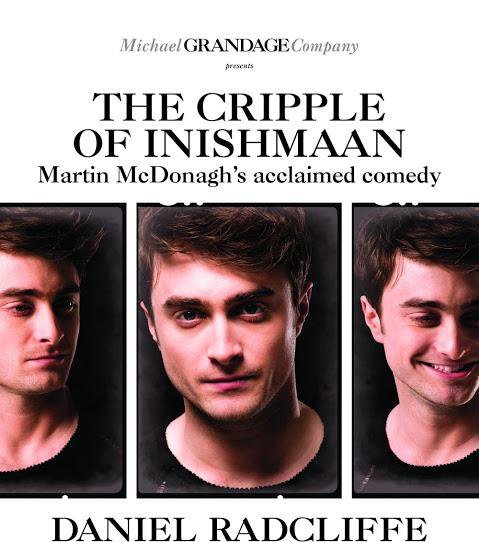 Poster for "The Cripple of Inishmann's West End run (Photo: Michael Grandage Company)
Harry Potter star Daniel Radcliffe is headed back to the Great White Way this Spring! He’ll be starring in a Broadway version of Martin McDonagh’s dark comedy The Cripple of Inishmaan, reprising his role from last year’s West End production at the Noel Coward Theatre.  The entire London cast from that Michael Grandage-directed revival will also transfer to Broadway along with Radcliffe.

McDonagh’s play is set in the 1930s and the story centers on the inhabitants of a small Irish island stirred up by the news that a Hollywood movie is filming nearby. Radcliffe portrays the titular cripple, who want to be in the film more than anything, if only to escape the tedium of his daily life. This will be, incidentally, the first ever Broadway production of Inishmaan.

The play will open at Broadway’s Cort Theater in April, following the close of Ian McKellen and Patrick Stewart’s Becket/Pinter double-header of No Man’s Land and Waiting for Godot.

It will play a strictly limited engagement from April 12 – July 20 and for those who’d like to see some theater without breaking the bank, the production will make 10,000 tickets available for $27.

Inishmaan comes to Broadway after a successful run in London’s West End last summer, as part of the Michael Grandage Company’s ambitious 2014 theatrical schedule that also featured plays starring Dame Judi Dench, Ben Whishaw and Jude Law. Grandage himself– the former head of the Donmar Warehouse who left to start his own commercial producing entity – will reprise his role as director here in the US. (Having seen Grandage’s Peter and Alice with Dench and Whishaw last year, I can’t say enough good things about his abilities. Stunning work.)

Radcliffe also won critical acclaim for his West End performance, and this will mark the Harry Potter star’s third appearance on Broadway, following lead roles in the 2008 revival of Equus and the 20011 revival of How to Succeed in Business Without Really Trying. This is another very different sort of role for the actor best known as the Boy Who Lived, so it’ll be interesting to see how his existing fanbase reacts to the role.

Road trip, anyone? Would you like to see Radcliffe on Broadway?