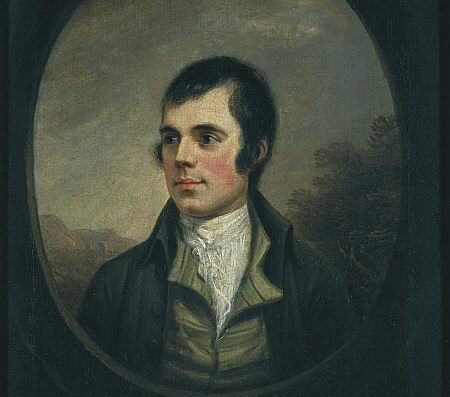 Portrait of Robert Burns by Alexander Naysmith. (Photo: Wikimedia)
You don’t have to be a poetry fan to be familiar with the work of Scottish national poet, Robert Burns. In fact if you’ve ever sung Auld Lang Syne at a New Year’s Eve party, you have performed a piece of Burns’ work.

So beloved is Burns to his fellow countrymen that he was named the greatest Scot of all time in a STV poll in 2009. In fact, Burns’ birthday is celebrated as an unofficial Scottish holiday with suppers held in his honor on or around January 25th. These traditional gatherings are organized around the world, in people’s homes and in swanky halls. No matter where it’s held or how fancy the event, however, there are certain elements that are a part of all Burns’ suppers.

Just a quick look around YouTube will demonstrate the range and scope of these celebrations in honor of Scotland’s favorite son.

Just in case you don’t have plans to attend a Burns Night Supper this weekend, here are a few selections that will transport you to the land where Burns created his poetry and songs and gained his status as a national treasure.

Red Rose – The only film I could track down that has attempted to dramatize the life of Robert Burns, Red Rose, is an indie film from 2005. The trailer doesn’t really give you much to go on as far as the film’s content is concerned (except that Mr. Burns really liked the ladies). However it apparently does address his career and political views as well as his ill health and death at the early age of thirty-seven.

If you’d like to learn more about the man who we celebrate today, Red Rose is available to stream on Amazon Instant Video or to purchase on DVD.

Oddly enough, although no other movies or mini-series have been made about our dear Rabbie, there have been plans in the works for almost a decade now to produce a Burns film that would employ the talents of Gerard Butler, Brian Cox and Julia Stiles among others. In a Scotsman newspaper article Butler was quoted as saying about the project, “I’m sure, at the end, you can never keep everybody happy, especially the Scots – I hate to say this – if you’re dealing with one of their national heroes. No matter what way you do it, there’s no way you’ll keep everybody happy. So I’ll expect some praise and I’m sure I’ll get a lot of abuse.”

Robert Burns wrote the lyrics to the patriotic Scottish song Scots Wha Hae which was long considered the unofficial national anthem. In it, he refers to both Robert the Bruce and William Wallace, two warriors who led the Scots to regain their independence from England in the early 1300’s.

The Bruce, a 1996 film about Robert, King of the Scots is quite difficult to track down so I went with the more well-known choice.

Braveheart – This film dramatizes the legend of William Wallace (Mel Gibson) portraying him as a man who wanted to live peacefully but who would not sacrifice his freedom or that of his countrymen. This sweeping 1995 epic went on to win five Oscars, one being for the beautiful cinematography that put the majesty of the Scottish Highlands (and Ireland) on display.

Braveheart is available to stream on Amazon Instant Video or to order on Netflix DVD.

The Book Group – If you’re looking for more modern Scottish fare, you might like this sitcom with a literary twist.  A new arrival to Glasgow, American Clare Pettengill (Anne Dudek) organizes a book group in the hopes of meeting some like-minded intellectuals.  What she gets instead are a trio of bored footballers’ wives, a drug addicted student with an air of superiority, a uncultured football fan who could care less about books and a gentle giant of a man who, though confined to a wheelchair, aspires to be a successful writer. Clearly Clare is a bit disappointed by the turnout.

Also starring the very funny Michelle Gomez and the very tall Rory McCann, both series of Channel 4’s The Book Group can be streamed on Hulu. From Jack Kerouac to Gabriel Garcia Marquez, the group’s discussions always seem to come around to how the novels apply to their current life situations. Not sure if they ever read any poetry by Burns though…

In 1786, Burns left his life in the countryside to go to Edinburgh to make his name as a poet. Though he only stayed for a little over a year, he made enough of an impression that the city erected a monument to him.

Rebus – If you’d like to see the Edinburgh that Burns might have experienced, the Rebus mystery series is a good choice. There are plenty of location shots, particularly in the Old Town section of the city.

Based on the very popular police detective novels by Scottish author Ian Rankin, Rebus is a veteran detective who isn’t on what you’d call the fast track. In fact, he doesn’t have much regard for police protocol much of the time. Compassionate when dealing with victims, Rebus is always committed to solving the case.

In the four series of this crime drama, two Scottish actors have played Inspector Rebus. John Hannah originated the role for the first two series and was followed by Ken Stott (who I feel was the more appropriate choice for the part) in the subsequent two series.  Netflix offers Rebus through their DVD option.

Hamish Macbeth - And finally what could be more Scottish than a melancholy tune on the bagpipes for a police constable’s loyal and beloved West Highland Terrier?

I can’t really think of a specific Burns’ connection for Hamish Macbeth. Nonetheless this adaptation of M.C. Beaton’s series of cozy crime fiction stories set in the enchanting yet quirky village of Lochdubh is a pleasing way to spend a few hours on a cold January evening.

Robert Carlyle stars in title role along with Shirley Henderson as Isobel, a feisty newspaper reporter and one of Hamish’s love interests. No womanizer by any means, Macbeth certainly has trouble making up his mind about the ladies in his life…Sounds a bit like Rabbie Burns, doesn’t it?

All three series of Hamish Macbeth are available through Netflix DVD and I would guess it might air on your local PBS channel from time to time.

I hope you enjoy this Burns themed banquet and find something from the list that suits your taste. So let’s raise a glass and recite the traditional Selkirk Grace:

Some hae meat and canna eat,

And some wad eat that want it,

But we hae meat and we can eat,

And sae the Lord be thankit.